There are times that make you wonder which side the brass is on. As Homer made clear in The Iliad, … Continued 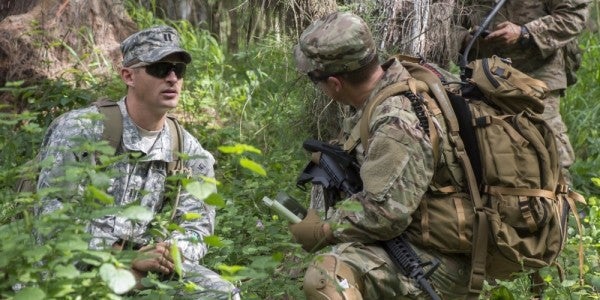 There are times that make you wonder which side the brass is on. As Homer made clear in The Iliad, it’s the ground pounders who suffer the consequences when headquarters makes bad decisions. Here are five instances in which “The Good Idea Fairy” paid the U.S. military a visit with some terrible, terrible gear ideas.

No repeating rifles: At the battle of Gettysburg, Union Army Brig. Gen. John Buford’s cavalry proved that Union soldiers firing prone with carbines could cut down numerically superior enemy forces. But Maj. Gen. James Ripley, the head of the U.S. Army Ordnance Department at the time, delayed the Union army’s adoption of repeating rifles because he felt soldiers could not be trusted with repeating rifles, according retired Army Maj. Gen. Robert Scales, author of “Scales on War.”

Ripley was forced to retire in September 1863 after he refused President Lincoln’s order to buy Sharps rifles and carbines for the whole army, Scales said.

“Ripley thought soldiers were unsophisticated,” Scales told Task & Purpose. “So he thought if we gave the infantry a repeater they would simply shoot all their bullets and go home. Also he thought that infantry couldn’t deal with the complexity of a repeater. Finally, because he was an ordnance officer who spent his time teaching at West Point, he really didn’t understand the battlefield.”

Before The M16, there was the Krag: During the Spanish-American war, U.S. troops were issued the infamous Krag-Jorgensen rifle, which was difficult to reload, had a barrel that often failed, and had other problems that made it inferior to the German-made Mausers used by the Spanish.

“Teddy Roosevelt was so angry with the Army’s love affair with the Krag during the Spanish War that he personally ordered a new rifle when he became president,” Scales told Task & Purpose. The Springfield Armory eventually cannibalized much of the Mauser’s design for its Model 1903 rifle.

Crappy camouflage: There have been no shortage of uniform disasters since the turn of the century, but two of the most prominent has been the Army Combat Uniform, which was the service’s attempt to field a single camouflage pattern that would work both in the desert as well as forests and jungles.

First fielded in February 2005, the gravel grey pattern, “proved to provide ineffective concealment for operations in Afghanistan,” the Government Accountability Office determined in 2012.

“The Army used a decision process for the development of a new uniform that did not produce a successful outcome, and it had to replace that uniform in 2010,” the report found. “While the Army conducted some testing on camouflage patterns, it did not complete the testing before selecting a pattern.”

Mefloquine: Once widely used by the U.S. military to prevent malaria, mefloquine is now only prescribed to troops who cannot tolerate other drugs because the Food and Drug Administration issued a 2013 warning that the drug can cause permanent psychiatric and neurological damage, including paranoia, depression, and audio and visual hallucinations. Attorneys for former Staff Sgt. Robert Bales, who was convicted in 2013 of killing 16 Afghan men, women, and children, have argued that Bales was suffering from the psychiatric side effects of mefloquine at the time of the massacre.

In 2003, military doctors wrote nearly 50,000 prescriptions for mefloquine, but that fell to 216 prescriptions in 2015, Military Times reported. The Army also determined in 2015 that symptoms of “mefloquine intoxication” closely mimic Post Traumatic Stress Disorder. Veterans can file for disability compensation for health problems that they believe have been caused by mefloquine, according to the Department of Veterans Affairs, which decides such claims on a case-by-case basis.

Humvees, also known as the Rumsfeld-mobiles: The Humvee epitomized everything that was wrong with the U.S. military when it crossed the berm into Iraq in 2003. It was too light and highly vulnerable, and U.S. troops initially welded scrap metal to the vehicles – dubbed “Hillbilly Armor” – to give them a little more protection.

When Defense Secretary Donald Rumsfeld was embarrassed by soldiers’ questions about the ad hoc protections in December 2004 —awkwardly responding with, “You go to war with the Army you have, not the Army you might want, or wish to have, at a later time,” — the Pentagon up-armored thousands of the vehicles. But even the extra armor could not protect U.S. troops from the Humvees’ Achilles heel: It’s vulnerability to explosions from underneath, which the Pentagon had known about since 1994 when the Defense Department inspector general’s office called the vehicle a “deathtrap.”

Although Mine Resistant Ambush-Protected (MRAP) vehicles were available at the outbreak of the Iraq war, it was not until Defense Secretary Robert Gates mobilized industry in 2007 to mass produce MRAPs that the Humvee began to be used mostly inside the wire.