‘I Serve Afghanistan!’: Afghan Soldiers Graduate To The Elite Ranks Of Special Forces

Editor’s note: This is a dispatch by T&P; correspondent Marty Skovlund Jr. who is reporting on the ground from Afghanistan.... 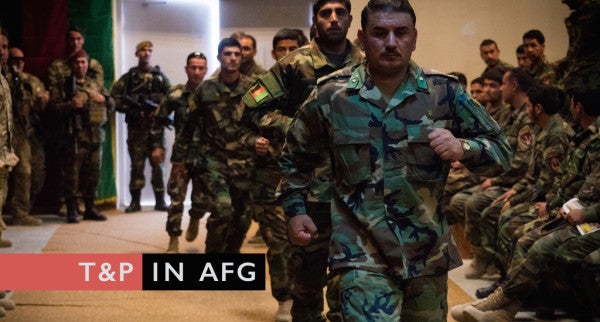 Editor’s note: This is a dispatch by T&P; correspondent Marty Skovlund Jr. who is reporting on the ground from Afghanistan.

As we descended into Camp Julien, the mountains towered above us, the city sprawled below us, and the bombed-out, yet still beautiful Darul Aman Palace sat perched on a hill level with us. We were heading to the graduation of Class 19 from the Afghan Special Forces Qualification Course, and the view of Kabul from the Black Hawk helicopter was one of the best I had seen so far.

After a brief brownout, we disembarked the aircraft and were escorted into a camp much more spartan than almost any other I had been to in this country. It was once home to a significantly larger population of about 4,000 multinational soldiers in the earlier years of the war, but has since shut down and re-opened multiple times in response to varying troop levels. Now it’s home to a modest U.S. Special Forces element tasked with assisting the Afghans in running special operations training. The chow hall was a small tent with just a few tables, and the metal gates creaked at the slightest movement. The once-bustling camp now sat eerily quiet.

An Afghan special forces soldier receives his certificate of graduation for completing the Special Forces Qualification Course. Upon receipt, he about-faces toward his peers and shouts, “I serve Afghanistan!”, Nov 8. 2017.T&P; photo by Marty Skovlund Jr.

After a short stop for coffee inside the chow tent, we headed over with a bevy of high-ranking U.S. service members who flew in for the graduation. Every class of Afghan special operators that graduates the qualification course is a sign of hope for the U.S. operation in the fight against violent extremists — and this occasion was no exception.

We walked into the graduation ceremony and were greeted by the sight of over 114 soon-to-be Afghan special forces soldiers. They looked the part too; these men were hard and held themselves with the confidence that you would expect of soldiers of their caliber. It's required that these soldiers serve a minimum of three years in one of the elite commando units before they can even apply for special forces. During the ceremony, some of the soldiers were called to the front of the room to receive their completion certificates. They each faced their fellow graduates and shouted, “I serve Afghanistan,” proudly displaying the flimsy piece of paper to the room. I was told it was the soldiers’ idea to say this — not a standard part of the ceremony. They wanted to be seen as warriors for their country. Those sitting cheered enthusiastically; this was an exciting moment for everyone.

An Afghan special forces soldier sits with his son at a graduation ceremony, Nov. 8, 2017.T&P; photo by Marty Skovlund Jr.

One of the brand new Afghan special forces soldiers was sitting next to his young son, who was dressed in a mini-military uniform. A few soldiers gushed over the heartwarming duo as the father gave the boy his tan beret to wear. I watched the boy don the beret, carefully adjusting it as if he had gone through the rigorous training required to earn it himself. His dad swelled with pride, and a lump formed in my throat. It reminded me of when I would dig out my own dad's military uniforms to wear as a kid.