Afghanistan, 17 Years Later: This Is What Winning Looks Like

The distance between Resolute Support headquarters and the Afghan presidential palace in Kabul can’t be more than 50 feet, yet... 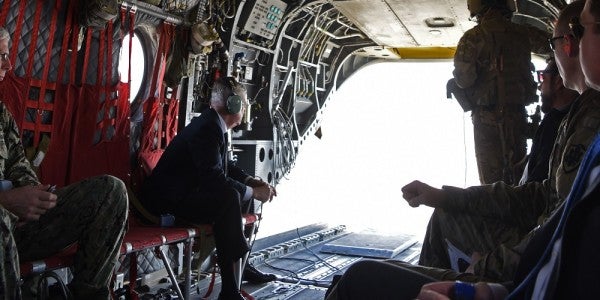 The distance between Resolute Support headquarters and the Afghan presidential palace in Kabul can’t be more than 50 feet, yet it is too dangerous to walk across the street from one to the other.

Your friendly Pentagon correspondent and other journalists traveled that short distance by vehicle to wait for Defense Secretary Mattis to meet Afghan President Ashraf Ghani during Mattis’ recent stop in Kabul, part of a week-long trip ‘round the word with the defense secretary that saw stops on San Diego, New Delhi, and Abu Dhabi.

Task & Purpose is not allowed to describe any of the security procedures involved in moving to and from the presidential palace, but rest assured that it felt just like going outside the wire — even if only briefly. And if you wanted a metaphor for how much progress the United States has made in Afghanistan after 17 years, look no further.

As yet another anniversary of the September 11th attacks comes and goes, the war in Afghanistan began nearly a generation ago and shows no sign of ending any time soon. Mattis told reporters on Monday that he senses a widespread yearning for peace when he met Afghan leaders, noting that 2019 marks 40 years since the Soviets invaded Afghanistan. The country has not known peace since.

Unfortunately, history does not bear out his hypothesis. Colombia’s civil war dragged on for 50 years; in Europe, the Hundred Years War lasted for 116 years. And the Afghans know how to hold grudges. “I waited 100 years before taking my revenge – and then, when I did, I cursed myself for my impatience,” an Afghan proverb says.

The U.S. government is pinning its hopes on the Taliban and Afghan government reaching a peaceful accommodation, Mattis told reporters on Sept. 4 while flying to India.

“The fourth ‘R’ in our ‘4R’ strategy is ‘reconciliation,’” Mattis said. “We are still believers that there is a way forward for the Taliban to reconcile in an Afghan-led, Afghan-owned reconciliation process. We do expect that we and the international community will support the Afghan government in this in all ways.”

As it turns out, your middle-aged Pentagon correspondent was on the same plane 10 years ago with then-Defense Secretary Robert Gates, who said the U.S. military would try to peel off “reconcilable” elements of the Taliban, just as it had worked with Sunni tribes against al Qaeda in Iraq.

“What we have seen in Iraq applies in Afghanistan,” Gates said on Oct. 6, 2008. “What is important is detaching those members of the opposition who are reconcilable and willing to be part of the future of the country from those who are irreconcilable and have to be dealt with militarily.”

To be fair, the idea did not originate with Gates either. Afghanistan’s last communist ruler Najibullah began an aggressive campaign of reconciliation with the Mujahideen even before the Soviets left in 1989. When the Taliban captured Kabul in 1996, Najibullah was violently murdered and his castrated body was dragged through the streets.

Despite the apparent lack of progress, retired ambassador Ryan Crocker told Task & Purpose it is still in U.S. national security interests to prevent the Taliban from allowing al Qaeda to use Afghanistan as a base to plan terrorist attacks.

Related: Never Forget The Day After 9/11»

The Taliban gave up Afghanistan rather than cut ties with al Qaeda when the United States invaded in 2001, and the two groups have remained close since, said Crocker, who served as ambassador to Afghanistan from 2011 to 2012.

Crocker is concerned with the media reports that the U.S. government could negotiate directly with the Taliban because doing so would undermine the Afghan government, he said.

“We’re going to be talking about Afghanistan and the Afghan government is not going to be in the room,” he said. “It’s not just that we’ve seen this in Vietnam, the way we negotiated surrender, but we saw it in the run up to World War II.”

So U.S. troops will likely be committed to Afghanistan for the foreseeable future. But given that an American citizen born on September 11th, 2001, is now old enough to fight in the war that day spawned, it’s possible that the last service member to return home from Afghanistan hasn’t even been born yet.