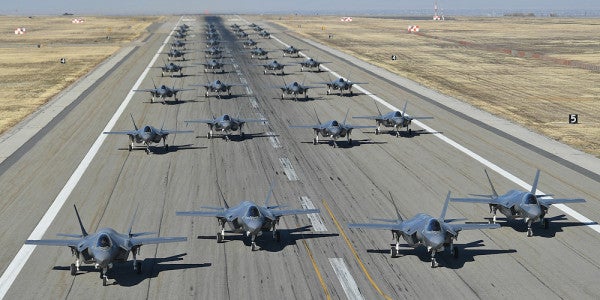 The Air Force lauded the display as evidence of America's overwhelming military might. At least one critic dismissed it as a publicity stunt.

In fact, there's one region where mass-takeoffs are an important military procedure: the Korean Peninsula. Ironically, that's the one region where the Trump administration is deliberately limiting the flying branch's authority to organize large-scale warplane-launches.

The November group-takeoff, which the Air Force calls an “elephant walk,” involved F-35As from the 388th and 419th Fighter Wings at Hill Air Force Base. The active-duty 388th and reserve 419th train Air Force F-35 pilots.

The 388th's 34th Fighter Squadron, whose F-35s have the latest Block 3F software, also has a front-line role. In late 2017, it became the first Air Force F-35 unit to deploy overseas, to Japan.

At the time of the elephant walk—the first for the F-35—the Utah wings possessed around forty F-35s. The wings are on track to receive a combined seventy-two F-35s by 2019.

The Hill stealth fighters took off one at a time in roughly 30-second intervals. In just a few minutes, the wings launched as many F-35 sorties as they normally do in a full day of routine training.

Pilots from the 388th and 419th Fighter Wings taxi F-35As on the runway in preparation for a combat power exercise Nov. 19, 2018, at Hill Air Force Base, UtahU.S. Air Force/Cynthia Griggs

“Exercising with multiple squadrons of F-35s can demonstrate our ability to defeat potential adversaries wherever they may arise,” Maj. Caleb Guthmann, the 34th Fighter Squadron's assistant director of operations, said in a statement .

But Valerie Insinna, a reporter for Defense News, echoed a more cynical sentiment when, on Twitter, she described the elephant walk as “cool” but “very choreographed.”

“Call me when they fix all the ALIS problems and then we'll talk,” Insinna added, referring to the F-35's buggy Autonomic Logistics Information System, a computer network for the type's maintainers.

What a time to be alive fam.

A time where an elephant walk is considered a "massive flex" of power.

I mean, it's cool. It's a useful exercise. But, its also very choreographed.

Call me when they fix all the ALIS problems and then we'll talk.

In a March 2018 congressional hearing, Lt. Gen. Jerry Harris, the Air Force's deputy chief of staff for plans, programs and requirements, said it cost around $50,000 to fly one F-35 for an hour. That's roughly twice what an F-16 costs for an hour in the air.

In fact, elephant walks significantly contribute to the readiness of American and allied squadrons in South Korea and nearby countries.

In the event of war with North Korea, U.S. and allied forces plan to quickly target the roughly 13,000 artillery pieces that Pyongyang has massed along the Korean demilitarized zone. In the early hours of a war, that artillery likely would bombard Seoul, which lies just 25 miles south of the DMZ.

The Air Force maintains three F-16 squadrons and an A-10 squadron in South Korea and two F-15 squadrons in Japan. Additional squadrons, almost certainly including F-35 units, would join them during a crisis. An air campaign targeting North Korea would require 2,000 sorties per day, U.S. military officials toldAir Force magazine.

By comparison, the allied air war over Iraq and Kuwait in January 1991 averaged 1,200 strike sorties per day, according to statistics compiled by David Deptula, a former Air Force general who is now an analyst for the Mitchell Institute for Aerospace Studies in Virginia. The U.S.-led campaign against Islamic State in Iraq and Syria averaged just fifteen strikes per day, according to Deptula.

The roughly 100 U.S. F-16s and A-10s in South Korea and Japan—and any F-35s that deployed in time for the first day of fighting—likely would be the first to hit North Korean artillery. And they'd have to launch fast to save lives in Seoul.

Pilots from the 388th and 419th Fighter Wings taxi F-35As on the runway in preparation for a combat power exercise Nov. 19, 2018, at Hill Air Force Base, UtahU.S. Air Force/Senior Airman Justin Fuchs

There is a reason that the 7th Air Force in South Korea and Japan has organized more elephant walks than most Air Force commands have done. “The threat here on the peninsula is very real, and countering that threat needs to be in the forefront of our minds,” Col. William D. Betts, then-commander of the 51st Fighter Wing in South Korea, said in 2017.

But the Korea elephant walk is an endangered species. The 7th Air Force has conducted most of its mass-takeoffs, which require intensive planning and maintenance efforts, under the auspices of the annual Vigilante Ace exercise.

In 2018 the Trump administration suspended Vigilant Ace as a concession to North Korea, hoping that Pyongyang in turn would suspend its nuclear-weapons program. North Korea has continued to develop its nukes.

The Air Force organized elephant walks in South Korea in 2016 and 2017 but not in 2018. The suspension of large-scale exercises with South Korea hasn’t created “immediate” concerns about combat-readiness, Pacific Air Forces commander Gen. Charles Brown said in November 2018. But it could cause “difficulties” if it continues.

There's nothing preventing Air Force squadrons that aren't in South Korea, including Hill's F-35 units, from practicing mass takeoffs. These same squadrons might deploy to the Korean Peninsula during wartime, in which case their elephant walks would amount to more than an expensive public relations exercise.

They'd be prepared for the kind of sudden, overwhelming violence a new Korean war would require .

David Axe edits War Is Boring. He is the author of the new graphic novels MACHETE SQUAD and THE STAN.