Comrades! From deep inside the Pentagon bureau of Task & Purpose’s news collective, I bring you the story of Army 2nd... 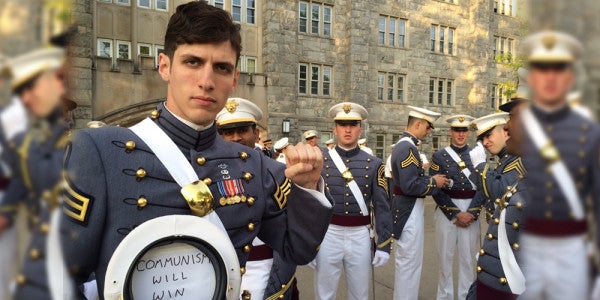 Comrades! From deep inside the Pentagon bureau of Task & Purpose’s news collective, I bring you the story of Army 2nd Lt. Spenser Rapone, a soldier more openly socialist than Vladimir Ilyich Ulyanov, who found out that the proletariat does not always triumph.

Rapone first gained national attention last September, when a picture of him at West Point with a sign that reads “Communism Will Win” tucked into his cap went viral. Soon afterward, Rapone posted a second picture of him wearing a Che Guevara t-shirt underneath his uniform. (Che became Fidel Castro’s chief executioner after Cuba’s 1959 revolution. When he was killed eight years later in Bolivia, his hands were cut off and preserved in formaldehyde to prove he was dead.)

West Point quickly announced that Rapone’s chain of command was “aware of his actions and is looking into the matter,” and the Academy subsequently took fire for not disciplining the soldier, even though he’d already graduated and was assigned to Ft. Drum when the pictures surfaced.

Recently, the Army announced that Rapone was disciplined, but the service did not say how.

“Due to privacy act restrictions, we are limited in what information we can provide,” Army spokeswoman Lt. Col. Nina Hill told reporters in a June 12 email. “We can confirm, however, that the Army conducted a full investigation, and that appropriate action was taken. We now consider the matter closed.”

On June 18, Che Rapone tweeted a picture of himself giving the middle finger to Fort Drum with the message: “One final salute #FTA.” Since “FTA” probably does not stand for “Freight Transport Association,” it seems likely that Rapone has been recalled to the motherland for reeducation. The Army would not say if Rapone is still a soldier.

Citing the “privacy act restrictions,” Hill said she was unable to tell T&P; what exactly the investigation looked into, what type of action was taken against Rapone, and what his current rank is. T&P; has been unable to confirm unsourced media reports that claim Rapone has received an other than honorable discharge.

Attempts to reach Rapone were failures – much like the Great Leap Forward, the Cultural Revolution, and Air America radio. T&P; tried tweeting to Rapone — whose twitter handle is @punkproletarian – but the Marxist devotee did not respond.

Many of you are no doubt surprised to learn that a reporter was unable to get in touch with a communist. Sure, this reporter may or may not occasionally crank up the Red Army Choir while on deadline, but the days of reporters being active commie stooges ended when Walter Duranty stopped writing for the New York Times.

It is unclear if Sen. Marco Rubio’s Oct. 3, 2017, letter to the acting Army secretarydemanding that Rapone’s commission be revoked had any bearing on whatever action the Army ultimately took.

“Posts on social media by Rapone broadcast his devotion to the communist cause and his plans to infiltrate and sabotage the military,” the Florida Republican wrote in the letter, which was obtained by Army Times.

A spokeswoman for Rubio did not respond to T&P;’s request for comment by deadline. The Red Army had better luck in Afghanistan than this reporter did finding people to actually talk for this story.

Like Keri Russell and Matthew Rhys in “The Americans,” your friendly Pentagon correspondent will continue to try to ferret out the details on this issue. Until then, please enjoy this joke, which was popular in the Soviet Union during Stalin:

It’s the NKVD. You are under arrest. You are about to be sent to a gulag in Siberia.