It's hard to imagine two organizations more different than Amazon and the U.S. Army. But Detroit now enjoys the dubious... 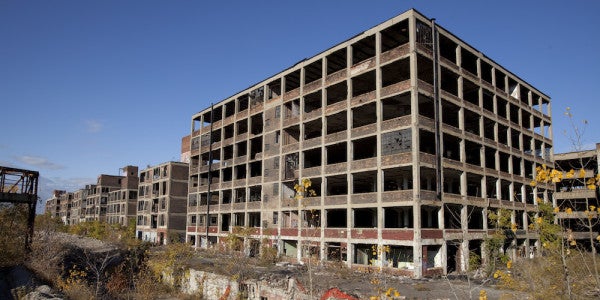 It's hard to imagine two organizations more different than Amazon and the U.S. Army. But Detroit now enjoys the dubious distinction of having been spurned by both those mega-employers, albeit for very different reasons.

Just months after Amazon rejected Detroit's bid to become the home of its second headquarters, the Army has decreed that the city is also unsuitable to be the headquarters for the Army Futures Command, a multibillion-dollar initiative tasked with modernizing the nation's oldest service branch.

But the latest snub has less to do with the shallowness of Detroit's talent pool than with its shortcomings as a place for the Army's best and brightest to live.

Now, barring the success of a long-shot appeal by Sen. Gary Peters, southeast Michigan is poised to sustain another blow to its self-esteem, and another setback in its quest for recognition as a leader in technological innovation.

The future of fighting

The nascent Futures Command is the keystone in what the Army describes as its most significant reorganization since the Vietnam War. The 500 military and civilian personnel initially assigned to the new command will lead efforts to integrate cutting-edge technology more quickly into the Army's combat efforts.

When the Army retained consulting giant McKinsey & Co. to evaluate 30 cities as possible venues for the new command's headquarters, Peters, who sits on the Senate Armed Services Committee that his predecessor Carl Levin once chaired, was confident Detroit would emerge as a top candidate.

Peters had been present in December when U.S. Defense Secretary James Mattis told an audience of military contractors that he considered Michigan one of four regions (along with Silicon Valley, Boston and Texas) spearheading the cutting-edge technology that would drive the Pentagon's modernization efforts.

Peters knows that two of the Army's most important procurement and research units, the Tank-automotive and Armaments Command (TACOM) and the Tank Automotive Research Development & Engineering Center (TARDEC), have long been headquartered in Warren.

“If you're building a futures command for a ground-force military organization, you'd think Detroit would be the obvious place,” he said in a phone interview this week.

But last month, when Undersecretary of the Army Ryan McCarthy sent Peters' committee a list of the 15 finalists from whom the Army proposed to solicit bids for the Future Command, Peters was startled to learn that Detroit had not made the cut.

At first blush, the contest for the Army's love is shaping up much like the richer and more celebrated competition for Amazon's second headquarters.

Like Amazon, the Army says it will put a premium on the quality and educational credentials of each region's workforce — a priority the online retailer cited as critical in its decision to eliminate Detroit as a candidate to host its second headquarters.

But by the Army's lights, at least, Detroit's talent pool was sufficiently wide and deep to support a vibrant Futures Command: The city's workforce ranked seventh among the 30 cities McKinsey evaluated. Detroit was also a top 10 finisher in two of the other three categories the selection team used to rank possible headquarters sites.

But in a fourth comparison that ranked contenders according to the quality of life each offered to the staff of the Futures Command, Detroit finished near the bottom.

“Detroit ranked so low on the livability scale,” Peters said the Army's briefers told him, “that it blew us out of contention.”

The livability scale that torpedoed Detroit's ambitions isn't some proprietary formula developed by McKinsey or the Pentagon. It's a well-established metric conceived by AARP (formerly known as the American Association of Retired Persons), whose Public Policy Institute touts the web-based Livability Index as a tool “people of all ages” can use to compare the quality of life in metropolitan areas across America.

The Liveability Index ranks cities according to seven criteria. In the most recent evaluation, Detroit ranked among the middle third of the nation's metropolitan areas in six categories, including housing access and affordability; neighborhood access to work and play; transportation options; air and water quality; civic and social engagement; and economic and educational opportunity.

In the seventh category, health, which encompasses everything from the prevalence of smoking and obesity to patient satisfaction with their hospital care, Detroit ranked in the bottom third — a data point Peters said should be sobering to state lawmakers hoping to restrict Medicaid eligibility for thousands of Michiganders who have gained access in the last four years.

“It's another reason why we have to assure that Medicaid services remain in place,” he said. “When a significant number of people don't have access to health care, it hurts the whole region's ability to attract employers.”

Detroit's overall livability score was 47 — just below the median for all the metropolitan areas AARP scrutinizes. But throwing nearby suburbs into the mix doesn't significantly alter the picture. When all of Wayne County is included, the liveability score doesn't budge, and Oakland County's 50th percentile ranking is still well below those of Futures Command finalists like San Francisco (66) and Seattle (63).

Peters says he was encouraged to see that Detroit outscored more than half of the cities selected as finalists for the Futures Command headquarters on the other three criteria McKinsey applied.

Detroit scored ninth in private sector innovation, finishing ahead of eight cities, including Austin, which advanced to the Army's final round. The Motor City had an even better seventh place showing in two other categories: talent, and strength of research and development resources for science, technology, engineering and math, popularly known as STEM studies.

Peters says Detroit's strong showing in those “technical categories” helped him persuade Army Secretary Mark Esper that Detroit should be invited to submit a bid packet to the task force in charge of selecting the Futures Command site, a privilege that had been restricted to the 15 finalists.

He says a team that includes the defense subsidiary of the Michigan Economic Development Corp. and the Detroit Regional Chamber of Commerce has begun preparing a pitch similar to the one the city made last year, albeit unsuccessfully, to Amazon. Peters adds that Detroit is likely to score especially well on another factor — cost — that will be added to the selection criteria used to cull finalists.

“If you look at the sort of people with whom the Army intends to staff the Futures Command,” Peters notes, “a young captain's salary is going to go a lot farther in Detroit than in San Francisco or Boston.”

The Army hopes to finish reviewing the finalists' packets next month and make a a final site decision soon after. And even if Secretary Esper and company persist in looking elsewhere, the Army's snub would be a lesser blow than Amazon's.

The online retailer's decision to eliminate Detroit as a potential site for its second headquarters came after a Who's Who of Michigan's political, corporate and philanthropic leaders collaborated in a full-court press for Amazon's favor. The city that ultimately prevails in that contest stands to reap as many as 50,000 jobs and billions of dollars in economic activity.

The Futures Command will have a much smaller footprint, employing hundreds instead of the tens of thousands that might be attached to, say, a new military base.

But that's no consolation to Peters, who says the Army's decision to site its Futures Command elsewhere would send an unfortunate signal to other high-tech employers shopping for their own expansion sites.

“To me, this is about the signal the Army's decision will send,” Peters says. “We want to be seen as the place the Army wants to be as it thinks about the future of technology and warfare.”

The Army seems to have figured out that private entrepreneurs are faster and more nimble than the Pentagon when it comes to developing and applying new technology, so it wants to make sure its Futures Command is located near the companies most likely to pioneer important breakthrough. The work being done at General Motors, Ford and Willow Run's American Center for Mobility can make a legitimate claim for the Army's attention.

What a tragedy if the region's failure to invest in its own social, environmental and medical well-being make the cost of proximity to Detroit's technological leadership too dear for even an organization as rich as the U.S. Army to bear.