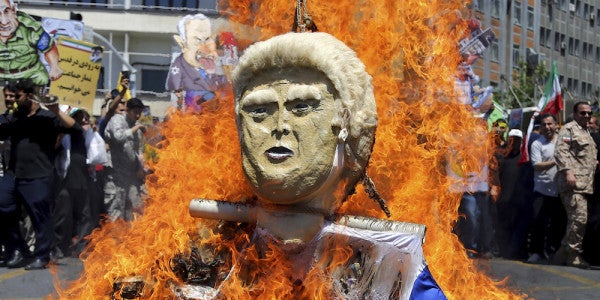 Iraq helped fight Islamic State and became a strategic U.S. partner in the Middle East. North Korea, of course, has just refreshed relations with the U.S., or at least with President Trump, after a high-profile handshake and vague talk of denuclearization.

That leaves Iran, the other member of the so-called axis of evil, a term then-President George W. Bush famously used in 2002 to describe inveterate adversaries of the United States.

The Singapore summit between Trump and North Korean dictator Kim Jong Un was short on substance and could amount to nothing, analysts say. Yet, in Tehran, Trump’s enthusiastic outreach to a rogue nation with a history of human rights and nonproliferation violations renewed accusations of U.S. hypocrisy.

Only weeks ago Trump withdrew from the landmark 2015 nuclear agreement between Iran and the U.S., Britain, China, France, Germany and Russia — despite assurances from international inspectors that the Islamic Republic was living up to its commitments — and began to reinstate harsh U.S. economic sanctions. Among the White House’s complaints were Tehran’s continued ballistic missile tests and support for Hezbollah and other anti-American militant groups.

As Trump remakes U.S. foreign policy — picking fights with traditional allies like Canada and Mexico while going softer on countries like Russia — many wonder about the future of ties with Iran. Its 80 million people have been fed a steady diet of anti-Americanism since the 1979 Islamic Revolution, but many Iranians blame the theocracy for pursuing reckless policies that have antagonized the United States and made life harder for ordinary people.

The U.S. withdrawal from the nuclear agreement and the sanctions have further bruised Iran’s already shaky economy.

Mostafa Bromandi, the 62-year-old owner of a printing house who’s laid off much of his staff over the past three years, said the threat of renewed sanctions had sent prices soaring and pushed his business toward collapse.

“There are two options for our country as the last of the ‘axis of evil’: either sit for serious and open talks with Trump and bury the hatchet or watch the implosion sooner or later,” Bromandi said.

“Perhaps I’m a wishful thinker, but I hope there are some secret talks between Iran and America somewhere or somehow. Otherwise we are doomed.”

In this Friday, June 8, 2018, photo, an effigy of the U.S. President Donald Trump is set on fire during the annual anti-Israeli Al-Quds, Jerusalem, Day rally in Tehran, Iran.Associated Press/Ebrahim Noroozi

Many in Tehran wrung their hands as they watched the North Korean flag share a stage with the Stars and Stripes, and read about Trump touting the so-called Hermit Kingdom’s tourism potential.

Fresh from his North Korean photo op, Trump told reporters that after the sanctions resume he would consider negotiating a “real deal” with Iran — “but right now it’s too soon to do that.”

Meanwhile, the Iranian currency’s slide against the dollar has led to soaring prices for consumer goods and diminishing value of government subsidies on which many Iranians depend to survive. Across Tehran, talk of economic mismanagement and widespread corruption is everywhere, in shared taxis and buses, on subways, in public parks and deserted shops.

“People in Iran are in their right mind to be talking about double standards,” said Alex Vatanka, an Iran expert at the Middle East Institute in Washington. “Why can North Korea pull out of the and test nuclear reactors, whereas Iran, which signed on to the toughest nuclear inspections regime, has the rug pulled out from underneath its feet?”

Vatanka said the fundamental question about Iran’s relationship with the United States is whether the hard-line clerical establishment that runs the Islamic Republic sincerely seeks a diplomatic rapprochement.

Related: The Pentagon Is Bracing For Possible Fallout From The Scrapped Iran Nuclear Deal »

Whereas President Hassan Rouhani, a relative moderate who campaigned on ending Iran’s diplomatic isolation, advocated for the agreement under which the Islamic Republic ceased its nuclear-related activities in exchange for relief from sanctions, Iranian conservatives sought to undermine the deal at every opportunity.

Those policies, more than Tehran’s adherence to the terms of the nuclear deal, were what drove the Trump administration to criticize Iran’s belligerent behavior and withdraw from the agreement.

“There is no doubt that the Trump administration has a much longer list of grievances,” Vatanka said. “Fundamentally what is at stake here was the notion that the nuclear agreement was going to be a platform to build on in terms of confidence-building between Iran and the U.S.

“It’s hard for people to see today because of Trump’s bombastic rhetoric. But he did give Iran over a year to change its behavior.”

Ali Sabzevari Fasanghari, a 38-year-old publisher of local magazines, agreed that Iran — unlike North Korea — had not presented a unified approach toward the U.S.

“President Rouhani makes the , and in Friday prayers he is openly criticized and accused of selling out the country,” said Fasanghari, sitting idle in an empty office in Tehran. “But in North Korea, one dictator decides. The North Korean regime is monolithic; ours is wishy-washy.”

Now North Korea also has more leverage against the U.S., he said. “They have a nuclear bomb. Iran could have had the capability to build one but it lost it after the nuclear deal,” Fasanghari said. “Iran has no important bargaining chips except its regional influence, which is shrinking, and Mr. Trump is taking advantage of this situation.”

Some analysts say the animosity has more to do with Iran’s regional adversaries — mainly U.S. allies Israel and Saudi Arabia — that want to foment economic and political crises in the Islamic Republic.

“This is one of the main differences between the U.S.-North Korea and U.S.-Iran conflicts: While America’s regional allies in the former conflict seek to avoid war and favor a diplomatic solution, U.S. allies in the Middle East oppose negotiations in the latter conflict,” Trita Parsi, president of the National Iranian American Council, wrote in a column this week.

Mahdi Beyk, an analyst and journalist close to Iranian reformists, said Trump was keeping his campaign promises to undo the policies of the Obama administration, including by leaving the nuclear deal and strengthening ties with Saudi Arabia. While North Korea grabbed the diplomatic opportunity presented by a new U.S. administration, Iran’s Rouhani has suffered a blow, Beyk said.

“North Korea seized the moment to try to get out of its dire economic situation,” he said. “But I think if North Korea can, why not Iran? The youth in Iran are longing for ending the enmity between Iran and America.”