The term 'no liberty' means more than just cancelled shore leave in this case. 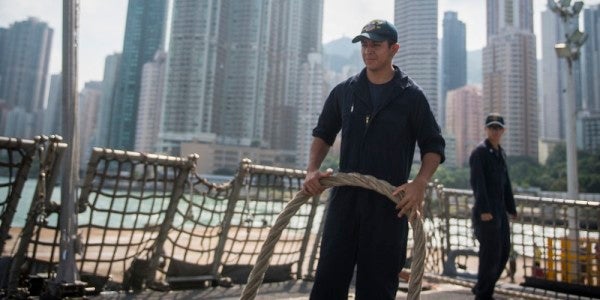 “The U.S. Navy has a long track record of successful port visits to Hong Kong, and we expect them to continue,” Christensen told Task & Purpose on Wednesday.

Christensen referred questions about why the Green Bay and Lake Erie sailors would not be able to spend their liberty in Hong Kong to the Chinese government.

China has been ruled by the communist party since 1949. Thirty years later, the Chinese began adopting capitalism, but so far the powers that be have refused to consider political reforms in part because they blame Mikhail Gorbachev's efforts to democratize the Soviet Union for its collapse in 1991.

As of Wednesday, the communist bureaucrats whose hands are firmly clasped around democracy's throat seemed indifferent to the fact that sailors will not be spending their liberty in Hong Kong.

The last Navy ship to visit Hong Kong was the 7th Fleet flagship USS Blue Ridge in April, a defense official said. The last time the Chinese denied a port visit to Hong Kong was in September 2018, when the amphibious assault ship USS Wasp was not allowed to dock there.