More than 300 vessels have been fishing off the Galapagos for the last month. 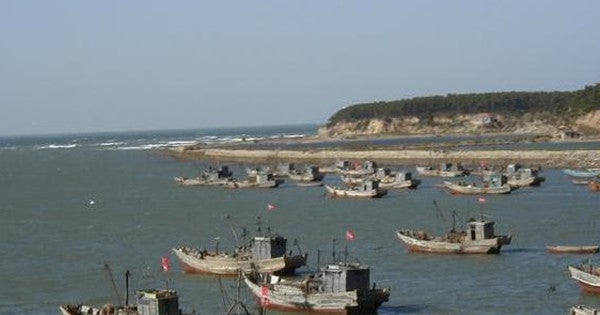 Hundreds of Chinese boats fishing near the Galapagos Islands have raised concerns about environmental damage, but their activity reflects a growing competition for resources some worry could escalate into armed conflict.

Ecuador's navy in late July identified about 260 vessels, many of them Chinese-flagged, just outside the Galapagos Islands marine reserve. Chinese fleets have fished in the area during the summers since 2017, but the size this year — now over 300 vessels — appears unprecedented.

In late 2017, the crew of a Chinese ship was jailed in Ecuador after being caught in the reserve with 300 tons of fish, including endangered sharks. Ecuador is monitoring the fleet to avoid another such incident, but experts say the fleet has already dumped plastic waste and threatens wildlife moving in and out of protected waters.

Biologists are also worried about overfishing. A former Ecuadorian environment minister said the vessels' aggressive fishing was “a big threat to the balance of species.”

The fleet's targeting of an ecologically sensitive area comes as the region's governments remain focused on the coronavirus, said James Bosworth, founder of the political-risk firm Hxagon.

Ecuador is monitoring the boats and sharing information with its neighbors, but “actual options for stopping these ships are limited,” Bosworth said.

Ecuador said China agreed to allow supervision of the fleet. It's not clear what that entails, but it will be difficult given the vast area in which the boats are fishing.

“It's hard to prove any individual ship is doing anything illegal in international waters. No country wants to be the one to get on China's bad side by targeting illegal fishing,” Bosworth said.

Secretary of State Mike Pompeo has expressed US support for Ecuador and said it was “time for China to stop its unsustainable fishing practices, rule-breaking, and willful environmental degradation.”

Days later, China's Foreign Ministry said the U.S. was “making irresponsible remarks” and should “focus more on its own affairs.”

The ships illustrate the reach of China's distant-water fishing fleet, the largest and most prolific in the world.

Its boats have been used to assert Chinese claims in the South China Sea. As fisheries near China were depleted, they ventured farther overseas, leading to more disputes.

Indonesia has described Chinese fishing activity as “transnational organized crime” and has blown up at least one fishing boat from China. African countries have detained Chinese ships suspected of illegal fishing.

Latin American countries are increasingly vigilant — Argentina regularly protests illegal Chinese fishing and has fired on and sunk Chinese boats. US Southern Command, which oversees U.S. military activity in the region, said in 2018 that China's “insatiable appetite for fish” was an acute threat to Latin American waters.

Chinese fishing boats, including some off Ecuador's coast, have also attempted to conceal their locations while fishing.

Many boats near Ecuador are Chinese-flagged or owned by Chinese companies — some of which are suspected of illegal, unreported, and unregulated fishing.

Beijing heavily subsidizes its distant-water fishing fleets, the expanding presence of which is linked to Beijing's growing economic interests abroad in relation to the Belt and Road Initiative, according to the Stimson Center.

“I don't know that there is any direct connection to the Chinese government or law-enforcement protection” for those vessels, “but of course there's always the issue of state subsidies, which make these distant-water operations possible,” said Greg Poling, director of the Asia Maritime Transparency Initiative at the Center for Strategic and International Studies.

Illegal fishing is a serious concern, but officials say the competition for resources driving it could spark violent conflict.

In a 2017 interview, retired U.S. Navy Adm. James Stavridis said Chinese state-subsidized distant-water fishing fleets, sometimes operating with coast guard protection, are a form of “hybrid warfare” and that “nations are willing to push … international law” to access “huge pots of resources” in the oceans.

U.S. Coast Guard Capt. Jay Caputo warned in a 2017 article that political battles may be replaced by fights over resources, particularly fish. A year later, US Coast Guard Cmdr. Kate Higgins-Bloom wrote that “the odds that a squabble over fishing rights could turn into a major armed conflict are rising.”

The Arctic is an emerging venue for this competition, with “growing international interest in resources [and] in sources of protein,” Vice Adm. Steven Poulin, commander of the Coast Guard's Atlantic Area, said this month. (Several countries, including China, have agreed to prohibit unregulated commercial fishing in the Arctic for 16 years.)

Many ocean resources are outside of national jurisdictions, meaning international efforts are needed to manage their use.

“It would be good to see South America come up with a unified response to pressure China to restrict fishing operations,” Bosworth said. “More military cooperation in Latin America to patrol coastal waters could also help.”

For now, there isn't much those countries can do beyond monitoring and reporting, Bosworth added. “But these Chinese ships are probably returning in the coming years, and the region should have no excuse for being unprepared when they do.”