President Donald Trump has regularly called on China to stop North Korea’s nuclear advancement, even saying in July that it... 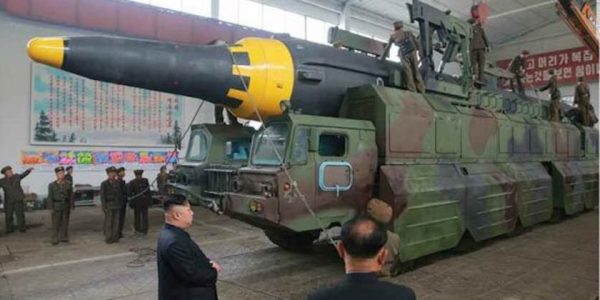 President Donald Trump has regularly called on China to stop North Korea’s nuclear advancement, even saying in July that it could “easily” end the crisis. In Beijing, however, leaders think the opposite.

While the U.S. and China agree that the Korean peninsula should be rid of nuclear weapons, they differ on how best to achieve that. The sense of urgency is heightened in Washington, as the U.S. suddenly is potentially in range of Kim Jong Un’s nuclear weapons, while China and North Korea’s other neighbors have lived with the threat for years.

China, however, sees no need to trigger a potential catastrophe on its border over what it regards as fundamentally a dispute between the U.S. and North Korea. Beijing has warned that rhetoric from both sides — the U.S. has threatened military action against North Korea — is making things worse.

In China’s eyes, Kim won’t give up his nuclear arsenal even if Beijing shuts off its oil supply, despite the economic pain that could cause. That’s because his weapons program gives him a deterrent against the U.S., which North Korea frequently says wants to attack.

China’s logic extends to the current debate at the United Nations Security Council on the U.S. proposal to cut off North Korea’s oil supply after it conducted its sixth and most powerful nuclear test.

China has repeatedly said it will support further U.N. action if it helps restart talks with North Korea. Unlike Trump, Beijing’s leaders fundamentally oppose a war to resolve the situation.

“China has reiterated many times that military force cannot be an option for the settlement of the Korean Peninsula nuclear issue,” Foreign Ministry spokesman Geng Shuang said the day after North Korea detonated what it called a hydrogen bomb. A “peaceful solution will be the only correct way.”

North Korea’s state-run Korean Central News Agency accused the U.S. of having carried out tests of nuclear bombs and missiles while decrying similar actions by Pyongyang. “It is the gangster-like logic that cannot convince anyone,” the agency said in a Saturday commentary. “Its talking about war and threat of harsh sanctions will enhance only the Korean people’s revolutionary consciousness and add justification to (South Korea’s) access to nukes.”

China has backed North Korea since the Korean War, in part to have a buffer state that keeps U.S. military forces from its border. While Mao Zedong once described ties as being as “close as lips and teeth,” the relationship has become strained since Kim and Xi Jinping came to power, and some China observers say Trump is overstating Xi’s ability to influence what the regime does.

Kim’s antics have also started to affect China’s strategic interests. A proliferation of missile defense systems by the U.S. and its allies could diminish China’s own military capabilities. There are environmental risks if radiation spills across its northeastern border. And Kim might do something that triggers a war.

China has sought to play a mediating role, backing progressively tougher sanctions like a ban on coal exports while proposing that both sides freeze hostilities and return to talks. Those actions, regularly dismissed as insufficient by Trump’s administration, have led to public disagreements with Pyongyang. North Korea’s state media said in February that China was “dancing to the tune of the U.S.”

Photo taken in October 2015 shows North Korea's intermediate-range Musudan ballistic missiles displayed during a military parade. It was reported on May 31, 2016, that Pyongyang fired a missile, possibly a Musudan, but the launch appears to have failed.AP photo

Since coming to power in late 2011, Kim has detonated four nuclear devices, test-fired about 90 missiles including two intercontinental ballistic missiles, executed his uncle and murdered his brother, both of whom were seen as close to China.

One common view in Beijing is that Trump’s war rhetoric has only made Kim more insecure, prompting him to accelerate his weapons program.