US civil-military relations: a flawed deal in desperate need of repair

Civil-military relations in the United States are in a serious state of disrepair, driven in profound measure by presidential politicization of the military and the military’s attendant willingness to let itself be politicized 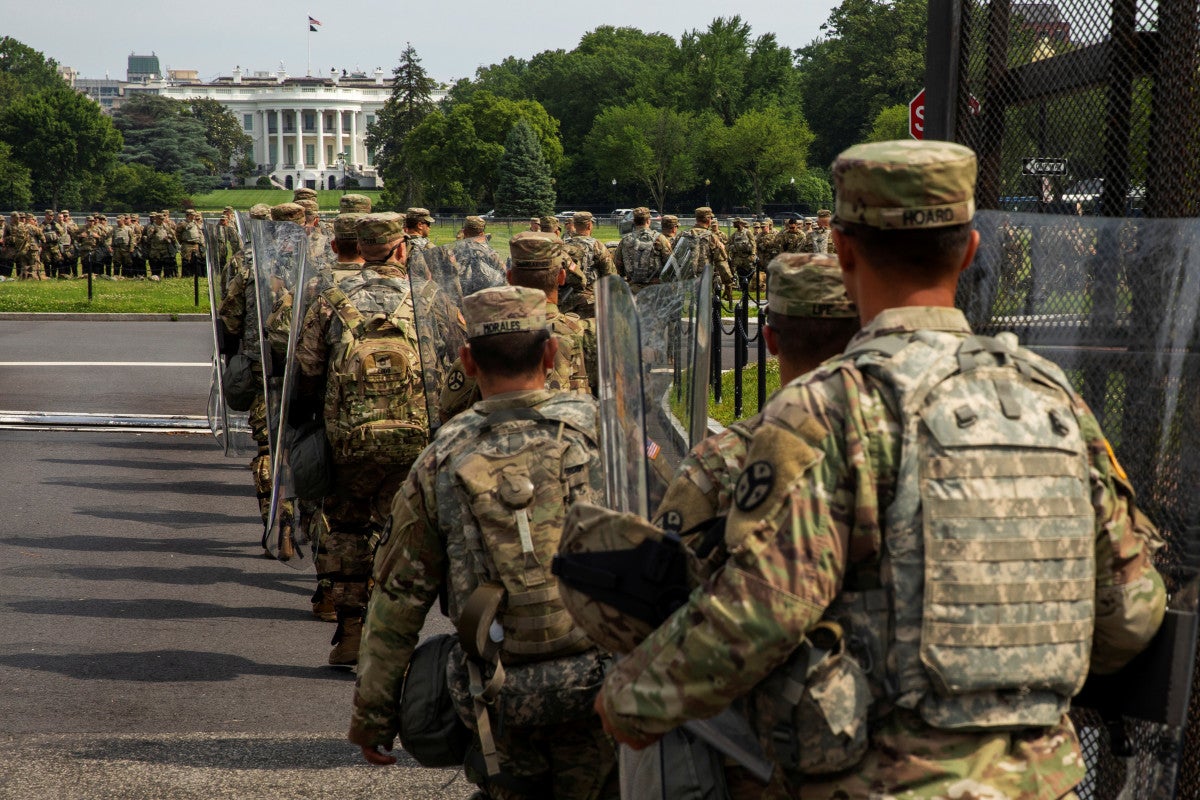 Civil-military relations in the United States are in a serious state of disrepair, driven in profound measure by presidential politicization of the military and the military’s attendant willingness to let itself be politicized. The Trump presidency, now almost four years on, has undermined and crippled what have traditionally been two of the most canonical features of democratic governance: civilian control of the military and political neutrality by the military. It is way past time we — concerned citizens and self-proclaimed experts alike — woke up and redressed this debilitating state of affairs by fundamentally rethinking our approach to civil-military relations.

The measure of civil-military wellness isn’t simply the absence of a coup d’etat, mass disobedience, or organizational disintegration, nor the presence of blind, unquestioning obedience to orders expressed or implied. In a 1787 letter to his friend and philosophical confrere James Madison, Thomas Jefferson famously observed: “I hold it that a little rebellion now and then is a good thing, and as necessary in the political world as storms in the physical.” In the realm of contemporary U.S. civil-military relations in the age of Trump, we may come to conclude that, circumstances demanding, a little disobedience now and then is a good and necessary thing.

Let us note at the very outset how awash in irony we are at the moment. It is ironic that former Secretary of Defense James Mattis – who never effectively transitioned from uniformed general to pinstriped civilian and stepped up to his responsibility to protect the military institution he was charged with shepherding from politicization by his commander in chief – only now grabs the public spotlight by finally registering his objection to blatant politicization by President Donald Trump.

It is ironic that the current Secretary of Defense, Mark Esper, a West Point graduate sworn to support, defend, and bear true faith and allegiance to the Constitution, to include upholding the right of the people to assemble peaceably, would shamelessly parrot the political rhetoric of his commander in chief and call for militarily “dominating the battlespace” of citizen demonstrations that were entirely justified and authorized.

It is ironic that in extolling the virtue of an apolitical military, we invariably place the onus for political neutrality on the military while ignoring political transgressors – especially commanders in chief – who consciously and intentionally do the politicizing. In turn, it is ironic that the politicization of the military so totally consumes our attention at the expense of the concomitant militarization of politics.

And it is especially ironic, therefore, that the United States would so unceasingly, hypocritically enjoin other nations, through both military and diplomatic channels, to emulate our approach to civil-military relations when the idealized model we profess to represent is so seriously flawed in practice.

In the realm of contemporary U.S. civil-military relations in the age of Trump, we may come to conclude that, circumstances demanding, a little disobedience now and then is a good and necessary thing.

Civil-military relations in this country are predicated on a tacit, but binding social contract of mutual rights, obligations, and expectations that tie the parties to the relationship — the military, its executive and congressional civilian overseers, and society at large — to one another. For its part, the military is expected to be operationally competent, a source of sound advice, socially responsible, and politically neutral. Ignoring for the moment the questions of whether the military today is operationally competent (arguably not), a reliable source of sound advice (arguably not), and socially responsible (arguably not), political neutrality is really where the rubber meets the road.

Political neutrality and civilian control are inextricably linked, conceptually and practically. Neither is specified or defined in law, though civilian control has long been cited as constitutionally derived by virtue of the President’s designation in Article II as commander-in-chief. In practice, the military is controlled to the extent that it lets itself be controlled. Its controllability is generally measured by whether those in uniform speak out publicly in opposition to — though not, of course, in support of — an administration’s policy. Where there is obedient silence, political neutrality, and with it civilian control, is assumed to exist, and civil-military relations are commonly judged to be sound.

But political neutrality isn’t unconditional, although there are those who would argue that the military is duty-bound to do whatever it is told, or expected, to do; no questions asked, no excuses, regardless of the nature of the direction or the motives behind it. That may or may not seem sound in the abstract, but in practice there is a silent quid pro quo “deal” governing what the military actually does and looks for.

In return for the deference, obedience, compliance, and silence expected of the military, those in uniform in turn expect — and have a right to expect — three things from their civilian political overlords: strategic literacy, strategic competence, and strategic leadership. If the military is to stay in its military lane, it has every right to expect that inherently political politicians think, speak, and act in more elevated terms as the price of doing business. Where they don’t, the deal is broken.

How should the military be expected to comport itself when judged in relation to how well our government performs, how ably our national “leaders” lead, and how ethically those in public office act? Our federal system of government is one we persist in thinking of as the “greatest democracy in the world,” a “shining city on a hill.” Our inheritance and enduring preference has always been for representative democracy over both autocracy and direct democracy, the underlying premise (flawed though it may be) being that the best of us govern the rest of us. Our arrogant but sincere sense of American exceptionalism is born of such ideals as popular sovereignty, the rule of law, the separation of powers and checks and balances, public accountability and popular consent, and a vast repertoire of civil liberties.

The regrettable reality, though, has repeatedly been dramatically different, marred by political and ideological polarization; inertia and entropy (e.g., no declarations of war to justify endless war; no on-time budgets; the expediency of executive orders over laws and executive agreements over treaties); executive-legislative collusion without bona fide cooperation; party loyalty and ideology over the fulfillment of institutional responsibilities (a supine, inept Congress being archetypal); and the enduring imperialization of the presidency. In short, there is a chasm of difference between the constitutional ought and the political is.

It is in the conduct of government that the constitutional oath taken by all public officers – military and non-military alike – comes most clearly into play. Whereas the president swears, upon entering office, to preserve, protect, and defend the Constitution, which in turn obligates him to take care that the laws be faithfully executed, all others swear, freely and without mental reservation, to support and defend the Constitution against all enemies, foreign and domestic, and to bear true faith and allegiance to the provisions of that document. This means that those who take the oath agree to adhere to and ensure the preservation of the values, principles, processes, and institutional prerogatives and arrangements specified and embodied in the Constitution’s Preamble, main body, and amendments. When the reality of government runs demonstrably counter to the ideas and ideals embodied in the Constitution, what are those who have sworn an oath of allegiance to this capstone document — the supreme law of the land — to do?

The same applies to national-level leadership. Ideally, the leadership we seek and like to think we have is characterized by the cardinal imperatives of vision, courage, competence, integrity, accountability, and empathy. The reality of leadership in Washington today – and for much of the recent past – has been quite the opposite, what we might call ‘The Saga of the Vanishing Role Models’: myopia (tunnel vision, parochialism, provincialism); cowardice (sycophancy, toadyism, obsequiousness); incompetence (cluelessness, incomprehension); hypocritical expediency (opportunism, dissembling); unaccountability (finger-pointing, blaming); and intolerance (hateful -isms too numerous to mention). Here the question is: what are those who represent an institution that prizes leadership so highly and who therefore expect to be capably led to do in the face of anti-leadership?

Similarly, just as the military prizes and looks for leadership, so too do its uniformed members focus immense attention on the ethics of those in public office. Notwithstanding the hundreds of acts of misconduct (atrocities, corruption, sexual assault, etc.) perpetrated each year by those in uniform, military professionals tend to unreservedly consider themselves and their profession to be models of rectitude, certainly more so than society as a whole. When they judge the behavior of public officials, to whom they are expected to defer, they look for palpable demonstrations of conscience, character, principle, example, altruism, and truth-based justice. What they regularly see, instead, is a political reality of unhesitating shamelessness; excessive pridefulness, self-absorption, and me-ism; convenience and expediency invariably trumping consistent standards; the prevailing irrelevance of model behavior; selfishness, demonization, denigration, and marginalization; and the death of truth (in favor of false narratives and constructed reality).

The civil-military social contract is unique in that it revolves around an institution charged with managing violence on behalf of the state, but also in that uniformed professionals swear an oath of allegiance that binds them to the Constitution, not to the political party in power nor to individual elected officials. If the military, as recompense for the autonomy, the rights, and the voice its members willingly relinquish, expects constitutionally sound behavior and competent, ethical leadership from its civilian masters, but time and again is met by the opposite, why should the public the military is charged with representing, serving, and protecting expect those in uniform to continue silently saluting and saying, “Three bags full, sir,” regardless of what they are directed to do or why?

Given the sometimes alarming experience of the past four years, and the anticipation of potentially ominous conditions yet ahead, we owe it to ourselves as a responsible citizenry to wake up and take notice, to seriously rethink civil-military relations, to question foundational precepts heretofore largely indifferent to the exigencies of the moment. How far will this commander in chief, a man known for respecting few limits of propriety or tradition, go in crossing the red line of idealized civil-military separation? How far will loyalist political authorities standing between him and the military go in carrying out his desires, however excessive? How far will an ostensibly co-equal branch of government, the Congress, charged with checking and balancing executive excess, go in turning a blind eye to misuse and abuse of the military? How far will a hierarchical, authoritarian military, led by career-minded senior officers who demand unquestioning obedience from their subalterns, while themselves being captive of unquestioning obedience to authority, go in testing the limits of constitutional propriety they have sworn to uphold? And how far will a general public, largely indifferent to and ignorant of military affairs, go in tolerating the debilitation of a civil-military relationship they don’t really comprehend?

We, the source of popular sovereignty in this constitutional republic, may soon find out. Let us pray that we somehow stumble upon a measure of wisdom and courage to save us from ourselves.