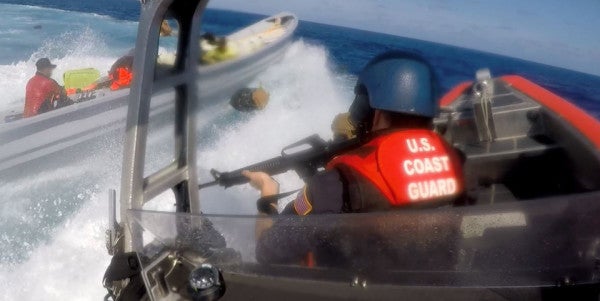 “The Coast Guard has interdicted more than … 1.3 million pounds of illicit cocaine in the last three years, and that rolls up to be about $18 billion of wholesale value on American streets,” Coast Guard Commandant Adm. Karl Schultz said Thursday aboard the cutter James, which was offloading nearly 38,000 pounds of cocaine seized in the eastern Pacific Ocean.

The pursuit of traffickers on the high seas, working with other US agencies and international partners, was part of what Schultz described as a “push-out-the-border strategy” to target the smuggling process at the point when the loads were the largest and most vulnerable.

Packages of cocaine line the deck of the U.S. Coast Guard Cutter Morgenthau after the crew, working in conjunction with the Panamanian Navy, intercepted and seized the contraband from suspected smugglers during a two-month patrol off the coast of Central and South America. 2012.

“We're pushing our land border 1,500 miles deep into the ocean here a little bit, and that's where we find the success taking large loads of cocaine down at sea,” Shultz said aboard the James, which seized more than 19,000 pounds of the cocaine offloaded on Thursday.

“When we take down drugs at sea it reduces the violence. It maximizes the impact. When these loads land in Mexico, in Guatemala, Honduras, Panama, they get distributed into very small loads, very hard to detect, and there's associated violence,” he added.

But the Coast Guard can see much more than it can catch.

In the eastern Pacific Ocean, where about 85% of the cocaine smuggling between South America and the US takes place, “We have visibility on about 85% of that activity,” Schultz said. “Because of the capacity — the number of ships, the number of aircraft — about 25% to 30% of that,” he added.

Schultz is not the first Coast Guard official to note the gap between what the service can see and what it can stop.

In September 2017, Adm. Charles Ray told senators that the service has “good intelligence on between 80% and 90% of these movements,” referring to trafficking in the eastern Pacific Ocean and Caribbean.

But “we only have the capacity to get after about 30% of those” shipments, added Ray, who is now the Coast Guard's vice commandant.

The eastern Pacific Ocean from the west coast of South America to the Galapagos Islands and up to waters off western Mexico and the southwest US is an area about the size of the continental US, Ray said.

“On any given day we'll have between six to 10 Coast Guard cutters down here,” he added. “If you imagine placing that on the United States … it's a capacity challenge.”

The Coast Guard provides the “biggest bang for the buck,” Zukunft told The New York Times in summer 2017. “But our resources are limited.”

“As a result, we can't catch all the drug smuggling we know about,” Zukunft added. “Just last year we had intelligence on nearly 580 possible shipments but couldn't go intercept them because we didn't have the ships or planes to go after them.”

Schultz acknowledged that with more resources the Coast Guard could stop more, but said the service was getting the most out of its assets and its partners — including the Defense and Homeland Security departments and other countries in the region.

“We have DoD support, we have partner-nation contributions … so it's that team sport, but there is a conversation about capacity,” Schultz said. “More Coast Guard capability, more enablers like long-range surveillance airplanes and … we'd take more drugs off the water.”

“What I'm proud about is we're putting every ounce of energy we've got into this fight.”

The Coast Guard has said it caught a record six narco subs in fiscal year 2016, which ended in September 2016. In September 2017, the service said it had seen a “resurgence” of such vessels, catching seven of them since June that year.

“We're seeing more of these low-profile vessels; 40-plus feet long … it rides on the surface, multiple outboard engines, moves 18, 22 knots … and they can carry large loads of contraband,” Schultz told Business Insider earlier this year.

Narco subs can cost $1 million to $2 million but can carry multiton loads of cocaine worth tens of millions of dollars in the US.

The crew of the Coast Guard Cutter Active, a 210-foot medium endurance Reliance-class cutter homeported in Port Angeles, Washington, interdicts more than 1 ton of cocaine from four suspected drug smugglers during a counter-narcotics patrol in the eastern Pacific Ocean, Friday, May 18, 2018.

Mike Vigil, former chief of international operations for the US Drug Enforcement Administration, estimated Colombian traffickers were building 100 narco subs a yearand said the DEA believed at least 30% to 40% of drugs coming to the US were moving on those vessels, but authorities were likely only intercepting 5% of them.

The Coast Guard's own estimate indicates that it can block only a sliver of the narcotics coming to the US by sea.

Asked what was needed to address the flow of narcotics, Ray in late 2017 pointed to the offshore-patrol-cutter program, which the Coast Guard has said will bridge the gap between national-security cutters like the James, which patrol open ocean, and fast-response cutters, which patrol closer to shore.

The first offshore-patrol cutter isn't scheduled to be delivered until 2021.

A pallet of cocaine sits on the flight deck of the Coast Guard Cutter Stratton in San Diego, Oct. 3, 2018.

Coast Guard officials have touted the capabilities of national-security cutters, like the James, which were introduced in 2008 and of which six are in service.

But the other cutters that seized drugs offloaded by the James on Thursday were, on average, 41 years old, “and are increasingly more difficult to maintain and more costly to operate” Claire Grady, the Homeland Security Department's chief of management, said on Thursday.

“For the Coast Guard to remain always ready to combat transnational crime and conduct its 10 other statutory missions,” Grady added, “it's imperative to recapitalize its aging fleet.”