DoD Just Paid For A Soldier’s Gender-Reassignment Surgery. What Does It Mean For Trump’s Transgender Ban?

The Department of Defense covered the cost of an active-duty Army soldier’s gender-reassignment surgery on Nov. 14 after the operation... 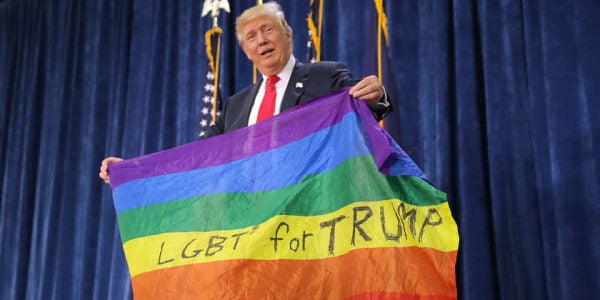 The Department of Defense covered the cost of an active-duty Army soldier’s gender-reassignment surgery on Nov. 14 after the operation was approved under a waiver, NBC News reports.

The soldier identifies as a woman, serves in the infantry, and earned her Combat Infantry Badge during Operation Anaconda — a 2002 battle between Taliban fighters and conventional U.S. combat troops in Paktia province, Afghanistan — according to a source close to the service member who spoke with NBC News.

The waiver was approved Nov. 13 by Vice Adm. Raquel Bono, the head of the Defense Health Agency, which handles medical care for active-duty troops.

“Military hospitals do not have the surgical expertise to perform this type of surgery, therefore it was conducted in a private hospital,” the Department of Defense said in a Nov. 14 statement, adding that the waiver was approved “because this service member had already begun a sex-reassignment course of treatment, and the treating doctor deemed this surgery medically necessary.”

News of the surgery comes four months after President Trump announced via Twitter his intention to enact a ban on transgender service members; in August, he signed a memo barring the Pentagon from enlisting transgender recruits and halting future funding for gender-reassignment surgery.

Trump's surprise tweetstorm came just one month after Secretary of Defense James Mattis gave the service chiefs an additional six months to finish reviewing the impact of enlisting transgender service members, saying policy decisions must be weighed against one standard: Whether it impacts the military’s ability to defend the country.

Since the July announcement, the president’s proposed ban has sparked heated debate over whether the the commander in chief even has the constitutional authority to change the American military with the swipe of a smartphone screen (or the scribble of a pen, for that matter), as Task & Purpose’s Adam Weinstein reported earlier this year:

Every good mudfoot knows that the president is vested with the authority of commander-in-chief of the U.S. armed forces (and “the militia of the several states”) under Article II, Section 2 of the U.S. Constitution. But as the Center for New American Security’s Phillip Carter points out, authority over the actual composition of the military belongs to lawmakers thanks to the stipulation in Article I, Section 8 that Congress has the power to “raise and support armies …. provide and maintain a navy … make rules for the government and regulation of the land and naval forces.” Just as the president must seek congressional approval for declaring war and appointing inferior officers, so must lawmakers eventually approve changes to the armed forces.

And more hurdles have followed. Two weeks ago, a federal judge temporarily halted the ban, which was set to go into effect March 2018, ruling that the policy justification was likely unconstitutional and based on “disapproval of transgender people generally,” according toThe New York Times.

Even before the Oct. 30 court decision, Trump’s transgender ban was facing opposition from within the military. After the president’s July 25 “policy by tweet” sent transgender service members scrambling for answers regarding their status in the armed forces, Chairman of the Joint Chiefs of Staff, Marine Gen. Joseph Dunford announced July 27 that, no, the military will not be changing policy based on a tweet.

On Aug. 29, Mattis announced that the DoD would establish a panel to “analyze all pertinent data, quantifiable and non-quantifiable,” related to transgender troops in the military. “In the interim, current policy with respect to currently serving members will remain in place,” Mattis said in the statement.

Trump's transgender ban, which cited cost concerns and “disruption” to unit-cohesion as the principal reason for the policy’s implementation, has also faced pushback due to the fact that research doesn’t support those claims.

After consultation with my Generals and military experts, please be advised that the United States Government will not accept or allow……

….Transgender individuals to serve in any capacity in the U.S. Military. Our military must be focused on decisive and overwhelming…..

….victory and cannot be burdened with the tremendous medical costs and disruption that transgender in the military would entail. Thank you

According to a 2016 study by The RAND Corporation, allowing transgender troops to serve openly in the military would have a “minimal impact on readiness and health care costs” for the Pentagon. The report estimated that health care costs would rise from $2.4 million to $8.4 million, which in the context of the overall defense budget, is an increase from 0.04% to 0.13%, The New York Times notes.

Focusing on the policies of four — out of 18 countries — which allow transgender personnel to serve openly, the study concluded that “in no case did the RAND team find evidence of an effect on operational effectiveness, operational readiness or cohesion.”