Flynn Pleads Guilty On Russia Charge, This Shit Is Real, So Get A Helmet

Retired three-star Army general Michael Flynn, who for 33 years in uniform swore to support and defend the Constitution of... 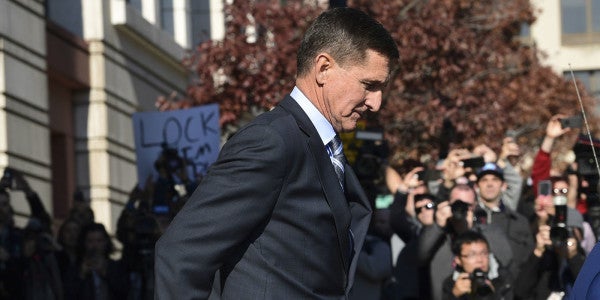 Retired three-star Army general Michael Flynn, who for 33 years in uniform swore to support and defend the Constitution of the United States against all enemies foreign and domestic, pled guilty Friday morning to lying to the FBI about his attempts at secret policy coordination with the Russian ambassador to the U.S. in 2016. The move could trigger a major unraveling of the United States’ Donald Trump revolution.

Flynn’s federal guilty plea appears to be part of a deal with Special Counsel Robert Mueller to tell investigators all he knows about Russian coordination, and possibly more, by members of the Trump campaign, the Trump White House, and perhaps even President Donald Trump himself.

.@GStephanopoulos: Michael Flynn "has pleaded guilty to charges of giving false statements to the FBI. That would suggest he is now cooperating with special counsel Robert Mueller." https://t.co/cBjd9Uk81y pic.twitter.com/iHD72oPrtM

“The actions I acknowledged in court today were wrong, and, through my faith in God, I am working to set things right,” Flynn said in a statement released through his attorney after the court appearance. “My guilty plea and agreement to cooperate with the Special Counsel’s Office reflect a decision I made in the best interests of my family and country.” Flynn previously gained fame for popularizing the anti-Hillary Clinton catchphrase “Lock her up!” over what he called her poor handling of classified information.

In a few short years, Flynn went from being the Pentagon’s chief intelligence, to a member of Trump’s inner campaign circle and a purveyor of laughable anti-Democrat conspiracy theories like a (nonexistent) sex-trafficking ring run out of a Washington pizza parlor. After Trump’s inauguration, Flynn was named national security advisor.

Related: Flynn Stopped Military Plan Turkey Opposed — After Being Paid As Its Agent »

In the meantime, however, he’d secretly done lobbying for Turkey’s repressive president, taken massive payments for cooperating with Russian state media, and had multiple contacts with Russian officials even before his abortive, 24-day stint on the White House payroll.

It was those contacts that boxed Flynn into his quick court appearance Friday. Threatened with a host of serious charges that could take down him along with his cantankerous son and personal aide, Michael Flynn Jr., the elder Flynn agreed to plead guilty to concealing what he’d asked Russian Ambassador Sergey Kislyak for in December 2016, before Trump had even taken office.

Specifically, Flynn asked Kislyak to ensure that Russia wouldn’t retaliate against the U.S. after the outgoing Obama administration imposed tough sanctions on the former Cold War foe over its interference in Trump’s presidential election. Kislyak said the Russian government would abide by Flynn’s request.

Flynn concealed that conversation from FBI investigators, along with another request Kislyak had fulfilled for him — probably because he recognized they constituted illegal conduct of foreign policy by someone who wasn’t even in the U.S. government yet. And now he admits he did it.

Related: Mike Flynn Offers To Be interviewed By FBI In Exchange For Immunity »

What does that mean for President Trump? Potentially a lot. It’s not clear what Flynn knows. He has regularly proven not quite the intellectual powerhouse he considers himself to be. But plenty of observers note that the day after that 2016 Flynn-Kislyak chat about sanctions — which, again, Flynn concealed from FBI investigators, and supposedly lied to Mike Pence about — President-Elect Trump was jubilantly tweeting that Russian President Vladimir Putin was doing the right thing in response:

Mueller’s team says Flynn spoke w/an official on Trump's transition team who was at Mar-a-Lago on 12/29/16 to discuss what to say to Russian ambassador. This tweet the next day from POTUS looks bad for…POTUS. pic.twitter.com/UiUU3h1bzN

So it all comes back, again, to what the president knew and when he knew it. Plus all the other people around the president. Who, evidently, did not take the Flynn news well:

Reporters indicating that they're getting texts and emails from sources inside the White House. That place appears to be freaking out over the Flynn news.

But soon enough, White House officials were back in true form with the kind of talking point that seems like a self-own:

Via CNN's @GloriaBorger: "One source close to the president attempted to mitigate the severity of the charge against Flynn by pointing out that everyone lies in Washington."

Meanwhile, uniformed personnel at the Pentagon, Flynn’s old haunt, looked at his plea very differently from the political players at 1600 Pennsylvania Avenue:

Despite everything, one gets the sense here at the Pentagon that people here, first and foremost, see a 3-star Army general just plead guilty to lying to the FBI. The shock around that incongruous image of a military commander is palpable here.