For POTUS, A VFW Convention Is No Different From A Political Rally

KANSAS CITY, Mo. — President Donald Trump praised the country’s veterans and active military in a speech Tuesday to the … Continued 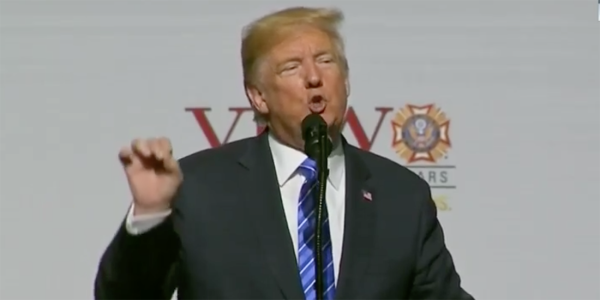 KANSAS CITY, Mo. — President Donald Trump praised the country’s veterans and active military in a speech Tuesday to the annual Veterans of Foreign Wars convention, but spent much of his 54 minutes on stage as if it were one of his political rallies — promoting himself and other Republicans and attacking Democrats and the media.

Though the convention center was half-empty, Trump clearly relished the applause from a friendly crowd estimated at about 4,000 veterans and spouses. And though it was ostensibly a nonpolitical event, right from the start he began hitting many of the applause lines familiar from his campaign speeches.

Within minutes the president brought up to the stage the Republican candidate for U.S. Senate from Missouri, calling him “hopefully your new senator-to-be.” He urged the audience to elect other Republican “reinforcements” to Congress, slammed Democratic Reps. Nancy Pelosi, the House minority leader from San Francisco, and Maxine Waters of Los Angeles, and charged that Democrats generally support crime and open borders.

Trump has turned other nonpolitical appearances into partisan ones, but few so overtly as the speech before the VFW convention — a stop that presidents often make, with their focus on veterans’ service. Taxpayers pay for presidents’ travel to official events; a president’s party is supposed to cover costs for political ones.

With the audience cheering his strongest broadsides, the president sharpened his political message not only for the November midterm elections but for his own re-election in 2020. He attacked Democrats who want to abolish the U.S. Immigrations and Customs Enforcement agency for carrying out his “zero tolerance” policy, which separated nearly 3,000 migrant children from their parents at the Southern border before Trump was pressured to stop it.

“Democratic politicians want to abolish ICE,” Trump said. “They want to see open borders” and have launched “vicious smears on the men and women who protect our communities,” he added.

Trump called his political opponents the “disciples of a really low-IQ person, Maxine Waters — and perhaps even worse, Nancy Pelosi.”

Introducing the Republican Senate candidate, Missouri Attorney General Josh Hawley, Trump said, “We need Josh badly.” Hawley returned the praise and then some as Trump stood behind him smiling and nodding.

After briefly thanking the veterans for their military service, Hawley continued, “But how about the leadership of President Donald Trump?”

“You know, when I think about President Trump, there’s one word that comes to mind. That word is ‘courage,’” Hawley said. He listed several Trump actions as evidence, ending with the claim that the president has “the guts to put conservatives on the Supreme Court of the United States.”

Trump reminded the crowd that Hawley’s opponent, Democratic Sen. Claire McCaskill, voted against the tax cuts that he and congressional Republicans enacted late last year. He credited the tax cuts for recent economic growth, and noted that unemployment among veterans has fallen “to the lowest level in almost 18 years.”

“We’re now in the midst of a great economic revival,” Trump said.

The glancing reference to his ongoing culture war with the mostly African-American NFL players who kneel before games, in protest of racial injustice, drew a loud ovation. That reaction was matched only by the one to his attack several minutes later against the “fake news” media.

But the president, appearing in a farm state, was more defensive about his recent trade tariffs, which have sparked retaliatory tariffs and threats of more from American trading partners, reducing the prices that farmers across the Midwest get for their products.

While Trump didn’t mention it, his administration in Washington had just announced that it would provide $12 billion in relief for farmers hurt by retaliatory tariffs imposed by China and other nations. The president did reiterate his complaints against the trade deficits the United States runs with many of those trading partners, using inaccurate figures and depicting the deficits as lost money when they represent U.S. purchases of other nations’ goods.

“Last year, our country lost $817 billion, with a ‘b,’ dollars on trade,” Trump said. “These countries have been ripping us off for decades.”

The president specifically mentioned China as well as the European Union, whose representatives are scheduled to meet with Trump at the White House on Wednesday to discuss trade issues.

Holding fast to the economic populism that helped him get elected, the president asked for patience from nervous farmers and manufacturers and promised things would work out.

“The farmers will be the biggest beneficiary,” he added. “Just be a little patient.”

“Just stick with us,” Trump said at another point, “and remember, what you are seeing and what you are reading is not what is happening.”

The speech came a day after Trump threatened Iran, stoking new fears of a military confrontation in the Middle East, and the White House announced he might strip some former intelligence officials of their security clearances because they have been critical of him in media interviews.

He didn’t mention the security clearances and spoke in brief, broad terms about Iran. “We’ll see what happens,” Trump said.

Trump reiterated his promises to strengthen the military, mentioning new expenditures on fighter jets and Navy ships and a pay increase for active-duty service members. He also spoke of improvements to the Department of Veterans Affairs that he said have resulted in faster claims processing, better health care, same-day mental health services and greater accountability.

Trump claimed that his administration had accomplished “some of the largest VA reforms in the history of the VA … probably the largest.” Accompanying him was Robert L. Wilkie Jr., who was confirmed by the Senate on Monday to be the new VA secretary.

Referring to Wilkie’s confirmation, on an 86-9 vote, Trump said that only the “super-lefts that are running against me in 2 1/2 years” voted no.