Immigrants: always doing the low-paying jobs nobody else wants, right? Keep that in old cliché mind while watching this video: … Continued 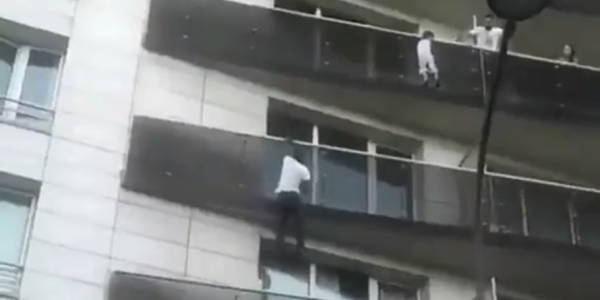 Immigrants: always doing the low-paying jobs nobody else wants, right? Keep that in old cliché mind while watching this video:

This is amazing. A passerby climber 4 stories in 30 seconds to save that toddler in Paris that was dangling from a balcony. The young man, Mamoudou Gassama is a hero. pic.twitter.com/anBMSAIctP

And keep it in mind while reading this gripping lede from the New York Times about the hero you just saw springing into action as the crowd goes nuts below — not a French commando or gendarme, but a 22-year-old Malian immigrant named Mamadou Sassama:

PARIS — The 4-year-old boy seemed to be suspended from a balcony. An adult standing on a nearby balcony seemed powerless to help. Disaster seemed the only possible outcome.

Then, to the nimble rescue on the streets of Paris on Saturday evening, came a young man whom some French people have started to call the Spider-Man of the 18th, referring to the arrondissement of Paris where the episode unfolded.

With a combination of grit, agility and muscle, the man hauled himself hand over hand from one balcony to another, springing from one parapet to grasp the next one up. A crowd that had gathered before he began his daring exploit urged him ever upward, according to onlookers’ video that was shared widely on social media.

Finally, after scaling four balconies, the man reached the child and pulled him to safety. And suddenly, an act of individual courage and resourcefulness began to play into Europe’s fraught and polarized debate about outsiders, immigrants and refugees.

Sassama “journeyed through Burkina Faso, Niger and Libya before making the dangerous Mediterranean Sea crossing to Italy and arriving in France in September, without documentation,” the Times explains. Which, depending on your perspective, either makes him a dirty criminal invader or a pretty compelling BUD/S candidate. Based on his work this week, I'm inclined to think the latter.

French President Emmanuel Macron apparently agrees, having met with Sassama Monday and decreed that he will be fast-tracked for French citizenship.

Macron and Sassama meet at the French presidential palace on Monday.Pool photo by Thibault Camus via NYTimes

Which is appropriate and terrific, but given France's tightening immigration rules in the wake of the Syrian refugee crisis, it's also kind of nuts that you have to literally save a native-born child to get your rights. But that's where humanity's at these days. To win the presidency last year, Macron had to tack hard right on immigration, blocking out the nativist candidate, Marine Le Pen. “Mass immigration is not an opportunity for France, it's a tragedy for France,” Le Pen had said, vowing that in the face of “savage globalization… I will protect you.”

Turns out the best protection France could have this week was a 22-year-old border-crosser.