Iran Harassed The US Navy Under Obama. Here’s Why It Stopped Under Trump

Iran's navy made a point of harassing and humiliating U.S. Navy vessels in 2016 after then-President Barack Obama sealed the... 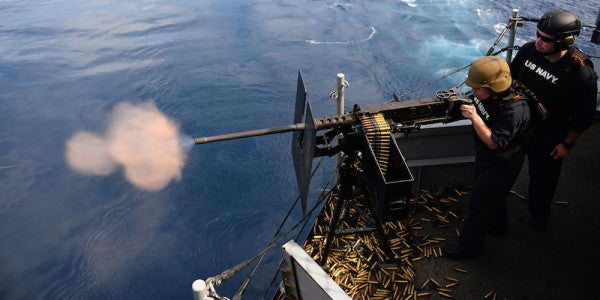 Iran's navy made a point of harassing and humiliating U.S. Navy vessels in 2016 after then-President Barack Obama sealed the Iran nuclear deal, but the U.S. says things have changed since August 2017.

“It seems like they've absolutely made a conscious decision to give us more space,” Navy Cmdr. William Urban recently said. “That is definitely a change in their behavior.”

During Obama's presidency, Iran would charge Navy ships with fast attack craft, buzz fighter jets with drones, and even shine lasers at helicopters operating at sea.

But the worst, most embarrassing incident occurred in January 2016, when Iran's navy seized two Navy riverine boats and the 10 sailors on board after the ship wandered into Iranian waters due to mechanical issues. They broadcast footage of the sailors, crying, in detention, on television across the country. Iran later announced plans to build a monument commemorating the event.

Later that year Iranian ships conducted “unsafe and unprofessional,” and often taunting, maneuvers around Navy ships in the Persian Gulf five times in about a month.

In September of that same year, Trump addressed Iran while on the campaign trail. “When they circle our beautiful destroyers with their little boats and they make gestures at our people that they shouldn't be allowed to make, they will be shot out of the water,” Trump said.

Shortly after Trump's election, the incidents noticeably stopped despite Trump's open hostility towards Iran, compared to Obama's attempts to appease them.

The “openly acknowledged there was a shift that happened roughly around the time we had our political transition,” Jonathan Schanzer, vice president of the Foundation for Defense of Democracies, told Business Insider. “There was a status quo and the status quo changed.”

According to Schanzer, the Trump administration gave no official warning to Iran over the naval incidents, but instead, “the unpredictability of Trump has made Iran more reticent to test American red lines.”

Compared to the U.S. Navy, the best on earth, Iran's navy just treads water. Iranians, even the hardliners, must know their small attack craft can't pose a meaningful threat to U.S. ships, and even if they could, U.S. retaliation would devastate the forces.

Instead, rushing U.S. ships and putting them on the defensive, as well as capturing sailors, works mainly for propaganda purposes for Iran, whose authoritarian regime controls the media and pushes a heavily anti-U.S. agenda.

With Trump similarly focused on optics and pledging to revitalize the U.S. military, Iran may have pivoted towards quietly pursuing its foreign policy goals, rather than making a scene that Trump could react to violently.

“There's another side of this,” said Schanzer. “They understood that there was a change in the rules of the risk/reward calculus, but they also seem to understand that there was less of a policy with regard to their regional activity from Yemen to Iraq to Syria.”

So while Iran has dropped the very visible, U.S.-centric naval run-ins, it's picked up on recruiting militias, deploying its armed forces to Syria, and supplying anti-U.S. and anti-Israel militant groups.

“They realize if they want to actually achieve their objectives across the Middle East, they needed to dial back on the harassment that would needlessly provoke the U.S.,” Schanzer said.