Why Jordan May Be The Next Battleground Against ISIS

The Islamic State may be receding in Iraq and Syria, but its militants may soon find safe harbor nearby—in the... 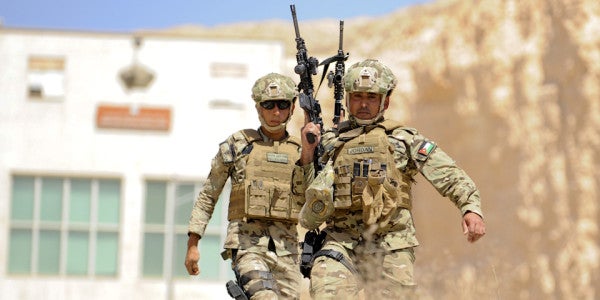 The Islamic State may be receding in Iraq and Syria, but its militants may soon find safe harbor nearby—in the Hashemite Kingdom of Jordan.

Jordan’s reputation as a stable nation and a key ally in the fight against ISIS in Iraq and Syria has positioned it at the forefront of the U.S.-led “War on Terror.” But growing signs within the Kingdom suggest that the country, for all of its ties to the West, could soon become a serious post –Syrian target for the Islamic State.

In August 2018, a terrorist attack in the city of Al-Salt killed four Jordanian security officers and injured sixteen civilians. Five Jordanian nationals subscribing to the radical ideology of the Islamic State were arrested following the attack. The attackers had large amounts of homemade explosives buried nearby, which were intended for future attacks on civilians and security installations.

The incident shattered the tenuous calm that has prevailed within the kingdom in recent years. But it may also be a portent of things to come. That is because extremist activity in Jordan has been on the rise since 2015, as the Syrian war steadily bled over into the country, triggering a growing number of terrorist cells and attempted attacks.

The numbers tell the story — Jordan ranks as the third largest source of foreign fighters to the Islamic State “caliphate.” An estimated 3,000 Jordanian militants have traveled to join the ranks of the Islamic State, proving that the country is deeply susceptible to radicalization. Moreover, a 2017 report by the International Center for the Study of Violent Extremism details that while many Jordanians are attracted to ISIS because of unemployment and poverty, issues like marginalization, poor governance, and religious education also play a significant role in recruitment and membership. Additionally, many Jordanians feel that they have an obligation to defend embattled Sunni co-religionists in Syria.

As ISIS continues to decline in both Syria and Iraq, we can expect foreign fighters to make their way back to their respective countries of origin. In the case of Jordan, 250 of them already have . And while previously Amman had been successful at preventing attacks, it will become increasingly difficult to do so as the Jordanian “alumni” of the Syrian civil war begin to flood back. These foreign fighters, equipped with the Islamic State’s corrosive ideology and armed with combat training and battlefield experience, will have the ability to recruit and mobilize vulnerable populations directly—or influence them through proxies and family connections.

The most at risk of these is arguably the country’s Syrian refugee population. As of February 2018, there were estimated to be 657,628 Syrian refugees in Jordan, roughly equivalent to seven percent of the country’s overall population of 9.5 million. These refugees currently reside in dire conditions, living in overcrowded camps where they are subject to high levels of hunger, poverty, and local crime—all of which serve as major potential contributorsto radicalization.

The country’s counterterrorism policy, meanwhile, remains hotly contested. For instance, Jordan’s government has criminalized the act of joining or even promoting terrorist organizations, including the Islamic State. But this focus on “hard security” has made it difficult for authorities in Amman to stem radical recruitment or proactively engage in ideological competition.

The Hashemite Kingdom is beginning to get help on this score. In March 2018 , the country partnered with the United States to launch a new counterterrorism training center south of Amman. The center, which is designed to increase Jordan’s capability to combat domestic terrorism, comes with a four-year pledge of some $350 million in military aid.

However, this effort is still nascent and has yet to yield any tangible results in improving Amman’s security situation. It is also an exception—the international community has generally paid little attention to Jordan’s vulnerability, preferring to focus on dismantling the Islamic State’s Syrian “caliphate” and fighting ISIS fighters headed to Europe.

That is an error. The evidence is increasingly clear; Jordan’s mix of vulnerable, at-risk populations and exposure to Islamism make it a prime candidate for subversion. The Islamic State already knows this all too well. The August 2018 al-Salt terrorist attack should serve as a wake-up call for the international community as well.

Emily Przyborowski is a researcher at the American Foreign Policy Council in Washington, DC. This article originally appeared on The National Interest