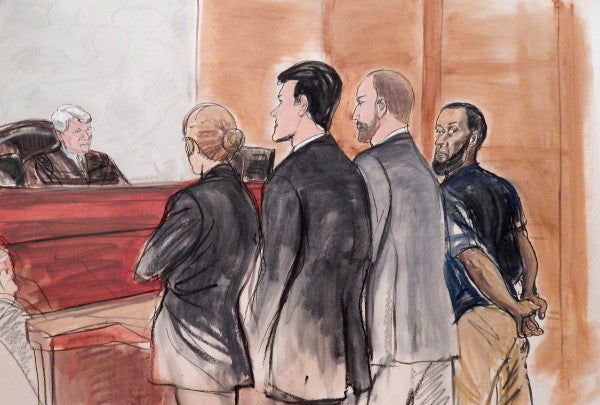 The New York Times recently shared a story by reporter Stephanie Clifford about a New Jersey man facing terrorism charges after being arrested for trying to join the Islamic State. Tairod Nathan Webster Pugh was stopped in January by authorities in a Turkish airport carrying a laptop with information on crossing the Turkey-Syria border, as well as 180 jihadist propaganda videos, according to his federal indictment. He returned to the U.S. five days later and was arrested Jan. 16 in Asbury Park, New Jersey.

The New York Times ran the headline, “Air Force Veteran From New Jersey Tried to Aid ISIS, U.S. Charges” and referred to the man as a veteran twice more, before relaying his actual name to the reader:

An Air Force veteran from New Jersey, recently fired from his job as an airplane mechanic, has been charged with trying to support the Islamic State by seeking to join the group.

The veteran, Tairod Nathan Webster Pugh, a 47-year-old American citizen, tried to travel into Syria in January after being fired from his job in the Middle East, prosecutors said.

Seeing as it's been roughly 25 years since the 47-year-old Pugh served in the military, it's a bit hard to discern why his military service was featured so prominently by the Times. According to Pugh's indictment, he was an avionic instrument specialist in the U.S. Air Force from 1986 until 1990, where he installed and maintained aircraft engine, navigation, and weapons systems. Following his discharge from the military, Pugh worked as a mechanic in the private sector, including for American Airlines. In 1998, he converted to Islam and over time “became increasingly radical in his beliefs.”

The New York Times' depiction of Pugh as a veteran is technically accurate, but the editorial decision to feature that detail so prominently is troubling. Even though the New York Times led with Pugh's veteran status, the article fails to draw any direct connection between his military experience and his decision join ISIS, or how that military experience is remotely newsworthy whatsoever. So, why play the veteran card?

If a U.S. military veteran were to use his or her training and skill set to promote and propel the terrorist mission of ISIS, that would be an incredible story, especially if that person were a veteran of the conflicts in Iraq or Afghanistan. It would stand in stark contrast to dozens of reports of U.S. veterans voluntarily returning to the region to join Kurdish Peshmerga or Syrian opposition forces in fighting ISIS. The New York Times has extensively and exceptionally covered this angle, a veteran joining ISIS' ranks would bring the whole narrative together, it would be huge.

But, that isn't quite what happened here.

Pugh served in the U.S. military during a period of peace a quarter of a century ago. There is no publically released evidence that Pugh's attempt to support ISIS, or his documented sympathy for Osama bin Laden, has any correlation with his four years in the Air Force; nor that the skills he attained as an Air Force mechanic would have made him an exceptional asset to the Islamic State. FBI special agent Ghailan Stepho, who wrote the Pugh indictment, does not draw any conclusions about how Pugh's military background could be an influencing factor in the case; in fact, Pugh's military experience is only briefly mentioned as background detailing Pugh's life, on the fourth page of a seven-page indictment.

We're not attempting to disavow Pugh as a veteran of the U.S. military, we're just wondering why it was the most important detail about him, given the timeline. It seems more that the story of Pugh is one of a home-grown, self-radicalized Jihadist who happened to have served in the Air Force a long time ago.

The New York Times wasn't the only outlet to lead his Pugh's veteran status. Here's a screengrab of the top stories when one searches “Air Force veteran New Jersey” in Google news.

And in its write up of the event, the popular email newsletter theSkimm failed to mention the timeline at all surrounding Pugh's affiliation with the Air Force or his age in their March 18 newsletter, only calling him, “a US Air Force veteran,” who was, “fired from his job as an airplane mechanic late last year.” To a reader who didn't know otherwise, it would seem Pugh recently transitioned from the Air Force to wanting to join ISIS. The newsletter even made a reference to “Homeland,” the television program that features a Marine who was converted into an Islamic fundamentalist when he was captured. TheSkimm also falsely implied that Pugh was from Brooklyn. He is from New Jersey, but was arraigned at a federal courthouse in Brooklyn.

Watch how ABC News covered the story to see what we mean. Story continues below.

This rush to characterize Pugh as a veteran stands in contrast to how countless groups rightfully draw editorial caution when people affiliated with them are involved in news stories. In a notable instance, Mohammed Salameh, the man convicted on terror charges for his involvement in the 1993 World Trade Center bombing in New York was described in a New York Times headline as “JERSEY CITY MAN IS CHARGED IN BOMBING OF TRADE CENTER AFTER RENTED VAN IS TRACED.” It's a bit odd to use the suspect's affiliation with Jersey City, New Jersey, as his defining characteristic, especially since that indictment, and much of the article, noted his alleged deep ties to Islamic fundamentalism.

We're not faulting the Times staff for its abundance of caution in 1993. They displayed an understandable hesitance in rushing to connect Islam with Salameh's motivations and identity. But we are questioning why veterans seem to be exempt from that thoughtfulness; why the salaciousness of one's affiliation with the military, even if it were almost three decades ago, cuts above everything else.

Just days ago, in fact, BuzzFeed presented a photo series on modern veterans struggling with suicide and mental health under the headline, “This Jarring Photo Series Captures What PTSD Really Looks Like.” This, despite the fact that most people who suffer from post-traumatic stress were never in the military. PTSD affects an estimated 7.7 million American adults, according to the National Institutes of Health, a population roughly three times the size of that which deployed to Iraq or Afghanistan over the past 15 years. In fact, while women comprise just about 15% of the active-duty military, they make up the majority of PTSD victims, as women are more than twice as likely to suffer from post-traumatic stress than men. The photos in Buzzfeed's article, from the Veteran Vision Project, are absolutely jarring and powerful, but contrary to BuzzFeed's stance, they're not what PTSD looks like. It can be, but more often, PTSD looks like a normal person who statistically speaking, is likely a woman, who survived a car accident, an assault, or other traumatic event.

So in that vein, perhaps the media's portrayal of Pugh shouldn't be surprising. It's worth noting, however, that the headline the New York Times used for the web didn't make it into the March 18 print edition. That headline read, “U.S. Charges New Jerseyan With Seeking to Join ISIS.” By the next day, however, the Times and Clifford published a follow up that prominently featured Pugh's status as a veteran in the headline.