Some fear that civilian control over the military is dangling by a thread of very long hair. 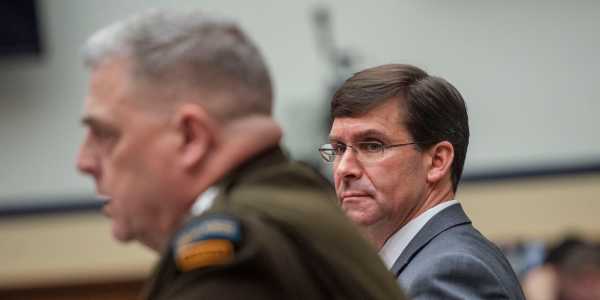 Rarely has the issue of military haircuts tested civil-military relations, but this is 2020.

The issue arose during Tuesday’s Pentagon news briefing, when Defense Secretary Mark Esper expressed alarm about a video showing Marines at Camp Pendleton, California, lined up outside of a barber shop. In the April 5 video, the Marines were clearly standing too close together and none wore a mask.

Clearly annoyed, Esper said the Marine Corps needed to suspend its requirement for haircuts – until the chairman of the Joint Chiefs of Staff interjected.

“Don’t take that as guidance yet,” said Army Gen. Mark Milley as Esper was still speaking.

Esper raised both of his hands in the air to signal he was temporarily yielding the floor to Milley, who continued: “Lot of ways to do haircuts.”

Jim Golby, a defense policy adviser at the U.S. mission to NATO, tweeted on Tuesday that Milley’s comments were inappropriate because the defense secretary is in the chain of command while the chairman of the Joint Chiefs of Staff is not.

“Disagreement is fine,” tweeted Golby, who is also an adjunct senior fellow at the United States Studies Centre. “Telling the force to ignore SecDef guidance isn't that.”

To put this issue in its proper context: The United States has not had a coup or been led by a military junta since it was founded more than 200 years ago. Therefore, it is unlikely that Gen. Milley’s comments about guidance on haircuts signals the end of the Old Republic.

Still, it would have been better if Milley had talked to Esper in private rather than disagreed with him during a press conference, said retired Navy Cmdr. Doyle Hodges, executive editor of Texas National Security Review.

“From my perspective, MIlley didn’t clarify Esper’s comments: He contradicted him in a way that suggests a deeply problematic understanding of the civ-mil relationship on Milley’s part,” Hodges told Task & Purpose on Wednesday.

Milley’s job is to provide his best military advice to the president, Hodges said. He does not have command authority over service members, so issues related to grooming standards should not fall within his purview.

In other words, not only did Milley contradict Esper, but the chairman also asserted authority that he does not have, Hodges said.

Just a reminder that the Chairman of the Joint Chiefs of Staff is not in the Chain of Command, but the Secretary of Defense is. pic.twitter.com/uwra4qYOOS

Once again, it is worth noting that Milley has not deposed Esper, nor has he declared that long-haired hippies pose an existential threat to American security. One could argue convincingly that former President Ronald Reagan vanquished the hippie threat years ago by shaming baby boomers into losing their mullets.

One former chairman of the Joint Chiefs of Staff said he does not see the exchange at Tuesday’s press conference as a strain on civil-military relations at all.

Retired Army Gen. Martin Dempsey said it is more likely that Milley was trying to explain how policy works, not undercut Esper.

“This is a time of high tension and intense scrutiny on everything that happens and I think he was just trying to make the point that if the policy needs to be clarified, that would happen through formal channels and not as part of a press conference or on Twitter,” Dempsey said.

Both Milley and Esper have developed a good working relationship over the years, going back to when Milley was Army chief of staff and Esper was Army secretary, Dempsey said.

“I don’t think this is worth dwelling on,” Dempsey said.

In retrospect, Milley should have taken a deep breath, planned his next haircut, and let Esper finish his sentence, said Loren DeJonge Schulman, of the Center for a New American Security think tank in Washington, D.C.

“Has he probably had 500 more conversations about haircuts in the last week than he planned to have in his lifetime? Absolutely, and he's probably stressed the hell out and wants to avoid another 500 conversations,” Schulman told Task & Purpose. Did he accidentally convey something about the Esper-Milley relationship that everyone will be salivating over like Megxit? Damn right he did.”