The Marine Corps doesn’t care if this image upsets you

"Waiting for the old salts to come in and talk shit," one commenter wrote, to which Yarbrough replied, "Me too!!!" And talk shit, they did. 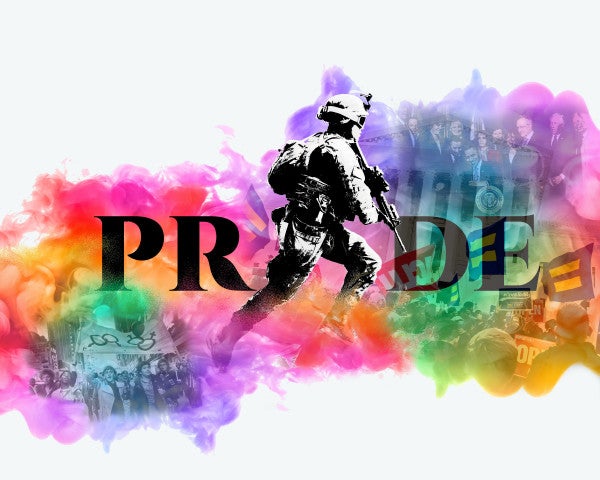 The announcement in honor of Pride Month comes every year for the Marine Corps, and along with it the angry pronouncements the Corps has gone soft, that it has bowed to political correctness and fallen victim to a “military social experiment.”

And so it went for the Corps again this year, another battle in the culture war being fought in the internet comments section. Only this time, Chief Warrant Officer Bobby Yarbrough, a public affairs officer for the service’s boot camp in South Carolina, was ready.

On Monday morning, the Facebook page of Marine Corps Recruit Depot Parris Island posted an illustration of a Marine running, standing in for the I in Pride, with photos behind it of gay rights activists interspersed in a cloud of rainbow-like color. The caption noted it was the 10-year anniversary of the repeal of “Don’t Ask Don’t Tell,” a Clinton-era policy that allowed gay and lesbian people to serve in the military as long as their sexuality was kept secret. The Obama administration repealed the law in 2011.

By Monday evening, the photo had been shared more than 500 times and attracted nearly 1,000 comments, many of them critical. It’s more than double that now.

Yarbrough did not respond to a request for comment from Task & Purpose.

“Very disappointed! Totally against my morals and beliefs!” wrote one man, Michael, his profile photo revealing gray hair and a goatee. “The current day Marines that also disagree will have this thrown in their faces and because they disagree they will likely be ridiculed,” he added, concluding that the Corps had succumbed to influences that “do not belong,” presumably meaning gay and lesbian people. The comment earned more than 100 likes.

Yet the response, from Yarbrough, received far more support: “No one is asking you to do anything but accept them as themselves,” he wrote in response to Michael. “You don’t have to agree or disagree, just treat them like everyone else.”

Yarbrough wasn’t finished. There was also Jeff, who asked, “why is this important to celebrate? Diversity is not the mission of the Corps.”

“Because the Commandant says so,” came the response, which linked to a Marine administrative message, published earlier this month, explaining that lesbian, gay, bisexual, and transgender Pride Month is celebrated each year in June.

Although the Pentagon does not maintain statistics on the number of LGBT service members currently in the ranks, one study estimated in 2016 there were between 63,000 and 105,000 lesbian, gay, or bisexual service members.

“We celebrate their successes and recognize the contributions they have brought to our Corps,” the Marine administrative message read, much like similar messages that had been published by the Corps for years. That this was nothing new did not dissuade the outraged.

“Waiting for the old salts to come in and talk shit,” one commenter wrote, to which Yarbrough replied, “Me too!!!” And talk shit, they did.

Related: LGBTQ Vets, Uncomfortable With VA, Look To Each Other For Mental Health Care

There was Dave, who said he never thought he’d see such a thing shared by the Marine Corps: “I’m all for doing your own thing, but for it to be celebrated…wtf, over!!!”

The response from Yarbrough was an uppercut: “We also celebrate Black History Month, Asian Pacific Heritage Month, Month of the Military Child, etc. Should we stop celebrating those too?”

“What in the heck is this about? Is this what the Corps is coming to? A social experiment?” asked Tom, mentioning a common trope used in response to changes in the military.

Wrote Yarbrough: “We still fight wars. Some of our warfighters are LGBT. We like them to know we support them.”

To another, who claimed that Don’t Ask, Don’t Tell, which resulted in more than 13,000 troops being booted from service, had been working fine: “I would imagine all the LGBT that was kicked out of service would disagree,” Yarbrough wrote. “No heterosexuals were kicked out due to sexuality. The policy was terrible and needed to go away.”

One man said he was in before the Marines “pandered to bullshit.”

“You mean pander to human decency?” Yarbrough wrote, just as he had with all the others, signing it with “Respectfully, Chief Warrant Officer Bobby Yarbrough, Communication Strategy and Operations,” though an animated gif of a mic drop may have worked better.

Then there were the barracks lawyers, those with little legal training beyond an unofficial instruction taught on the catwalks outside Marines’ quarters, with one asking how the post wasn’t a political statement.

“How is this political?” Yarbrough wrote. “Plus the commandant has told us to celebrate.”

Another man accused Yarbrough of deleting comments, confusing it as a constitutional issue. “Pretty sad a government organization [whose] main job is to defend the constitution is stomping on free speech,” he wrote. “They better not be deleting anything or they will be catching a lawsuit.”

One urged comments to remain for a different reason: “Hey stop deleting the negative comments. Let us open-minded Marines drag the close-minded ones.”

Still, there was plenty to work with.

John: “The USMC is a train wreck!”

Yarbrough: “How are we a train wreck? Because we respect all those in uniform?”

Geno: “The same reason why the USMC is so fuck up [sic].”

Yarbrough: “It is still better than the grammar in your sentence.”

The original post from MCRD Parris Island had garnered more than 2,700 comments and 2,400 shares by Wednesday, giving it a viral lift that ensured many more Marines would see it.

Now the most popular social media post for Parris Island in June, it also brought plenty of support: “I’m an old salt (damn that hurts to say) and it’s nobody’s business what one’s sexual preference is,” wrote David. “As long as they meet the standard and defend our nation then Semper Fi.”

Days later, the comments returned to normal, as Marine veterans again reflected on their own times at boot camp. Amid a gallery of photos taken this week of recruits firing at the rifle range, many called back on their own experiences from five years ago, 30 years ago, or during Vietnam.

Still, one was upset with the Corps for going soft. A recruit was pictured wearing eye protection, just as most Marines do in training and combat. “What are they going to do next, give them either carpet or a rubber matt to fire from?”

Yarbrough did not answer.

Read Next: High speed, long drags: Meet the Marine Raiders who founded their own cannabis company