Sebastian Gorka criticizes former Defense Secretary Jim Mattis as "not a Marine," despite the fact that Mattis served for 44 years and is definitely a Marine 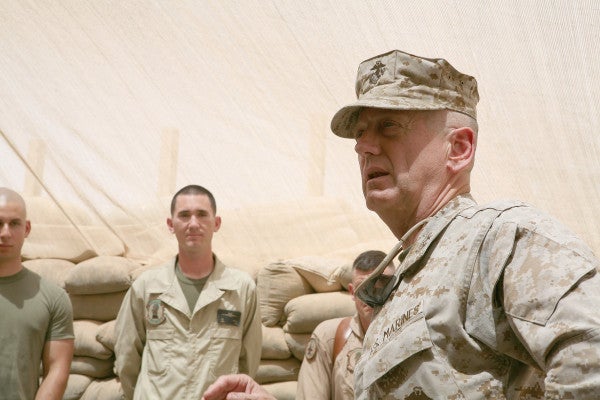 It's been a week since former Defense Secretary James Mattis warned the American people that President Donald Trump's potential deployment of active-duty troops to quell nationwide protests would “make a mockery of the Constitution,” and the president clearly can't let it go.

On Tuesday, Trump retweeted an essay authored by former White House deputy assistant to the president Sebastian Gorka that alleged Mattis was “no Marine”:

Mattis was our Country’s most overrated General. He talked a lot, but never “brought home the bacon.” He was terrible! Someday I will tell the real story on him and others – both good and bad! https://t.co/WgAQMkfgvr

Beyond the obvious hypocrisy here — the commander-in-chief never served a day in the U.S. armed forces in his life — there is another more glaring issue at play: Who the hell cares what Sebastian Gorka, who straight up acknowledges that he's “not a Marine” in his essay, has to say on the matter?

“I'm not a Marine, but I know the Marines,” Gorka opens in his essay, much like the guy who “almost served” in the military.

Here's the thrust of Gorka's argument, per American Greatness:

“Mad Dog” may have worn the uniform of a leatherneck for more years than most, but he has betrayed the values of the Corps by his recent statements about the sitting commander-in-chief. He is no longer one of “the Few, the Proud,” having accused President Trump of somehow violating “the Constitutional rights of . . . fellow citizens” by walking to St. John’s Episcopal Church the day after “peaceful” protestors tried to burn the church to the ground. It’s the same church that every incoming president of the United States has stopped to pray in and show his respects on the morning of his inauguration.

Do I have a right to criticize a man like Mattis? A man allegedly called “Mad Dog” and “Chaos” by his peers? No, I never served in the U.S. military. My only military experience is a few years in the British Army reserves. Once I came to America, however, I twice took the oath of service to my new nation. Once when I joined the Defense Department as a civilian, and then again in 2017 when I joined the White House as a strategist to President Trump.

And even if none of that were true, I would still feel a duty publicly to censure Mattis for a personal reason: because of what I learned from the Marines I have worked for and with over the years. Their love of America and their respect for the truth demand that we react to such reprehensible behavior from a retired general officer who knows better.

Well, Gorka is right about one thing: He absolutely never served in the Marines and therefore should refrain from leveling any sort of assessment of Mattis' role in the organization.

To wit, here are seven reasons Gorka should consider shutting his trap about who is and is not a Marine:

The simple truth is, Gorka doesn't like Mattis' opinion — which is totally fine — and is now attacking the man's service far more than his argument. Mattis is a Marine's Marine, revered by his subordinates and superiors alike, and is a legend in the ranks. And no one, most of all Gorka, can ever take that away from him.

Though Gorka is always welcome to walk into his local recruiting office. The Marine Corps' band is always looking for another blowhard.