The Marine Neo-Nazi Will Likely Be Thrown Out, We Just Don’t Know How Yet

The Marine Corps wants to kick out a neo-Nazi Marine who assaulted protesters during a white supremacist march last year,... 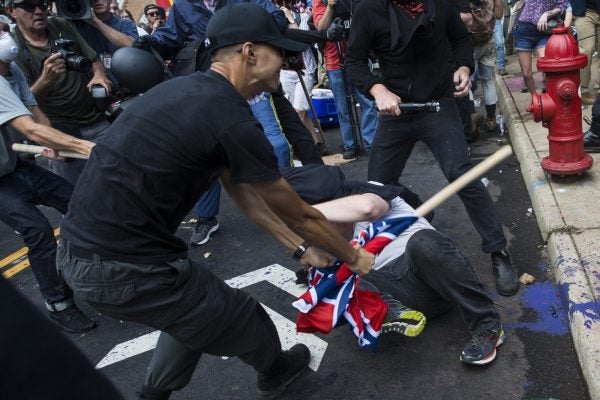 The Marine Corps wants to kick out a neo-Nazi Marine who assaulted protesters during a white supremacist march last year, but the details of his potential exit — including whether he might enjoy VA benefits — are still up in the air.

Lance Cpl. Vasillios Pistolis will be processed for administrative separation after being found guilty at a June 19 summary court-martial of failure to obey an order or regulation and making a false official statement, according to the 2nd Marine Logistics Group. He was sentenced to 28 days of confinement, reduction in rank to E-1, and forfeiture of two-thirds pay for one month.

Interestingly, Pistolis was not charged with assault, despite having reportedly bragged in an online chatroom about attacking a woman at the Aug. 12, 2017, “Unite the Right” rally in Charlottesville, Va. Pistolis' unit announced that he was under investigation after ProPublica reported in May that he was a member of Atomwaffen Division, a neo-Nazi group.

Emily F. Gorcenski told Task & Purpose that she is one of the protesters whom Pistolis assaulted during the rally, but she was not told about his court-martial ahead of time.

“The Marine Corps have not contacted me regarding the issues of Pistolis or any of the other Marines identified by me as having been involved in Unite the Right,” Gorcenski told T&P; on Thursday. “I am unsure to what extent the Corps is delegating investigatory duties to civilian authorities, but I hope that the military would not punt on its duties to protect civilians from all threats, foreign and domestic.”

For Pistolis, what happens next will depend on what type of discharge the Marine Corps seeks for him.

With less than six years of experience, he can be administratively separated by the Corps with an honorable or general discharge and he would not have the right to appeal, said retired Marine Lt. Col. Guy Womack, a military defense attorney and legal expert based in Houston.

But if Pistolis' command recommends that he receive an other than honorable discharge — which would also render him ineligible for most veterans' befeits — Pistolis has an “absolute right” to demand an admin board, at which he could fight to stay in the Marine Corps or request a better discharge characterization, Womack told Task & Purpose on Thursday.

“It's kind of like going to a jury trial,” Womack said. “It would be a panel of three officers who would look at why he is being discharged. It's like a sentencing proceeding. They would know what he had been convicted of, see whatever evidence the government presents that makes him look bad. He would have an attorney with him – one or two – and he'd be able to present evidence on extenuation and mitigation, showing what a good guy he is and the circumstances were not as a bad as it sounds.”

It was not clear on Thursday whether Pistolis had reached a pre-trial agreement with prosecutors, under which he would face a summary court-martial in return for a general discharge.

Because Pistolis faced a summary court-martial, he will not have a criminal conviction on his record whenever he leaves the Marine Corps, Womack said.

“If he goes to apply for a gun permit, runs for public office, applies for a job; when they ask, 'Have you ever been convicted of a crime?' the true answer is no, because he's never had a criminal trial,” Womack said.