The U.S. military has been shifting its focus to preparing for a potential great-power conflict, changing how it uses its... 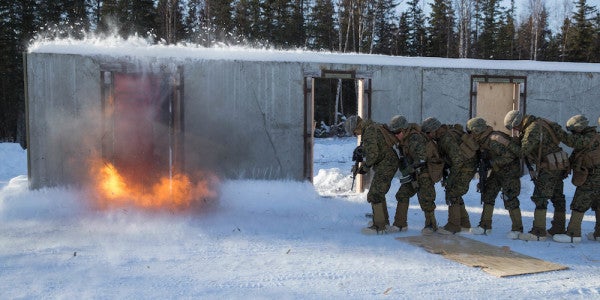 The U.S. military has been shifting its focus to preparing for a potential great-power conflict, changing how it uses its weapons and where it operates. For the Marine Corps, that increasingly means getting ready to fight at the top of the world.

“The Marines are looking at spending a lot more time in Alaska,” Sen. Dan Sullivan, a Republican from Alaska, told reporters on August 8 during a trip to the state with Army Secretary Mark Esper.

The Navy and Marine presence in Alaska is currently small. Some sailors are stationed at Joint Base Elmendorf-Richardson in Anchorage, on Alaska's southern coast. There are also some Marines there, assigned to a reserve unit.

Marines took part in the Arctic Edge exercise in March this year, joining roughly 1,500 soldiers, sailors, and airmen in Alaska “to train military forces to fight and win in the Arctic,” Air Force Lt. Gen. Ken Wilsbach, head of Alaskan Command, said at the time.

Marine Corps Commandant Gen. Robert Neller said prior to the exercise that the Corps was looking for ways to spend more time in Alaska as it seeks more training opportunities in extreme conditions.

A few weeks after the exercise, he told Sullivan during a Senate hearing that Marines “have gotten back into the cold-weather business.”

“We can't assume that we're going to fight in a desert. It's not going to be a temperate climate. It could be in an Arctic climate,” Neller added. “We're moving in the right direction and doing our best to get more deployments for training to Alaska to take advantage of the terrain and the climate.”

The Marine Corps has also sought out cold-weather environments elsewhere.

A rotational force has been stationed in Norway since the beginning of 2017 — the first foreign force stationed on Norwegian soil since World War II. They have carried out training and exercises with Norwegian and partner forces. Norway has requested that the Marines' rotation be extended and that they be based closer to the country's border with Russia.

While visiting the rotational force in Norway at the end of 2017, Neller outlined the change in focus he saw coming, underlining why places like Alaska and Norway are of more interest.

Related: Nearly Twice As Many Marines Could Train In Norway, Despite Threats From Russia »

“I think probably the focus, the intended focus is not on the Middle East,” Neller said when asked by a Marine about where the force saw itself fighting in the future. “The focus is more on the Pacific and Russia.”

“I hope I'm wrong, but there's a war coming,” he said, according to Military.com. “You're in a fight here, an informational fight, a political fight, by your presence.”

The Marine Corps and the Army have both made changes to their gear that reflect that shift in operational focus.

Earlier this year, the Army's 10th Mountain Division went out on winter training operations with new gloves, headgear, socks, gaiters, parkas, and trousers — equipment focused on the “face, hands, and feet,” one member of the unit said.

The Marine Corps has made requests for more caps and gloves for use in intense cold and plans to spend nearly $13 million to equip some units with NATO ski systems.

“No Marine is going to leave here unless they know how to ski,” Neller told Marines in Norway during his December visit.

Sullivan made his comments about Marines spending more time in Alaska during a trip through the state with Esper, the Army secretary.

Esper also underscored the utility of Alaska's location and climate for the military as it prepares for “long-term strategic competitions with China and Russia,” which the the most recent National Defense Strategy report called the “principal priorities” of the Defense Department.

“It doesn't take much to look at the map and understand Alaska's geography with regard to Russia and China … the importance of Alaska in that geo-strategic game,” Esper said during a joint press conference with Sullivan. “Not just geography, but then knowing how to operate function, and, as I like to say, deploy, fight, and win in an arctic environment.”