Thousands of sailors assigned to the Harry S. Truman Carrier Strike Group will return to Naval Station Norfolk this week... 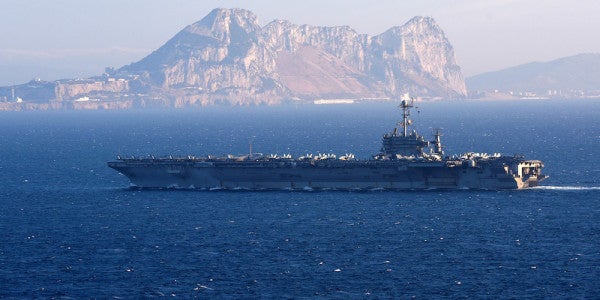 Thousands of sailors assigned to the Harry S. Truman Carrier Strike Group will return to Naval Station Norfolk this week just three months after deploying – part of a defense strategy intended to infuse more unpredictability into how the military operates.

In a statement released Monday to The Virginian-Pilot, Navy Adm. Christopher Grady, commander of U.S. Fleet Forces Command, announced the Truman’s return. While the aircraft carrier, its air wing and a number of other ships in its strike group are returning to its homeport, it is not exactly a homecoming, Grady indicated.

“Let me be clear – all returning units are 100 percent mission-capable and will remain in the sustainment phase of the Optimized Fleet Response Plan, which means they will sustain warfighting readiness and be ready to surge forward or redeploy when called upon,” Grady said in the statement.

The Truman deployed April 11. The Optimized Fleet Response Plan, which the Navy put in action in 2016, seeks to keep carriers to one seven-month deployment every three years. That would have put the Truman’s homecoming date around November if it were to remain underway continuously. But Secretary of Defense Jim Mattis, in testimony before the House Armed Services Committee on April 12, signaled a greater desire for the ability to surprise U.S. adversaries.

“The way you do this is we ensure that preparation for great power competition drives us, not simply a rotation schedule that allows me to tell you three years from now which aircraft carrier will be where in the world,” Mattis testified. “That’s one way to run a shipping line. It’s no way to run a Navy.”

Instead, while a ship and its crew is in the window during which it could deploy, Mattis said they may operate off the coast, perform joint operations or simply stay ashore “and then when we send them out, it may be for a shorter deployment.”

“There’ll be three carriers in the South China Sea today and then two weeks from now, there’s only one there and two of them are in the Indian Ocean,” Mattis testified. “They’ll be home at the end of a 90-day deployment. They will not have spent eight months at sea and we are going to have a force more ready to surge and deal with the high-end warfare as a result without breaking the families, the maintenance cycles or reducing – it will actually enhance the training time.”

Grady acknowledged that the Truman’s return is a “direct reflection of the dynamic force employment concept, and the inherent maneuverability and flexibility of the U.S. Navy.”

Norfolk-based ships that will return this week include the guided-missile cruiser USS Normandy and the guided missile destroyers USS Forrest Sherman and Arleigh Burke.

Fleet Forces spokesman Capt. Scott Miller said he could not provide an exact date for the ships’ return, nor could he predict whether they might again leave, citing operational security.

Miller also added that the Truman’s leadership, Family Readiness Group and ombudsman will work to support families and sailors who may need it.

“It will be a little bit of an adjustment,” he said.

Related: The Pentagon’s Readiness Crisis Threatens To Worsen In 2018 »

Bryan McGrath, who commanded the Bulkeley from 2004 to 2006 and directs The FerryBridge Group, a Maryland-based defense and national security consultancy, called Truman’s shift from an established seven-month deployment, as outlined by the OFRP, an excellent move.

“We turned around and brought it back,” he said. “That is operationally unpredictable.”

Grady said the Truman’s three months operating in the 6th Fleet, which includes much of Africa and Europe as well as the Mediterranean Sea, were “incredibly successful.”

“The ship accomplished every objective established for its crew, from striking ISIS in Syria to expanding partnerships and exercising with our friends and allies,” Grady said.

Photos on social media and military websites showed Truman and the German frigate FGS Hessen, which accompanied the strike group, transiting the Strait of Gibraltar on June 28. More recently, the Truman wrapped up a week in early July training with French naval aircraft in the Atlantic Ocean, according to a Navy news release.

The Truman’s most-recent deployment ended in July 2016 after being extended by a month.