Last March, in his first public testimony after being confirmed as secretary of defense, retired Marine general James Mattis delivered... 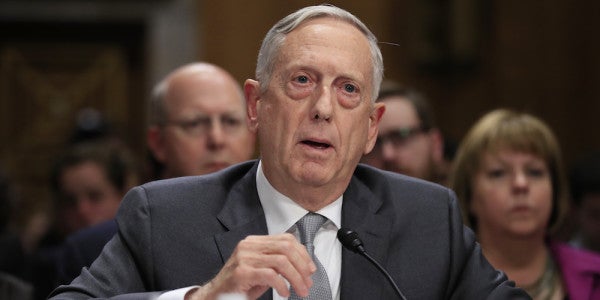 Last March, in his first public testimony after being confirmed as secretary of defense, retired Marine general James Mattis delivered a strong message to lawmakers tasked with overseeing the Pentagon’s budget: The future of America’s forever wars rests in your hands.

“I would take no issue with the Congress stepping forward with an AUMF,” Mattis told the Senate Defense Appropriations Subcommittee on March 22, urging lawmakers to reassert its constitutional role as the federal government’s chief war-making authority with a new Authorization for the Use of Military Force for the multinational campaign against ISIS in Iraq and Syria — a war that has exposed problems with the post-9/11 AUMFs passed in 2001 and 2002 that has served as a blank check for the Global War on Terror for 16 years.

“I think it'd be a statement of the American people's resolve,” Mattis added. “I thought the same thing for the last several years, I might add, and have not understood why the Congress hasn't come forward with this, at least to debate.”

Plenty of war critics agreed with him then — and still do, as concerns over the U.S. military’s footprint have grown in the aftermath of the Oct. 4 Niger ambush that left four Army Special Forces personnel dead. But six months later, Mattis says he doesn’t need a new AUMF — and while he’d still welcome one not to rein in America’s military engagements, but to kick them into overdrive with a full congressional blessing.

Testifying alongside Secretary of State Rex Tillerson before the Senate Armed Services Committee on Oct. 30, Mattis told lawmakers that the 9/11-era congressional war authorizations — which have outlasted many of the politicians who voted for them — “provide safe, sufficient legal authority” to cover neverending campaigns against the Taliban, Al Qaeda, and ISIS, as well as any “associated forces” the president deems a threat — including fighters in the 19 countries where the U.S. military currently runs counterterrorism operations under the 2001 AUMF.

“Though a statement of continued Congressional support would be welcome,” Mattis said, “a new AUMF is not legally required to address the continuing threat posed by Al Qaeda, the Taliban and ISIS.”

In one sense, Mattis has stayed consistent since March: There’s no legal need for an AUMF, but it would be pretty sweet if we had it.

A new “congressional expression of unity, whether or not an AUMF, would present a strong statement to the world of America’s determination… as Sen. Kaine has stated, ‘an important message of resolve to the American public and our troops that we stand behind them in their mission,’” the secretary added, referring to a new draft AUMF introduced in March by Virginia Democratic Sen. Tim Kaine and Arizona Republican Sen. Jeff Flake, both Foreign Relations Committee members who were present for Mattis’ testimony.

Kaine told Task & Purpose he was “encouraged” by Mattis’ apparent support for congressional war action. “I’m in complete agreement with him that it would be a ‘statement to the world of America’s determination’ as well as a strong sign of resolve to the American public and support for our troops,” Kaine said.

But don’t mistake the collegiality for a consensus. The defense secretary has conditions for a new war authorization, and they’re doozies.

Mattis and Tillerson argued to the senators Oct. 30 that no AUMF considered by Congress should put geographical or time limits on military counterterrorism operations — a key feature of Kaine and Flake’s proposed AUMF. “We cannot put a firm timeline on conflict,” Mattis said, adding the U.S. can’t rule out creeping conflicts across new borders: “The enemy does not limit itself based on geographic boundaries the collapse of the ISIS caliphate means it will attempt to burrow into new countries and find new safe havens.”

Mattis also drew a further line in the sand with Congress. After Tillerson suggested in his Senate testimony that the Trump administration would be open to a repeal of the existing AUMF if it came with a new war authorization, Mattis said he didn’t even want to entertain the idea of a repeal without a (broader) replacement.

“Legislation that would prematurely end the AUMF would be inconsistent with a conditions-based approach and embolden enemies who want to outlast us,” Mattis told lawmakers. “There must be nothing that restricts or delays our ability to respond rapidly to terrorist threats to the U.S.”

The reason Mattis gave for such a blank check is the same reason all presidents, Republican or Democratic, have given since the 9/11 attacks. “These are not traditional threats,” he said. “We must be prepared to swiftly engaged this global enemy with our allies and partners.”

Naturally, lawmakers are less than happy with Mattis’ “conditional approval” for a war authorization, or his rationale for it. “It’s not surprising that the administration wants to have less restrictions—most administrations do regardless of party—but it’s our Constitutional duty as a co-equal branch of government to place parameters on the use of military force,” Sen. Tammy Duckworth, a Democrat from Illinois and retired Army lieutenant colonel, told Task & Purpose. “We cannot spend another 16 years engaged in a seemingly endless war conducting military operations in parts of the world that the American public is not aware of and Congress has not approved.”

A firm rejection of geographical or time restraints makes any new U.S. war legislation essentially moot. Hence Mattis’ continued emphasis on the AUMF not as part of the American system of checks and balances, but as a feel-good “message of resolve”: a phony “support the troops” consensus among lawmakers and a status quo that, coupled with political leaders’ increasing deference to Pentagon chiefs, may complicate future efforts by lawmakers to rein in military ops. Mattis may support congressional deliberations over a new AUMF, but based on his and Tillerson’s testimony, any war legislation that meets their conditions is just the Forever War by another name.