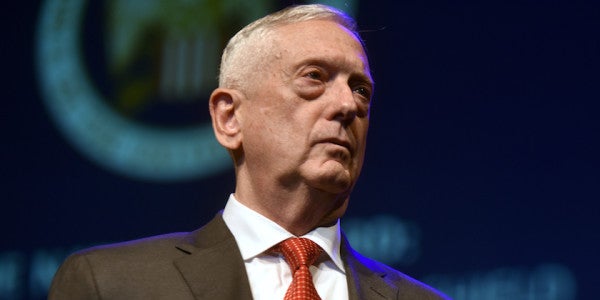 NEW DELHI, INDIA – Despite traveling more than 7,400 miles from the Beltway to New Delhi, Defense Secretary James Mattis cannot escape the inferno of insider politics that is Washington, D.C.

On Thursday, Mattis and Secretary of State Mike Pompeo concluded their first “2+2” meeting with their Indian counterparts, during which both countries signed an agreement that will allow the Indian military to share sophisticated U.S. military communication technologies, established a hotline between the United States and India, and agreed to hold a first-of-its-kind military exercise in 2019 off India’s east coast that will include U.S. and Indian air, land, and sea components.

It was a remarkable day for two countries that had no military-to-military relationship during the Cold War. As normal, Mattis looked weary – he only sleeps a few hours per night – but he showed no outward signs of being under more stress than usual. Like the football player on the Heisman Trophy, Mattis stiff-arms gossip about D.C. power struggles and knife fights so he can get real work done. To call him “stoic” would be an understatement. No matter how tumultuous the world gets, he rarely betrays his emotions.

Meanwhile, speculation is growing at home that Mattis is a lion in winter, whose tenure at the Pentagon may be drawing to a close.

After speaking to reporters on Tuesday, news broke that author Bob Woodward’s upcoming book portrays Mattis as frustrated with President Trump, especially after a meeting about North Korea, when the defense secretary allegedly vented to colleagues that Trump has the understanding of a “fifth- or sixth-grader.” (Mattis has called Woodward’s account “fiction.”)

“I asked him whether or not this was true,” Trump said as he met with Republican lawmakers. “He said: ‘Not only is it not true; I'd like to write a statement.’ I said: ‘Thank you very much. That's very nice.’ He wrote the most beautiful statement. I think he's a terrific person. He's doing a fantastic job as secretary of defense.”

But Washington Post columnist Josh Rogin reported on Wednesday that the White House is already considering replacing Mattis within the next few months. While the president has respected Mattis, a retired Marine Corps general, Woodward’s book has the potential to poison the two men’s relationship, an unnamed White House official told Rogin.

The third punch came when the New York Times posted an opinion piece Wednesday by an anonymous “senior official in the Trump administration,” who claimed that the president’s senior advisers are trying to thwart Trump’s “More misguided impulses until he is out of office.” The story has so outraged the president that he may be less likely to trust his cabinet.

For your slightly jetlagged correspondent, being close to Mattis also means being furthest from the political intrigues back in Washington. As of Thursday, the secretary has not yet talked to reporters about the growing speculation by the media that he and President Trump are at odds. He also still greets yours truly and other journalists with a smile, despite this reporter’s tendency to get under his skin.

Back in April, your friendly correspondent tried to press Mattis on why the Taliban were able to keep staging suicide attacks in Kabul despite the latest security measures.

“What would you suggest?” the secretary asked yours truly.

“People care about what you think, not me,” your friendly narrator responded.

With that, the secretary moved on to another reporter, leaving this reporter alive and wiser.

Before the first story about Woodward’s book hit the internet on Tuesday, Mattis was in his element as he explained to reporters why he and Pompeo were headed to India. “My visit is a firm indicator of what we see as India’s place among our most strategic, and I would even call them ‘consequential’ emerging partners – and not just in the Indo-Pacific region, but in the world – as India steps up to its legitimate role as they see it in the community of nations,” he said in his vintage diplomatic flair.

Clearly, Mattis would rather discuss U.S. strategy for countering great powers, such as China and Russia, than the latest excretions from the Beltway rumor mill. But even here on the other side of the planet, one can look to the west and see a brilliant ball of light on the horizon. That’s Washington, D.C., and it’s burning. No matter where Mattis goes, he cannot escape its hellish glow.

Jeff Schogol covers the Pentagon for Task & Purpose. He has covered the military for 13 years and embedded with U.S. troops in Iraq and Haiti. Prior to joining T&P, he covered the Marine Corps and Air Force at Military Times. Comments or thoughts to share? Send them to Jeff Schogol via email atschogol@taskandpurpose.com or direct message @JeffSchogol on Twitter.