'The only thing time has changed is our ability to manage our grief. It hasn’t eliminated it.' 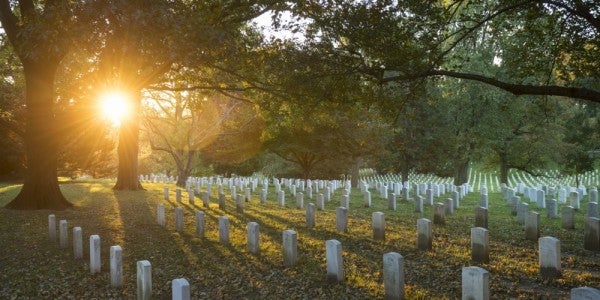 On Memorial Day, Ami Neiberger-Miller will be handing out flowers to families who are going into Arlington National Cemetery.

Her brother, Army Spc. Christopher Neiberger, was killed on Aug. 6, 2007 in Baghdad. For her and countless other families of the fallen, Memorial Day is a reminder of the enormity of their loss.

“While the years have made managing our grief easier in some ways, the reality is that those sad feelings can surge just as strong again now as they did back then,” said Neiberger-Miller, whose brother would have turned 35 years old this year. “The only thing time has changed is our ability to manage our grief. It hasn’t eliminated it.”

Neiberger-Miller is one of the many brave souls whom this reporter has been honored to get to know over the years. As the country prepares to remember its honored dead this Memorial Day, it is important to also remember the families and friends of the fallen whose lives have been irrevocably changed.

Since her brother was killed, Neiberger-Miller has visited his gravesite in Arlington National Cemetery’s Section 60 each Memorial Day. She also helps the Memorial Day Flowers Foundation place flowers at the cemetery to honor the other service members who have died.

Normally, Arlington National Cemetery is so busy on Memorial Day weekend that it can be hard to find some time for quiet reflection, but this year the cemetery is closed to the public and media due to the novel coronavirus (COVID-19) pandemic, she said.

“I have heard of other Gold Star families who are planning to come to the cemetery on Monday who have not been there for a few years, because they value the solitude and quiet,” Neiberger-Miller said.

Tracey Lynn Perez Koehlmoos lives with the pain of losing her husband all the time, but this time of year is particularly difficult for her to endure. On Aug. 27, 2011 Army Col. Randall L. Koehlmoos was killed in a car crash in Jakarta, Indonesia. He had previously deployed to Afghanistan and Iraq.

Memorial Day honors service members who were taken from their families when they were still young and healthy, and that makes their loss all the more painful, said Perez Koehlmoos, who served as national secretary of Gold Star Wives of America from 2017 to 2019.

When asked how she gets through Memorial Day each year, Perez Koehlmoos paused for several seconds before replying: “The truth is, all you have to do is breathe and drink a little water. I try to keep busy.”

For retired Army Col. Mike Jason, Memorial Day puts a spotlight on his feelings of grief. Back in 2014, he wrote a story for the Washington Post about the crush of feelings he goes through during this time of year.

Jason had lost three friends at the time, but since then he has left the Army and become a father. While his sense of loss still comes back each Memorial Day, he also keeps in mind something a chaplain said at the memorial service for one of his soldiers in Afghanistan.

“The pain never really goes away, the sense of loss,” Jason recalled the chaplain saying. “But my hope for you – and I promise you that this will happen – that in time, when you hear their name, the first thing that you will think about is a memory – and maybe a funny memory – and it will bring a smile to your face thinking about that person – rather than agony; rather than the sense of tragic loss.”

Over the years, Jason has come to feel that the meaning of Memorial Day needs to be expanded to honor all those whom this nation has lost, whether it be from illness or suicide. This year, the nation is also mourning more than 95,000 Americans who have died from the coronavirus, including doctors and nurses who gave their lives in the service of their country.

“When do we remember them and acknowledge, really, the families’ losses – and all families?” Jason asked.