Republican presidential candidates for years have easily outdistanced their Democratic opponents when it comes to support among active-duty military. President Donald Trump was among them — until now 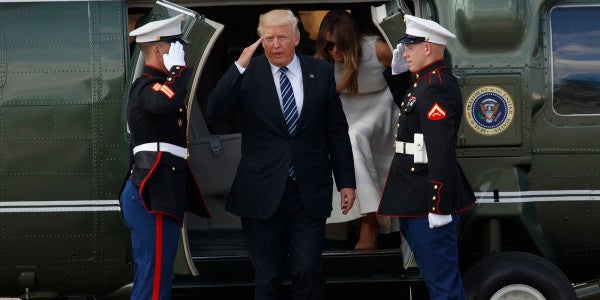 President Donald Trump, followed by first lady Melania Trump, salutes as they step off Marine One for a departure ceremony, Tuesday, May 23, 2017, in Jerusalem.
SHARE

Republican presidential candidates for years have easily outdistanced their Democratic opponents when it comes to support among active-duty military.

President Donald Trump was among them, until now.

A recent poll of U.S. armed service personnel by the Military Times showed former Vice President Joe Biden with a modest lead over Trump. The survey was conducted and released before the controversy erupted last week with the publication of an article in The Atlantic, which quoted anonymous sources who said the president referred to fallen service members as “losers” and “suckers.”

Tension between the commander in chief and military leaders has been evident since before Trump was elected in 2016, in part because of disparaging remarks he has made about some people who served — notably the late Republican Sen. John McCain — and his view of the role of the armed forces.

Trump has not come close to the support among service members enjoyed by previous Republican candidates going back at least two decades, according to pre-election polls by the Military Times.

Despite Trump’s uneasy relationship with military leaders, the most recent survey came as somewhat of a surprise not only because it runs counter to Republican history, but because Trump has boosted defense budgets and pledged to decrease the number of troops deployed overseas — generally two popular policies among the military.

The Military Times said its polls show a steady decline in Trump’s support among troops since he was elected. The new survey, conducted in July and early August, showed that about half of the active-duty members polled — 49.9 percent — had an unfavorable view of Trump, while 38 percent had a favorable view.

That essentially flips the numbers from a poll the publication ran at the start of Trump’s presidency: 46.1 percent favorable, 37 percent unfavorable.

The recent poll, conducted in conjunction with the Institute for Veterans and Military Families at Syracuse University, surveyed 1,018 active-duty troops and had a margin of error of up to 2 percent.

The Military Times pointed out a distinction between the views of officers and enlisted personnel.

“Enlisted views of Trump’s performance in office have consistently been more favorable than those of officers in the poll over the last four years,” the Military Times wrote.

The publication noted that despite the decline, Trump’s popularity was higher than that of former President Barack Obama, who had a 36 percent favorable rating and 52 percent unfavorable rating in January 2017.

In the new poll, Biden was favored by 41.3 percent of active-duty military with Trump supported by 37.4 percent, while 12.8 percent backed a third-party candidate.

In a May 2016 Military Times poll, Trump held a more than 2-1 lead over Democrat Hillary Clinton among the troops. Yet his 54 percent support was considerably less than his GOP predecessors: Mitt Romney in 2012 (66 percent), McCain in 2008 (68 percent) and George W. Bush in 2004 (72 percent — that poll was taken about a year and a half after the U.S. invaded Iraq).

In an analysis of those polls, the Quartz news organization said the Military Times cautioned about making direct comparisons because the polls used different methodology.

Nevertheless, it appears that Trump has had less support among armed service personnel than the other Republicans, even if the exact numbers may be in question.

Trump may be supportive of the military in general, as his budgets suggest, but he has a history of publicly criticizing leaders and specific veterans.

As recently as Monday, he said Pentagon leaders “want to do nothing but fight wars so that all of those wonderful companies that make the bombs and make the planes and make everything else stay happy.”

His feud with McCain, a Vietnam War POW, was thrust into the spotlight when Trump was campaigning for president in 2015.

The following year, he lashed out at retired four-star Gen. John Allen. “You know who he is? He’s a failed general. He was the general fighting ISIS. I would say he hasn’t done so well, right?” Trump said, according to Politico.

He once had high praise for his former Defense Secretary James Mattis, a retired four-star Marine general, but not after he left the administration, when he called Mattis “the world’s most overrated general.”

Mattis was among several retired top military leaders to criticize Trump’s handling of the protests triggered by the death of George Floyd while in Minneapolis police custody in May. They were particularly troubled by Trump’s threat to deploy the military to subdue the protests.

In addition to those clashes with prominent retired generals and admirals, Trump has had awkward moments regarding lower-ranked service members.

In October 2017, Myeshia Johnson received a condolence phone call from Trump about her husband, Army Sgt. La David Johnson, who was killed in an ambush in Niger. She said Trump made her cry because he could not remember her husband’s name.

The president disputed that, along with other things he was reported to have told her.

Trump also denied the comments attributed to him in the Atlantic article, though reporters from other news organizations, including a Fox News correspondent, have confirmed various aspects of the story.

Whether Trump’s ongoing conflicts with the U.S. military will have a measurable effect on the election probably won’t be known until voter exit polls are released in November, if then.

Presidents have sharply disagreed with military leaders in the past. Perhaps the best-known case was in 1951, when President Harry S. Truman relieved the highly popular Gen. Douglas MacArthur of command during the Korean War amid a public confrontation over strategy.

In 1961, President Dwight Eisenhower expressed concern about the growth of the “military-industrial complex.”

Regardless, it’s unheard of in modern times for a president in the stretch run of a re-election campaign to be at such public loggerheads with current and past military leaders.