When Brandon Russell joined the Florida Army National Guard in January 2016, the service noted the radiation-warning symbol tattooed on … Continued 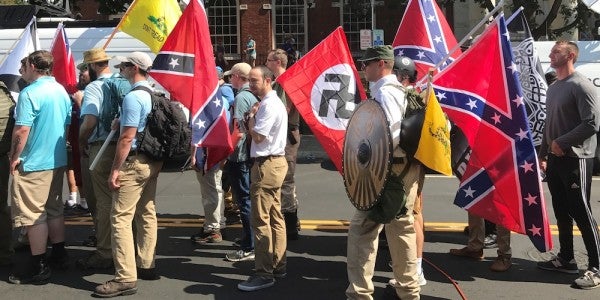 When Brandon Russell joined the Florida Army National Guard in January 2016, the service noted the radiation-warning symbol tattooed on his right shoulder.

No one saw it as suspicious. Seventeen months later, it figured into the slaying of two young men, a federal explosives case and investigations into the prevalence of neo-Nazis in the military.

In May 2017, Russell’s two Tampa Palms roommates were shot dead and a third roommate was arrested in the slayings. An investigation revealed that Russell was the leader of a neo-Nazi organization called The Atomwaffen Division and his roommates all were members.

The investigation also revealed that Russell was making bombs.

One of the emblems of Atomwaffen, German for atomic weapons, is the radiation warning symbol — three pie-slice shapes pointing to a circle in the middle.

The military has conducted at least two investigations into Atomwaffen membership, one involving Russell and one a Marine in North Carolina.

Russell’s reserve command, the 53rd Infantry Brigade Combat Team in Pinellas Park, found no evidence he was espousing his hateful beliefs when it wrapped up an investigation a year ago. But the investigator recommended creating a database of tattoos to help weed out white supremacists in the enlistment process.

“My investigation would have been able to identify any other Soldiers who were in-processed … with a radiation symbol tattoo,” Demorest said.

A year later, no such database exists in the Army or Pentagon.

Experts who track hate groups disagree on whether a tattoo database would help.

Not having one is a mistake, said investigator Heidi Beirich with the Southern Poverty Law Center, because tattoos are “the easiest way to ID racial extremists.”

“They might not cop to having these ideas but the tattoos tell the tale, ” said Beirich, whose organization tracks hate groups like the Atomwaffen Division.

But while tattoos are helpful, a database might not be because symbols are easily changed, said Carter F. Smith, a former investigator and manager with the Army’s Criminal Investigations Division and now a professor at Middle Tennessee State University.

“The existence of a database would cost tons of money and lose value almost as soon as it was completed,” said Smith, author of Gangs and the Military.

“The challenge,” she wrote in her report, “would be maintaining the system if soldiers get additional tattoos.”

In this photo taken Friday, Aug. 11, 2017, multiple white nationalist groups march with torches through the UVA campus in Charlottesville, Va.Photo via Associated Press

Russell, 22, is serving five years at a federal prison in Georgia after pleading guilty earlier this year in U.S. District Court in Tampa to two federal bomb-making charges.

Authorities first encountered Russell while investigating the May 19, 2017, shooting deaths of roommates Andrew Oneschuk, 18, and Jeremy Himmelman, 22. The third roommate, Devon Arthurs, 19, is awaiting trial in the slayings. Investigators say Arthurs told them he fired the fatal shots to keep the other young men from committing domestic terrorism.

Russell was not charged in the deaths but in searching his belongings, investigators found icons of white supremacy — Adolf Hitler’s Mein Kampf, the apocalyptic novel The Turner Diaries, and a framed photo of Timothy McVeigh, the former National Guard soldier and white supremacist executed for detonating the truck bomb that killed 168 people in 1995 at the federal building in Oklahoma City.

After Russell was arrested, his commander wanted to know how big a problem he and his ideology represented.

Capt. Demorest said it was her belief that Russell was not actively recruiting nor did he display “consistent characteristics that would have led a reasonable person to suspect PFC Russell held such radical beliefs.”

No soldiers interviewed were able to recall Russell espousing neo-Nazi views, Demorest said. She also noted his clean police record at enlistment, his short time in uniform and his “weak social skills” as reasons no one suspected he was a neo-Nazi.

He was considered “socially awkward and quiet” and the only soldier he talked to often was black.

Russell did cause problems with his criticism of homosexuality and his superiors counseled him on “how it is unacceptable to vocalize hatred towards another group, race, or sexual orientation in the military.”

In addition, Russell expressed a strong interest in obtaining body armor and keeping his military issued gear. When authorities first encountered him, he was wearing his uniform and he was arrested later while traveling with two rifles and 500 rounds of ammunition that he had purchased.

The bottom line, the investigator found: Russell’s unit and the Florida Army National Guard were not negligent in failing to recognize him as a potential threat “since tattoo records are not closely maintained” and he wasn’t around long enough to exhibit any patterns.

Related: Leading US Neo-Nazi Turns Out To Be A Military Faker »

The percentage of the nation’s 2.2 million troops who are members of hate groups is likely minuscule, analysts say. But a 2017 Military Times survey of more than 1,100 active-duty service members found nearly 25 percent reported seeing examples of white nationalism among fellow troops. More than 40 percent of non-white service members surveyed reported experiencing white nationalism in the military.

The issue remains a concern to hate-group watchers like Beirich and Carter because of the high levels of training troops receive. They point to Brandon Russell and another case involving a service member with ties to the Atomwaffen Division.

The Naval Criminal Investigative Service is looking into allegations that Marine Lance Cpl. Vasillios Pistolis took part in a violent attack during an August 2017 white-supremacist rally in Charlottesville, Va. The investigation was launched after ProPublica and Frontline reported that Pistolis bragged about helping beat a woman from Charlottesville who came to protest the rally.

Pistolis is still serving in the Marines pending results of the investigation, the Marines said.

“There is no place for racial hatred or extremism in the Marine Corps,” said Maj. Brian Block, a spokesman.

The report also prompted a request for information from the Pentagon by U.S. Rep. Keith Ellison, D-Minnesota: The number of reports of extremist activity by service members over the past five years, the number of full investigations conducted, the number of troops disciplined for extremist actions or ties, and steps being taken to screen recruits.

Ellison asked for a response by May 21. As of Thursday, the Pentagon still was working on it, said Air Force Maj. Carla Gleason, a Department of Defense spokeswoman.

But the Pentagon has no tattoo database or any other way of tracking people who belong to extremist groups, Gleason said.

“Mere membership is not precluded,” Gleason said. “The policy is a delicate balance between constitutional freedoms of speech, associations and military requirements.”