Stressed out about passing your PT test? The Air Force has got you covered. 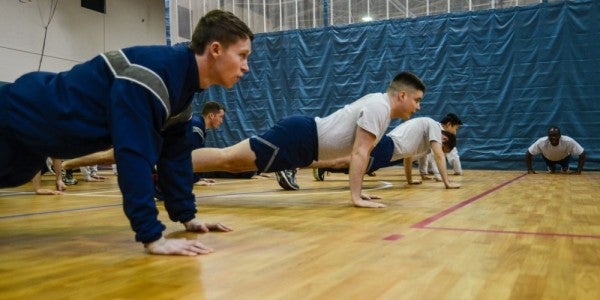 The topic of this week's opus is physical fitness, and that is laughably ironic considering this reporter could never meet any of the military services' height and weight standards. (Your humble narrator once considered opening a restaurant called “Pvt. Pyle's Forbidden Fruit,” which would only sell jelly donuts.)

As you beloved readers likely already know, at least 31 percent of Americans between the ages of 17 and 24 are too overweight to serve in the military. For those young men and women who are physically fit enough to enlist or get commissioned, the rigors of initial training are only the first hurdle.

Once in the military, service members must regularly pass physical fitness tests, and as the Defense Department prepares to fight big wars again, some of the services have made their physical standards more demanding.

In recent years, the Marine Corps has raised the minimum score needed to pass the Corps' physical and combat fitness tests, reduced the time Marines get to rest in between events, and required female Marines to do pull ups to get the maximum score on their PFT. Meanwhile, the Army is transitioning to an age- and gender-neutral combat fitness test with six events – twice as many as the current Army Physical Fitness Test – that are meant to better prepare soldiers for combat tasks.

The physical and combat fitness tests standards are challenging enough, but service members face the added stress of worrying that their careers could be hurt or even ended if they fail. (If you want to know what failing looks like, check out this video of your friend and humble narrator attempting the Army's PT test in 2011.)

Air Force personnel officials are looking into giving airmen the option to retake their PT tests within their cycle, similar to the Navy's “Bad Day” policy, said Wright's spokesman Senior Master Sgt. Harry Kibbe. If they pass, the failed test would no longer count.

The changes under consideration are in no way an attempt to make the Air Force's PT test any easier to pass, Wright told Task & Purpose.

“That's not what this is about,” Wright said. “The potential change for 'Second Chance' is meant to relieve some of the anxiety that airmen may face when preparing for the physical fitness test. We're not looking at changing the test itself at this time. There's a study going on that will give us data for potential changes to that.”

Now, some of you may be chuckling about the Air Force's efforts to reduce the stress of taking the PT test because the service is not as synonymous with physical fitness as the other military branches – with the possible exception of the Navy.

To wit: The service has been mocked as the “Chair Force;” Gen. Curtis LeMay was not exactly svelte; and an Air Force military training instructor was roasted on social media after claiming in a 2009 recruiting video that Air Force trainees are “in better shape than most Marines” by the time they become airmen.

As a counterpoint, it's worth remembering that Air Force special operators are particularly bad-ass, especially Medal of Honor recipient Tech Sgt. John Chapman.

This reporter applauds the Air Force's efforts to giving airmen a second crack at passing their PT test. Now can someone please explain why the service has its own heavy metal band, Max Impact? Metallica and Megadeth didn't write songs about enlisted professional military education.