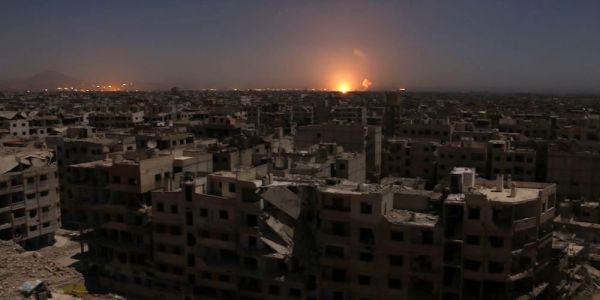 An incendiary report that North Korea has been providing Syria with material that could be used to make chemical weapons marks the merging of a pair of dangerous storylines involving two of the world’s prime powder kegs.

But North Korea and Syria, each led by a dictator who has repeatedly defied the West when it comes to banned weaponry, have a decades-long history of military ties, unbroken and perhaps even enhanced by the pariah status attained by each government over the years.

The findings of United Nations experts cited in a New York Times report are consistent with well-documented past practices of both governments in evading international controls via intricate smuggling networks, analysts said.

The unpublished UN report details 40 shipments of prohibited missile parts and materials from North Korea to Syria between 2012 and 2017, including acid-resistant tiles, valves, and thermometers, according to the newspaper. North Korean missile technicians have also reportedly been seen working at weapons facilities inside Syria.

“It’s scary that these regimes have crossed these red lines and there’s been no real success in stopping them,” said analyst Jay Solomon of the Washington Institute think tank, who has written extensively about links between the Syrian and North Korean governments.

Related: The Trump Administration Is Ready To Keep US Troops In Syria For A Long Time »

The latest UN report, as detailed by The New York Times, broadly correlates with tactics the world body’s investigators have previously uncovered in monitoring international sanctions, Solomon said. Those include use of an “incredibly sophisticated” network of shell companies, financial feints and cyber-sown diversions to evade sanctions, he said.

At the moment, both Pyongyang and Damascus are viewed as serious threats to stability in their respective regions and beyond.

North Korea is engaged in the seemingly inexorable pursuit of nuclear weapons capable of menacing the United States, and Syria’s civil war continues to unleash fresh barbarities even as the conflict is poised to enter its eighth year.

In both countries, the scions of repressive dynasties — North Korea’s Kim Jong UN and Syria’s President Bashar Assad — have repeatedly demonstrated a willingness to impose enormous suffering on their own people, who diminishes the power of international sanctions to rein them in, observers noted.

Flames following a reported rocket attack is seen on the horizon in the rebel-held enclave of Eastern Ghouta on February 28, 2018.

The report comes after accusations from pro-opposition activists in Syria that government forces recently deployed chlorine gas in Shayfoniyeh, a town in the suburban Damascus enclave of eastern Ghouta, after an airstrike in which victims exhibited symptoms including eye irritation and breathing difficulties.

Assad’s government has long denied using any chemical weapons, though it stands accused of using sarin gas in Ghouta in 2013. That attack brought the U.S. to the brink of attacking Damascus until an eleventh-hour deal struck with Russia saw Assad give up his chemical weapons arsenal.

Recent history suggests that both Kim and Assad believe they can continue to act with impunity, counting on the competing interests of powerful outside actors like the United States and Russia to impede unified action against them.

State Department spokeswoman Heather Nauert said Tuesday that the United States has “had concerns for a long time “ about the possibility of North Korea providing chemical weapons components to Syria, although she said she had not seen the UN report and could not comment on it directly.

As North Korea’s government becomes “more desperate,” Nauert said, it will look for “different, creative” means of funding what she called its “criminal regime.” If the account of activities detailed in the UN report are true, she said, “it shows the depravity of the regime.”

The UN investigators’ reported findings underscore a dual danger: Illicit shipments from North Korea could allow Syria to maintain and shore up a cache of chemical weapons, while North Korea gets a badly needed infusion of cash to continue racing toward its nuclear and ballistic goals.

Since taking office more than a year ago, President Trump has met North Korean threats and bombast with fiery rhetoric in kind, but American demands for denuclearization — a U.S. precondition for potential talks, dangled by the North as the Olympic Games wrapped up on Sunday — are widely considered likely to be futile.

Dating back to relatively early in the Syrian conflict, Assad has been accused of using chemical weapons against civilians trapped in rebel-held areas. Despite a retaliatory U.S. strike ordered by Trump in 2017, international reaction has been largely confined to diplomatic hand-wringing.

According to the UN report, written by a panel of experts studying North Korean complaints about sanctions, North Korean missile technicians have been seen at known chemical weapons and missiles sites inside Syria, the New York Times said. The United Nations has not publicly commented on the findings.U

The UN report stopped short of claiming definitive proof of current collaboration between North Korea and Syria on chemical arms, but it represented the most exhaustive accounting to date of efforts by the two governments to evade and flout sanctions meant to halt such cooperation.

Syria has periodically sought to appease the international community on the subject of chemical weapons. In what is now widely viewed as a bid to stall for time, Damascus agreed to a Russian plan in 2013 to give up its chemical stockpile.

Pointing to the urgency of the unfolding crisis in eastern Ghouta, some advocacy groups called for the U.N. report’s release to put pressure on the Assad government.

“The UN should publish its report,” Lynn Malouf, the director of Middle East research for Amnesty International, said in a statement. If the report is accurate, she said, “it would represent an ominous marker of how far the crimes and violations committed by the Syrian government have eroded respect for long-established prohibitions.”