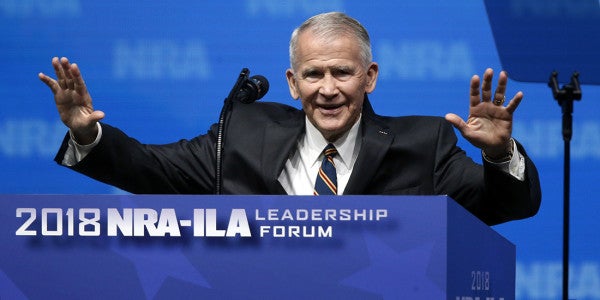 Say you're the largest lobbying group in the history of lobbying groups. Sure, your paid membership only accounts for 3% or 4% of all America's estimated 140 million or so gun owners, but you are the undisputed loudest voice on firearms in America — serving industry manufacturers, lobbying legislators, and setting the agenda for concerned gun enthusiasts… even as you fight allegations that you hate schoolkids, lie and manipulate a lot, take foreign money for your star-spangled cause, and intimidate or talk past opponents rather than attempting to engage them.

It's time for the membership to pick a new president. Who can possibly navigate your lobby group through this minefield?

Related: Dude, Where’s My Gun Culture? In Search Of Chill At The NRA Annual Meeting »

How about a former Marine who was convicted for secretly selling arms to the dreaded Islamic regime in Iran in order to finance an illegal war in Central America?

Who, after his conviction was overturned on a technicality, ran for Senate and was humiliated by his former fellow Marines in the losing effort?

Who, in search of new grifts, started a conservative charity that got accused of misusing funds after he hired the guy who raised money for his legal defense after the Iran thing?

Who just recently joined up with the founder of Blackwater, who recently lied his ass off to Congress about his involvement in the Trump-Russia affair, to pitch a non-government, Tom Clancy-style spy agency that they could run?

This is just perfect. Oliver North — of Iran-Contra fame — who, according to sources, recently pitched the Trump administration on a private global spy network with Blackwater's Erik Prince, will be the new leader of the @NRA. https://t.co/dqpnxQi0cz https://t.co/cPGkgTHRkT

Let's elect him president of the National Rifle Association.

Maybe it's to own the libs. Or maybe it's just a fuck-you to Jim Webb. Either way, the NRA wins and sane gun owners lose. As always.