During his confirmation hearing in January, Secretary of Defense James Mattis vowed that the Department of Defense would take the … Continued 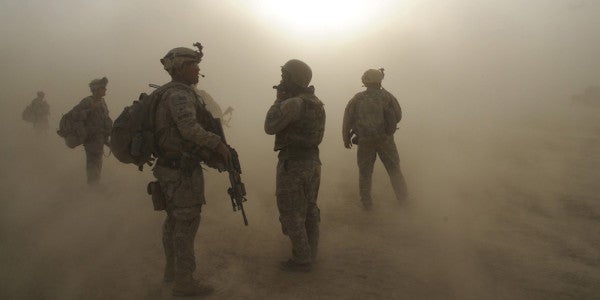 During his confirmation hearing in January, Secretary of Defense James Mattis vowed that the Department of Defense would take the national security challenges posed by climate change seriously, despite the President Donald Trump’s well-documented skepticism on the matter. But a new government report suggests the Pentagon isn’t taking all the necessary steps to address climate’s impact on readiness worldwide — and the delay may be rooted in a delicate dance by DoD officials to reconcile its security concerns with the White House’s firm opposition to mainstream climate research.

The report, published by the Government Accountability Office earlier this month, found that the Pentagon “does not consistently track the impacts’ estimated costs,” even though “operational risks (including interruptions to training, testing, and missions) and budgetary risks (including costs of repairing damages) are linked to these impacts.” According to the report, the DoD deploys flawed survey methods, evaluates military installations inconsistently, and is slow to adopt climate-related data into its planning and engineering. In short: the DoD has talked a big talk about climate change, but hasn’t yet figured out how to walk the walk.

“The science attributing these events to climate change is not supported”

Sure, the Pentagon is a sprawling bureaucracy and it takes forever for things to get done, let alone done right. But the most alarming morsel in the GAO report is the DoD’s official response: While it partially agreed with several GAO recommendations, it rejected some major ones, declining to screen bases for climate-related vulnerabilities “to systematically track the costs associated with extreme weather events and climate change” on those installations.

Why? Lucian Niemeyer, former Air Force officer and current assistant defense secretary of for energy, installations, and environment, responded in the report that “the science attributing these events to climate change is not supported by previous GAO reports.”

Data from the 2014 National Climate Assessment shows that
rising seas present a host of risks to at least 18 installations across the U.S. eastern seaboard.Map via Union of Concerned Scientists

Whoa, what? That sounds, on its face, like a denial that climate change causes extreme weather, despite oodles of government research to the contrary. And it’s an especially strange statement from the DoD, considering that the 2018 defense-budget bill that President Trump recently signed into law emphatically stated that climate change “will threaten the operations of more than 128 United States military sites, and it is possible that many of these at-risk bases could be submerged in the coming year.”

(A Pentagon spokesman declined to elaborate on Niemeyer’s remarks on the GAO report. “The response says what the response says,” the spokesman told Task & Purpose. “That’s DoD’s official response.”)

The delicate climate dance between Pentagon and the White House

Niemeyer’s comment also doesn’t jibe with Mattis’ January remarks that climate-related phenomena “impact our security situation” and that his DoD was “prepared to address the effects of a changing climate on our threat assessments, resources, and readiness.” But more than a tension between leaders in E-ring, the disparate statements suggest that the Pentagon’s trying hard to strike a balance between its own steadily increasing embrace of climate science over the years, and the Trump administration’s full-court press against climate-change regulations.

And press, the administration has. The National Security Strategy presented to Congress by Trump this week completely dropped climate change from the nation’s list of national security priorities — outside of some namby-pamby language about reducing “traditional pollution.”

While Niemeyer’s GAO response indicated that the DoD is currently “revising” that directive, a Pentagon spokesman hinted last September that the DoD would continue focusing on the threat of climate-caused extreme weather, regardless of the politics around the issue. “As Secretary Mattis has said, the department evaluates all potential threats that impact mission readiness, personnel health and installation resilience, then uses that information to assess impacts and identify responses,” Pentagon spokesman Lt. Cmdr. Patrick Evans told Military Times in September. “The effect of a changing climate is one of a variety of threats and risks, but it’s not a mission of the Department of Defense.”

Translation: We don’t care about the why of natural disasters, just the what, and we won’t stop preparing for extreme weather. Sure, it’s a weird game of linguistic gymnastics, but it gives the Pentagon wiggle room to look at the national security impacts of climate change — in other words, its job — regardless of the political climate at home.

It seems likely that DoD’s official response to the GAO report is not an about-face: Rather, it’s a strategic dodge designed to keep the Pentagon focused on preparing for both the man-made and natural threats facing America. And while the GAO report is right to point out how hampered the DoD is — as always — by organizational and bureaucratic challenges, it also suggests that Mattis is making good on his promise, despite the political obstacles that may lie ahead in 2018.