We live in the Bizarro universe where disinformation is the coin of the realm. 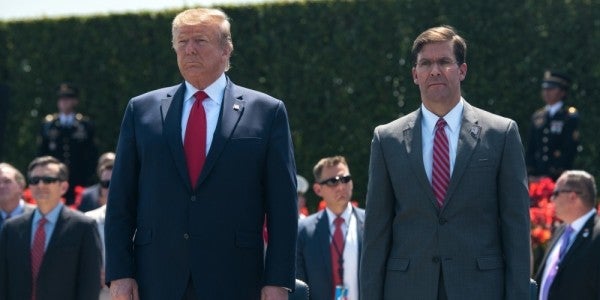 The Pentagon has a credibility problem that is the result of the White House's scorched earth policy against any criticism. As a result, all statements from senior leaders are suspect.

We're beyond the point of defense officials being unable to say for certain whether a dog is a good boy or girl. Now we're at the point where the Pentagon has spent three days trying to knock down a Wall Street Journal story about possible deployments to the Middle East, and they've failed to persuade either the press or Congress.

The Wall Street Journal reported on Wednesday that the United States was considering deploying up to 14,000 troops to the Middle East to thwart any potential Iranian attacks. The story made clear that President Trump could ultimately decide to send a smaller number of service members, but defense officials have become fixated on the number 14,000 as if it were the only option on the table.

“As the department has stated repeatedly, we were never discussing or considering sending 14,000 additional troops to the Middle East,” Defense Secretary Mark Esper said in a statement on Friday. “Reports of this are flat out wrong. DOD will always stand ready to respond to future actions by our adversaries if and when they arise, but the Pentagon is not considering sending 14,000 troops to CENTCOM. This report is false.”

In normal times, that would end any debate about the story's accuracy, but we live in the Bizarro universe where disinformation is the coin of the realm.

That's because the White House has perfected the strategy of claiming that every news story it does not like is an outright lie. Trump attacked the story's credibility on Thursday, tweeting, “The story today that we are sending 12,000 troops to Saudi Arabia is false or, to put it more accurately, Fake News!”

First of all, this reporter loathes the phrase “fake news,” which is the first refuge of the rogues and scoundrels known as elected officials. The president has successfully called “fake news” countless times during his tenure, but he has also created an environment where every denial must be greeted with a degree of skepticism. Indeed, when former Navy Secretary Richard Spencer disputed a New York Times report that he had threatened to resign, Esper later said Spencer had in fact indicated he would step down. Womp womp.

Before we go any further, I need to make clear that I respect both Esper and Army Gen. Mark Milley, Chairman of the Joint Chiefs of Staff, both of whom have made serious efforts to be more open with the media. They are well served by a number of overworked public affairs officers who work around the clock to provide maximum information to reporters with minimal delay. One of those professionals is Pentagon spokeswoman Alyssa Farah, who was the first Pentagon official to comment on the reported planning for troop deployments.

But – fairly or unfairly – they are painted with the same brush as the White House. So when Farah initially tweeted on Wednesday that the Wall Street Journal story was wrong, the Pentagon's word was simply not enough for two Republican lawmakers who skewered Undersecretary of Defense for Policy John Rood the next day.

When Rood appeared to confirm that the Pentagon was considering deploying up to 14,000 troops to the Middle East, Sen. Joshua Hawley (R-Mo.) accused Farah of misspeaking and demanded a public explanation from Esper.

The Pentagon has consistently objected to the 14,000 figure in the Wall Street Journal story. Other media outlets have reported that the number of troops deployed could be between 5,000 and 7,000.

However, your friend and humble narrator was in this very building for the Iraq and Afghanistan surges and in both cases the actual number of troops deployed was much higher than the figure originally announced.

As old hares know, there's a long tail behind each tooth, so the pending Middle East deployment will end up including numerous supporting elements, which the Pentagon may or may not reveal.

It's entirely possible the Defense Department could announce the president has authorized deploying 7,000 troops, and then ships, logisticians, or aviation units could be sent later, bumping up the total number of service members involved to 14,000.

But on a personal note, your friend and humble narrator knows both reporters who wrote the Wall Street Journal story. They are seasoned professionals and I trust them. You should too.