The Post-9/11 Generation Of Vets Is The Most Diverse In History. Here’s Why That Matters

New Census Bureau figures show the post 9/11 generation of veterans is the most diverse in history, helping to erase... 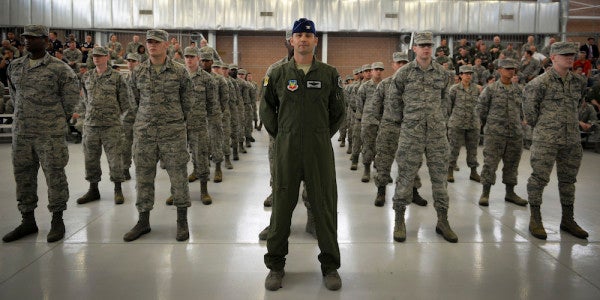 New Census Bureau figures show the post 9/11 generation of veterans is the most diverse in history, helping to erase some of the stereotypes of the past.

“I still get a lot of people that look at me in shock, like, ‘you were a veteran?’” said Ericka Carter, 36, of Dayton, Ohio, an African American woman and an Army veteran.

Nearly half of those who served after 9/11 are under the age of 35. Of that group, 17 percent are women, 15.3 percent are African-American and 12.1 are Hispanic, according to the Census.

At 3.3 million, they number nearly half the size of the population of Vietnam veterans.

Many had multiple deployments to Iraq and Afghanistan, another distinction set apart from previous generations who may have had to ship off once to war.

Some 46 percent have some college education, while 32 percent have a Bachelor’s degree or higher, the Census data shows.

“There were moms who joined right after 9/11 happened because of their call to duty,” said Amber Meyer, 34, of Huber Heights, who enlisted in the Army and became a logistics specialist and deployed to Iraq and Afghanistan.

They joined for different reasons: To find a job, get money for college, to serve in uniform, or all three, veterans say.

“For me, it was doing something different,” said Danielle Cardin, 27, a nursing student at Wright State University and a former Air Force medic from the Chicago area. “It was getting out of my hometown doing something with a better purpose.”

The military has overcome many barriers since President Harry S. Truman desegregated the armed services in 1948. A ban on gay men and lesbians serving openly was dropped in 2011 and more recently, the Pentagon announced in 2015 it would open all combat jobs to women, including infantry and Special Forces.

“The military has always been at the forefront of creating diverse environments of desegregation, and it’s not always been a smooth process,” said Seth Gordon, director of the Veteran and Military Center at Wright State University. “There’s a long history of units of color being denied the opportunity to do certain things and being granted the opportunity and then excelling beyond most persons’ expectations.”

Even with more diversity in the ranks, some service members faced discrimination in uniform.

At her first duty station out of training at Fort Hood in Texas to be an Army mechanic, Carter said she encountered gender and racial prejudice when a supervisor refused to issue a toolbox.

“Being an African-American woman mechanic was definitely difficult and great all at the same time because I got to expand boundaries and, I like to say, prove everybody wrong,” she said. “I wasn’t shy, I wasn’t timid.”

Even so, many obstacles stayed in place.

“I went up the chain of command like I was supposed to, and (the supervisor) was retiring so they just let him do what he wanted to do,” said the California native, eventually transferring to an ID card station. “For a while, I cried, I was scared, but after a while, I got over that and I continued on a mission to be a really good soldier and I figured out how to do that.

“It was eye-opening and real,” she added. “However, I do think that I most definitely changed, or I hope that I changed, some people’s views going through that because they definitely started to warm up and be nicer.”

For others, serving meant seeing everyone in uniform the same way, Morse said.

“From my perspective, I was a bit color blind in the sense that the military offered me a unique point of view of everybody was the same,” said Morse, who was stationed at Hill Air Force Base in Utah after boot camp. “We all wore the same uniform. We were all addressed by rank. Your status wasn’t determined by your ethnicity or your race. Your status was determined by your rank.”

‘It was very painful’

Deploying overseas has always led to challenges at home, but the number of deployments and number of service members with families being deployed meant more separations from loved ones.

Meyer, a Dayton native, deployed as an Army logistics specialist to Iraq, came home to start a family, and then deployed to Afghanistan.

Leaving a young child behind the second time she deployed “was probably one of the hardest things I’ve had to do,” she said. “It was very painful. But luckily for me, my family was able to help me take care of my child and keep the contact between us.”

Service members who are married to another service member often have additional family separation issues.

Loghan Young, 29, and Joseph P. Young, 34, both Army veterans who live in Dayton, have four children between them and know the rigors of family demands while deployed.

“I think it’s difficult,” said Loghan Young, who was a lead convoy driver in Afghanistan. “You see more people that have a lot of child care issues and communication issues with their family because it’s not necessarily the military’s fault because we have a job to do, but I think the military is hard on families.”

The couple, who met at a recruiting station, deployed together for six months in Afghanistan.

“It made it easier and it made it harder in some ways,” said Joseph Young, a former security forces soldier.

“Everyone in our unit was pretty understanding, pretty open, but at the same time you can feel some tension some days,” he said. “It was a little different seeing my wife roll out into possible danger.”

‘I think everybody has been impacted’

With the U.S. engaged in so many conflicts around the world — one U.S. service member was killed in Somalia Friday, while four others were injured — the post 9/11 generation stands out for another reason: 36.1 percent have service-connected disabilities, the highest among all veteran groups, according to the Census.

In 2016, over a third of post 9/11 veterans were enrolled in VA health care and 6 percent were without health insurance.

“I think everybody has been impacted a little bit,” Meyer said. “How do you go to war and not be impacted in some way? I know not all wounds are visible and a lot of the Census is probably reflecting the invisible wound as well.”

Veterans are more knowledgeable about services available to them, which may push more to seek health treatments, Loghan Young said.

“The big key there is awareness,” she said.