Putin Declares ‘Victory’ In Syria Over ISIS — And The US, Sort Of

As far as Russian President Vladimir Putin is concerned, the ISIS militants and the Western-backed rebels who helped flush the... 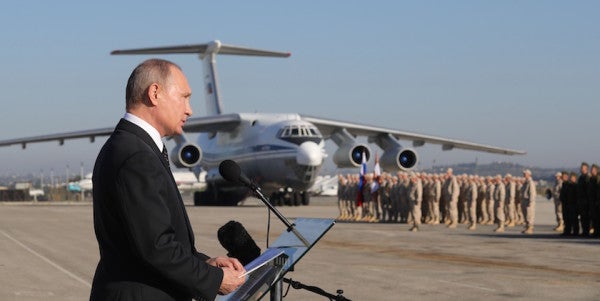 As far as Russian President Vladimir Putin is concerned, the ISIS militants and the Western-backed rebels who helped flush the terror group from Syria represent the same thing: opposition to President Bashar al-Assad, whose violent response to peaceful protests of his regime in 2011 ignited a civil war that has claimed as many as half a million lives and left much of his country in tatters.

It was that opposition Russian troops were sent to Syria to crush. And now, according to Putin, the six-year-old Syrian Civil War is over.

On Dec. 11, during his first ever visit to a Russian airbase in the country, Putin declared victory in Syria — not just over ISIS, but also over the Syrian Democratic Forces (SDF), the loose alliance of Kurdish and Arab militias that the U.S.-led coalition has bolstered with nearly 15,000 airstrikes, a $1 billion arsenal of weapons and equipment, and roughly 2,000 U.S. military support personnel on the ground.

“In just over two years, Russia’s armed forces and the Syrian Army have defeated the most battle-hardened group of international terrorists,” Putin told Russian and Syrian troops in Syria on Dec. 11, according to The New Yorker. And while he ordered his defense minister, Sergei Shoigu, to begin withdrawing Russian forces from the country, Putin made clear that the Assad regime would continue to benefit from Moscow’s support. At least two Russian bases in Syria will remain operational — in case, Putin said, “terrorists raise their head again.” ISIS militants represented only a fraction of the insurgents fighting to topple the Syrian government.

After his speech, Putin boarded a plane to Turkey to meet with President Recep Tayyip Erdogan so the two could discuss next steps in the peace negotiations — a process that Putin and his allies have also come to dominate.

Russia, Iran, and Turkey rescued the Syrian regime from the brink of annihilation just a couple years ago, reinforcing Assad’s beleaguered military with air, naval, and ground support. Assad has now managed to regain control of the majority of Syria’s population, giving his allies exactly what they had hoped for in return for their help: a strategic foothold in the region.

The Trump administration had initially hoped that the U.S. and Russia could work together to bring the Syrian civil war to an end. As The New Yorker notes, that option was more or less wiped off the table on April 6, when Trump ordered a U.S. missile strike on a Syrian base in retaliation for the regime’s use of chemical weapons to kill more than 80 people.

While removing Assad from power was one of the White House’s key objectives in Syria, it has become increasingly clear that a regime change would require more troops and resources than the U.S.-led coalition is willing to muster. The SDF spearheaded the campaign that drove ISIS from Raqqa in October, but it never coalesced into an alliance formidable enough to contend with Assad’s forces and their foreign allies. U.S. and European government officials told The New Yorker that the the Trump administration is now “prepared to accept” Assad’s continued rule until the next presidential election, which is in 2021. Assad’s family has ruled Syria for more than 50 years ago.

Of course, Washington isn’t just ceding Syria to Assad. Iran’s involvement in the Syrian violence was part of a broader effort to establish a so-called “Shia crescent” — a swath of Iranian-friendly territory that, if established, would hook around Saudi Arabia and extend from Afghanistan to the Mediterranean. The crescent runs through Iraq and Syria, and Iran now seems to be swaying the governments of both. Iranian-backed Shiite militias have proliferated in the region, while Lebanon’s Hezbollah, which is also supported by Iran, has featured prominently on the battlefields of Syria, fighting in defense of the regime.

The SDF clashed numerous times with Assad’s forces during the anti-ISIS campaign. On several occasions, the U.S. military got involved, deploying airstrikes against pro-regime troops advancing on positions occupied by SDF and American troops. In June, U.S. commandos were dispatched to the Syria-Turkey border to quell escalating skirmishes between the SDF and the Turkish military. Turkey considers the Kurdish People’s Protection Units — a primary component of the SDF — a terror group.

The U.S. military has exercised extreme restraint to avoid getting drawn into a fight with pro-government forces. Airstrikes against regime troops were carried out only in self-defense, and usually after those troops had ignored calls to withdraw from “deconfliction zones” — buffers around coalition bases.

“The Coalition does not seek to fight Syrian regime or pro-regime forces but remains ready to defend themselves if pro-regime forces refuse to vacate the deconfliction zone,” CENTCOM said in a statement released on June 6 after coalition bombs pummeled a convoy of pro-government troops outside a garrison on the Syria-Iraq border where U.S. and British special forces trained rebels.

That the U.S. doesn’t have nearly the same level of clout in the region that it did a few years ago became glaringly evident in mid-October, when Baghdad deployed troops to take the Kurdish-held city of Kirkuk. The offensive was launched soon after an overwhelming majority of Kurdish voters affirmed Kurdistan’s right to declare independence from Baghdad.

Both the Iraqi army and the Kurdish peshmerga have been trained and supplied by the U.S. military. Washington said it would remain neutral in the skirmish but urged both sides to resolve the dispute diplomatically. Baghdad’s troops marched on, however, joined by members of a powerful Iranian-backed Shiite militia.

The communications director for the president of the Kurdish Regional Government told The New York Times on Oct. 18, while the battle in Kirkuk was still underway, that the Kurds were “disappointed at how the United States looked at this.”

“Now they are giving Iraq to Iran as a present,” the communications director added. “That’s as diplomatic as I can be.”