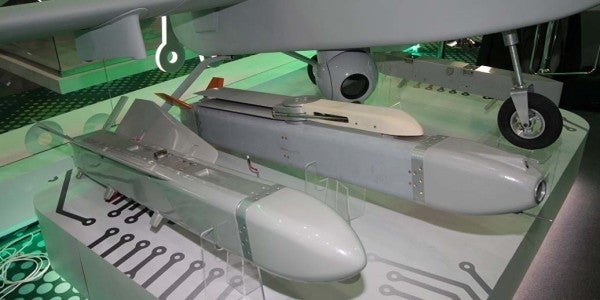 Russian engineers have designed munitions specifically for the nation’s unmanned aerial vehicle (UAV) fleets, according to RIA-Novosti news agency. The weapon’s combat weight is up to fifty kilograms (110lb). In effect, Russians have built precision-guided weapons for their UAVs. According to RIA, the developers are designating these weapons as “air-borne delivery vehicles.” This family of missiles is weighing fifteen, twenty-five, fifty and one hundred kilograms, and is intended for warhead delivery of up to fifty kilograms for a range of twelve to twenty kilometers (seven to thirteen miles) in the “glide mode,” and up to one hundred kilometers (sixty-two miles) when powered by the engine.

RIA states that the weapon is between one to two meters (3.3-6ft) in length, with a payload and warhead weight of seven, seventeen, twenty-five and fifty kilograms. All versions have a modular construction that allows operators to build either “glide” or engine-powered versions, depending on the mission, as well as change the payload and targeting modules. Radio-correction line can be used to change targeting in mid-flight, while navigation is carried out with both inertial system and satellite positioning systems. Target guidance is conducted via laser system, as well as a video control module.

Such a development is no small feat for the growing Russian UAV manufacturing and expertise industry. Unlike the United States, its Western allies, and nations like Israel, China and even Iran, Russian Federation lacks mid- to long-range UAVs with precision-strike capabilities. Russia’s current unmanned aerial vehicle fleet is almost exclusively tasked with ISR (intelligence, surveillance and reconnaissance) duties, and carries a light payload consisting of cameras and various sensors and transmitters. Up until recently, Russian forces had no way to deliver munitions payloads against adversaries via its UAVs, although recent promotional videos from test ranges and military exhibitions showed quadrocopters/multirotor models dropping small bombs on targets. Although Russian military may have used such simple payload delivery in combat zones like Syria, the recent RIA announcement about guided munitions will greatly extend Russia's reach in its military area of operations. However, there is a major caveat—such weapons must be carried on larger and heavier UAVs that Russia currently does not have in its arsenal.

There are significant signs that Russia intends to correct such deficiency. Recent unveiling of production-ready Orion-E long-range UAVs at MAKS-2017 air and space expo, as well as the existence of a small T-16 combat drone point to eventual acquisition of such vehicles by the Russian military, although probably not earlier than 2018–2019 time frame. Other UAV models with potential to carry various munitions are undergoing testing and evaluation by the state and military authorities, such as the recently-announced unmanned helicopter and tilt-rotor designs. American, Israeli and now Chinese combat drones all have the capacity to deliver payloads across various distances, making them a must-have for militaries engaged in modern conflict. Russia’s own guided weapons for the unmanned aerial vehicles strengthen the country’s emerging UAV capability, and may even win international orders should foreign customers seek out Moscow’s technologies for their own UAV fleets. As before, the success of such weapons will depend on the available military budget and proper coordination between Russian government and its military-industrial enterprises.

Samuel Bendett is a researcher at the CNA Corporation and a foreign affairs contributor to the RealClearWorld. Previously he worked at the National Defense University on emerging and disruptive technologies for government response in crisis situations. The views expressed here are his own.