Editor’s Note: This article is part of a new Task & Purpose column called “Swamp Warfare,” in which thought leaders … Continued 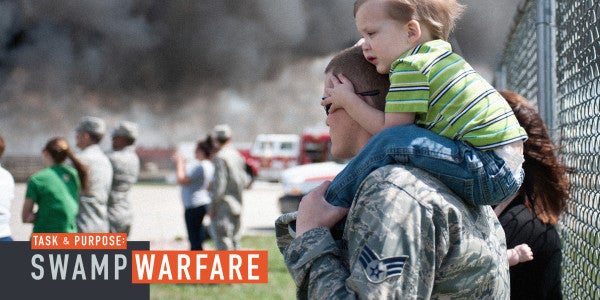 Editor’s Note: This article is part of a new Task & Purpose column called “Swamp Warfare,” in which thought leaders examine the growing intersection of military, politics, and policy in the United States.

Under the Trump administration, the likelihood that the nation goes to war seems to be at an all-time high. But is it really “the nation” that goes to war these days? The military has been all volunteer for decades, and has grown increasingly segregated from society at large. A few trends stand out in who chooses to serve: The vast majority of service members are male, the South is overrepresented, and perhaps most worrisome, military service has increasingly become a family affair.

Fewer and fewer communities are bearing the burden of sending loved ones to war. One consequence of the end of conscription is the ability to have very few Americans impacted by or connected to service, and a society that struggles to understand and interact with those who do. Less than 1% of Americans serve on active duty at any time, and the veteran population comprises less than 10% of the population. The best ambassadors for military service are those who have served themselves, so it should come as no surprise that the armed forces have become increasingly insular.

This is not exactly a new phenomenon or even one that’s isolated to the military. The children of doctors become doctors, lawyers become lawyers — in sociology, the term for it is “professional inheritance.” And yet, neither the average doctor or lawyer is being asked to wield force on behalf of a democracy, making it very different when it comes to the generations of war we’re seeing in the military community today.

Families also carry the costs of military service, and surveys indicate military spouses are as likely to have a parent who served as service members today, many of whom already have a child serving as well. This used to be far closer to the norm – with 77% of adults over 50 indicating they had an immediate family member who served, as compared to only 33% of those ages 18–29. These surveys echo the Department of Defense’s own findings that approximately 80% of enlisted recruits have a family member who served, with over 25% noting they had a parent who served. Though it varies from service to service, the trendline in American society is stark.

Not only does this isolation potentially allow for force to be used with relatively few consequences for presidents and Congress alike, it represents a fundamental weakness in the all-volunteer force. The military is struggling to ensure a steady stream of high-quality recruits, and if the incredible stress and operational tempo of the past few decades create a chasm in the propensity to serve among military families, it will cause serious damage to the recruiting pipeline. Veterans are also historically far more likely to recommend military service than civilians, but disillusionment could portend a time when that’s not the case, a trend already outlined in survey results showing families still on active duty are less likely to recommend military service than veterans.

Recruits take the oath of citizenship during a naturalization ceremony at Recruit Training Command, the Navy's only boot camp, 2012.U.S. Navy photo

The insularity of the force continues to be exacerbated by policies excluding Americans who otherwise meet all of the conditions necessary to serve. It is already difficult for the armed forces to find those who physically and mentally fit, have the requisite education, lack criminal records or disqualifying tattoos, and on top of all that, have a propensity to join the military. There is now the added issue of a force that has gone back on its commitments to service members — with the fate of transgender troops hanging in the balance, and many foreign nationals who are an immeasurable asset for their cultural knowledge, language skills, and willingness to serve, losing the path to citizenship they had been promised under the MAVNI program and depriving Americans who are serving from a critical resource to help them succeed on the battlefield.

The cross-section of service members who are being routinely deployed — adding to the number of troops on the ground in Iraq and Afghanistan, waiting just over the border in South Korea, or executing grueling and sometimes fatal training here at home in the United States — can’t be said to truly represent the country as a whole. Rather than front-page stories, fatalities seem to barely register as a blip on the radar of our public consciousness. It is hard to believe there would be so little outcry over the recent slew of training accidents, the risk to the lives of service members and their families should North Korea choose retaliation at the hands of an inflammatory tweet, or the haphazard “more of the same” strategy for Afghanistan if more Americans knew someone in uniform.

Though all of the services are striving to gain a broader cross-section of America in their recruiting, it is a difficult needle to thread. When trying to hit accessions goals, places where the military has historically been successful in recruiting make appealing options, offering the best return on investment (as measured by sheer number of contracts signed) compared to places like the Northeast. However, this short-term view is costing the military a long-term footprint across the United States that would do a better job of ensuring there is a future pipeline of recruits by spreading the history of military service beyond the small communities who raise their right hands over and over. The lack of engagement of the public with the military has consequences beyond simply who is successfully recruited into the armed forces, raising questions as to the proper role of a volunteer force in a democratic society.

Amy Schafer is an Adjunct Fellow at the Center for a New American Security and author of the report “Generations of War: The Rise of the Warrior Caste and The All-Volunteer Force.”