Will Trump’s Military Fetish End Up Hurting American Democracy — Or Saving It?

Editor’s Note: This is the first edition of a new Task & Purpose column called “Swamp Warfare,” in which Jason... 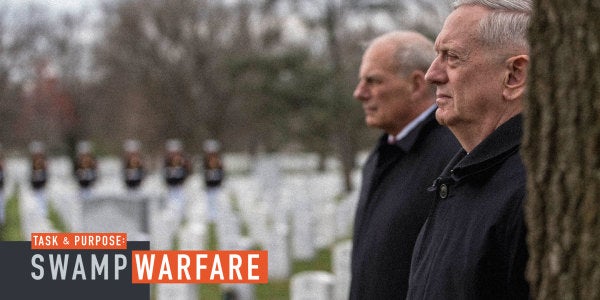 Editor’s Note: This is the first edition of a new Task & Purpose column called “Swamp Warfare,” in which Jason Dempsey and other thought leaders examine the growing intersection of military, politics, and policy in the United States.

It is difficult to read a story about President Donald Trump without also hearing about “his generals.” Since Lt. Gen. H.R. McMaster became national security advisor and retired Marine generals John Kelly and James Mattis moved in as chief of staff and secretary of defense, respectively, commentators have been busy discussing the implications of so many men with military backgrounds in powerful political positions.

Based on the number of articles discussing the ascent of these generals, there is clearly a lot of consternation about what this means for both how the government is run, and for the interaction between the military and the society it serves. Despite a few hyperbolic headlines, there is no military coup in the works, but the concern for the future of American civilian-military relations is palpable, and presents an opportunity for an extended conversation on the role of the military in America.

As the attitude of the American public toward the military can be described as one of “respectful indifference,” it’s time to explore what that actually means and why. Americans almost uniformly view the military as competent and worthy of respect, but often have little interaction with service members or veterans, and lack any real understanding of how the military operates.

…we may be entering an era where support for the military is no longer bipartisan, but tied to party affiliation.

This dynamic comes from the trend of separating the military from the political. For much of human history the ability to fight, or to lead others in battle, was something of a prerequisite for political leadership. As recently as the American Revolution and, to a lesser degree, the Civil War, political leaders often raised, trained, and led units into battle. But by the 20th century this was no longer common. As explained by the famous British general and scholar, Field Marshall Earl Wavell in 1939:

Interchangeability between the statesman and the soldier passed for ever, I fear, in the last century. The Germans professionalized the trade of war; and modern inventions, by increasing its technicalities, have specialized it. It is much the same with politics, professionalized by democracy. No longer can one man hope to exercise both callings, though both are branches of the same craft, the governance of men and the ordering of human affairs.

With this separation of military and political leadership in the 19th century came questions of control. The prevalence of military coups around the world highlights the difficulty of maintaining political control while someone else directly controls the military power of the state. The United States has done well in this regard, due to well-established norms of civilian-military control that started with George Washington. The last 50 years of civilian control of the military have largely been driven by the groundbreaking works of sociologist Morris Janowitz, who emphasized the interconnected nature of military and political leadership and encouraged a shared obligation to the formulation of national security policy, and political scientist Samuel Huntington, who was more an advocate of distinct spheres of civilian and military control, with the latter’s view dominating our approach. While Huntington’s view has often been overly simplified and bastardized to imply a clear demarcation between all things political and military (much to the consternation of the ghost of Carl von Clausewitz), this approach has allowed the military a degree of separation from the messy realities of American politics.

So while the reputations of other government institutions have cratered in an era of extreme partisanship, the military has been able to sustain its reputation by being seen as above the fray of rancorous political battles. But what happens when the military, or military leaders, begin to play a greater role in politics?

The ascension of active and newly retired generals to high political positions puts the military’s reputation at risk in several ways. In the case of Kelly and Mattis, they have assumed two of the most powerful political positions in the United States. As White House chief of staff, Kelly wields tremendous influence on determining and executing the priorities of the U.S. government. And while he may not fully agree with everything that comes out of the White House, the actions of the administration carry his implicit endorsement.

Similarly, as secretary of defense, Mattis oversees the world’s greatest military, and a lion’s share of the federal budget. In this role, he is no longer just another Marine tasked with carrying out military operations, but has a direct role in formulating and defending how the United States deals with the rest of the world while protecting its own interests.

Yet only recently retired, both Mattis and Kelly are defined primarily as Marine generals, and referred to by the president as such. In today’s era of hyper partisanship, this cannot fail to influence perceptions of the political attitudes of the military writ large, with the short-term implications being positive or negative depending on where one sits on the ideological spectrum. Regardless, we may be entering an era where support for the military is no longer bipartisan, but tied to party affiliation.

In his tenure as national security advisor, McMaster has often done much more than coordinate the interagency process, and has instead been an advocate of specific policy recommendations, in addition to defending and articulating the president’s worldview. If and when he returns to a regular military billet, he will have not only an independent political identity beyond being “just another general,” but will also have made public a worldview that may or may not be in line with the next presidential administration. It is difficult to envision a future McMaster, in uniform, appearing before Congress and declaring to be there “as neither a Democrat nor a Republican” as Gen. Omar Bradley once stated, and is regularly expected of senior military officers.

It remains to be seen how these developments will affect the military’s influence and reputation in the long term, but they are important enough to warrant further conversation. These issues, along with those related to the demographics of the force and “who serves” and who does not, are not going away anytime soon, and will likely alter civilian-military-political relations for years to come. These are conversations that call for both military and civilian engagement, as we collectively must decide how to sustain the reputation and effectiveness of the U.S. military, regardless of the party in power.

Jason Dempsey is a retired Army officer and the author of Our Army: Soldiers, Politics, and American Civil-Military Relations. He is also the co-founder of MILLIE, which was recently named one of Forbes’ top veteran startups in America.