When is a border force not a “border force”? When the Turks vow to destroy it. Media outlets have recently... 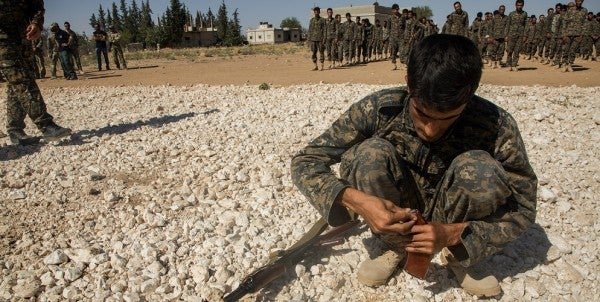 When is a border force not a “border force”? When the Turks vow to destroy it.

Media outlets have recently reported that the United States planned to train 30,000 Kurds to serve as a border force in northern Syria. Naturally, the Turks — who consider the Syrian Kurds to be terrorists — were not thrilled. Turkish President Recep Tayyip Erdogan, with his characteristic restraint, has vowed to “drown” the so-called border force before it can be stood up.

The Department of Defense issued a statement on Wednesday clarifying that the local security forces being trained in Syria are not a border force at all. Rather, they are meant to stop ISIS from launching a guerrilla war.

“We are keenly aware of the security concerns of Turkey, our coalition partner and NATO ally,” the statement says. “Turkey's security concerns are legitimate. We will continue to be completely transparent with Turkey about our efforts in Syria to defeat ISIS and stand by our NATO ally in its counter-terrorism efforts.”

As the Turks threaten to attack Kurdish forces in the Syrian town of Afrin, Task & Purpose asked the Pentagon what in the living hell is going on. The following is excerpts from an interview with Pentagon spokesman Eric Pahon, edited for length and clarity.

What is this force and its mission?

First of all, this is not a new “army” or “border security force” as you have seen reported. This is an internally focused security force set on establishing stability and preventing the return of ISIS.

You are looking at stabilizing a variety of areas that we have already freed from ISIS. What we don’t want to happen here is that we free these areas and then ISIS just flows right back in.

As we look to encircle ISIS in the middle Euphrates River Valley, you’re going to see more and more of their fighters trying to flee to other areas of the country. In the Idlib area, there’s already been ISIS claims that they have retaken some territory. We do not want to see that happen in the eastern part of the country.

In addition, we need to prevent the inflow and outflow of foreign fighters. We’ve been very successful in limiting that. What we want to do is make sure that they don’t have any kind of route that they can get out of the country. We also want to stop their resupply. The stability force is going to assist with that.

How many people will be part of this group?

The size of this force is going to be determined by needs on the ground. Obviously, we are in close coordination with our coalition allies, including Turkey, about what the future is going to look like here.

The needs on the ground are going to determine what the size of this force is. I can’t put a number on it right now.

Will this group incorporate existing forces on the ground or will the U.S. military train, arm, and equip new fighters?

This isn’t really much of a shift from the things that we’ve already been doing: Training, advising and assisting local partner forces on the ground.

The SDF [Syrian Democratic Forces] is made up of local forces from these areas that we are liberating from ISIS. You are looking at very much the same thing here.

The Turks have said publicly that they are going to attack Afrin. Does the Department of Defense have a response?

We don’t have operations ongoing in Afrin. What we would ask is that all actors in the region avoid any further escalation and maintain the focus on our common enemy, which is ISIS.