President Donald Trump shot down a veiled vision of peace offered by Iran's president on Sunday to full-on threaten the... 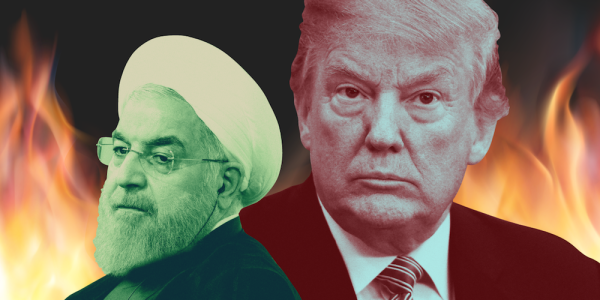 President Donald Trump shot down a veiled vision of peace offered by Iran's president on Sunday to full-on threaten the Islamic Republic with historically epic confrontation — and it looks as if his administration could topple the country.

To Iranian President Rouhani: NEVER, EVER THREATEN THE UNITED STATES AGAIN OR YOU WILL SUFFER CONSEQUENCES THE LIKES OF WHICH FEW THROUGHOUT HISTORY HAVE EVER SUFFERED BEFORE. WE ARE NO LONGER A COUNTRY THAT WILL STAND FOR YOUR DEMENTED WORDS OF VIOLENCE & DEATH. BE CAUTIOUS!

Trump was responding to statements from Rouhani, Iran's elected political leader who serves at the pleasure of Ayatollah Ali Khamenei, the country's religious supreme leader.

In a meeting with Iranian diplomats, Rouhani offered a vision of peace with the U.S. but also said a conflict between the two would be “the mother of all wars.”

Rouhani's statement, though balanced against the threat of massive war, actually represents a shift in Iranian foreign policy.

Iran has strongly opposed the U.S. since its theocratic government took power in 1979, with officials chanting “death to America” in parliament. Iran's navy has the explicit, though lofty, operational goal of destroying the U.S. Navy.

Trump is coming for Iran's leadership

Rouhani, in extending a veiled olive branch, may have been acting in anticipation of an onslaught by Trump.

Several officials told Reuters that Trump would pressure Iran's leaders with tough sanctions and an information campaign meant to erode their support.

Recent statements from Secretary of State Mike Pompeo indicate this shift has already taken place, as the U.S. expresses its hope for the Iranian people to install a more moderate, secular government.

It could actually work

Since late 2017, Iran has seen wave after wave of grassroots protests with citizens rejecting the regime's economic, social, and foreign policies.

Iranian women rejecting the forced dress code of headscarves have become emblematic of the movement.

While European countries strongly opposed Trump's withdrawal of the U.S. from the Iran nuclear deal, the threat of U.S. sanctions has successfully made Tehran a pariah in the business world.

After Trump's withdrawal, Iran's currency ballooned and the government imposed a set of strict financial controls on its citizens, capping the amount of foreign currency they can hold and seizing overseas accounts.

As Iran's working class rejects the government's foreign-policy ambitions, the upper class has had its aspirations of foreign travel or education crushed by such financial restrictions. Iran's government has responded to protests with security forces and violence time and time again, but the unrest has continued on a regular basis this year.

At the same time, Israel has proved adept at beating back Iran in its push toward the Mediterranean. In May, after a rocket attack that Israel attributed to Iran, Israeli jets devastated a large swath of Iranian forces in Syria.

Russia, normally a powerful ally of Iran, swiftly turned its back on Tehran, refusing to sell it air defenses even when its forces were coming under heavy fire from Israel and telling Iran's militias to leave Syria.

Karim Sadjadpour, an Iran expert at the Carnegie Endowment for International Peace think tank, told Reuters that Trump's strategy could produce one of two outcomes.

“Outcome one is capitulation, forcing Iran to further curtail not only its nuclear program but also its regional ambitions,” Sadjadpour said. “Outcome two is the implosion of the Islamic Republic.”

The U.S. maintains it does not seek regime change for any country, even those as antagonistic as Iran and North Korea.

But the people of Iran have shown a genuine distaste for the theocracy's policies, and the noted Iran hawks Pompeo and John Bolton, the national security adviser, may see the opportunity as too good to pass up.