There’s trouble brewing for President Donald Trump’s historic, unprecedented, spur-of-the-moment summit with the grandson of a communist revolutionary who carved... 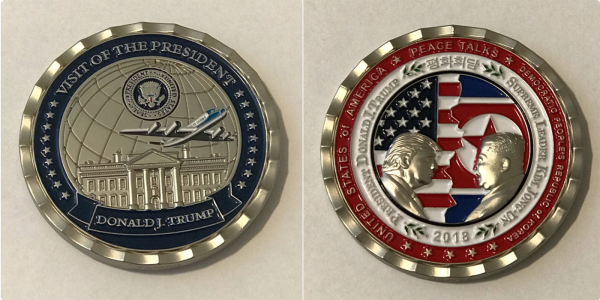 There’s trouble brewing for President Donald Trump’s historic, unprecedented, spur-of-the-moment summit with the grandson of a communist revolutionary who carved up the Korean peninsula, along with 37,000 or so American servicemembers, back in the day.

Also, the White House made a challenge coin to commemorate the maybe-happening summit. Sorry, they didn’t design or produce it; they simply ordered it for quiet distribution to VIPs and will be offering a few for sale!

We’ll get to that in a bit. First, let’s talk about the CinC-level clusterf*ck that is this summit plan.

Not long after Trump took North Korea’s bait and responded to its temper-tantrum missile tests by threatening to immolate the East Asian peninsula with “fire and fury like the world has never seen,” South Korea’s left-leaning president, Moon Jae-in, brought Trump an offer from North Korean dictator Kim Jong-Un: How about a face-to-face summit?

That offer, long held out to successive American presidents, would give Kim immediate political legitimacy as North Korea’s “Supreme Leader,” which is why previous presidents rejected it. But Moon and his emissaries sweetened the deal for Trump: You’ll get credit for denuclearizing the peninsula, they said. Trump accepted on the spot, without consulting his national security adviser or defense secretary.

As professor Robert Kelly, a Pusan National University poli sci professor and expert on the Korean conflict, put it, that was probably dumb, but the Koreans figured flattering Trump into a summit was an easy way to avoid carnage:

2a) Moon likely exaggerated this to tie Trump to a diplomatic track to prevent him from backsliding into last year’s war-threats which scared the daylights out of South Koreans. If Trump were less vain and had allowed his national security staff to vet the NK offer, he might have

3) Flattering Trump into diplomacy is likely also why Moon’s government credited Trump with driving NK to negotiation through maximum pressure and suggested that Trump receive a Nobel peace prize.

4) It is an open secret in Korea that this was just flattering Trump to prevent him from starting a war. No one actually believes it. My students & colleagues laugh at the suggestion. No one thought the western media wd actually start seriously debating it. Trump is loathed here.

In the meantime, Trump’s latest chickenhawking aide, National Security Advisor John Bolton, said North Korea’s denuclearization could work like Libya’s, which worked out great for Libya’s dictator and those State Department officials in Benghazi. North Korea reacted predictably, with a name-calling propaganda release threatening that maybe they’d have to cancel their summit with the leader of the free world. Like Professor Kelly said: Here comes the hangover.

Of course, a lot of people solve their hangovers with a little hair of the dog. So the White House Communications Agency this week started distributing a new challenge coin to commemorate the summit that hasn’t saved the world yet:

Less than a month to Trump-Kim summit, White House Communications Agency (WHCA) releases its “trip coin.”
This is #74 of 250 made. pic.twitter.com/UTEJg1GyWv

There’s no way a president pre-pressing a challenge coin to commemorate a not-yet-held summit with the North Koreans could ever go wrong. Except… What is going on here?

Is that… Kim Il-Sung’s obese dictator grandson, who ordered the murder of his half-brother (and thousands of others in slave camps), next to the president of the United States, confirmed in large metal letters as the “Supreme Leader” of the Democratic People’s Republic of Korea, a bullshit title that Kim’s dad had inserted into his country’s “constitution” in 2009?

Did we just make stupid, despot-embracing foreign policy for a collectible coin? Frustrated conservatives seem to think so:

Not only is this premature, but it's exactly the sort of legitimacy Kim Jong Un was hoping for out of this dumpster fire of an idea. https://t.co/0I8E0Bvlgu

But the administration insists that’s not the case! After people started asking questions about these dumb dumb coins yesterday, Deputy White House spokesman Raj Shah put out a statement claiming the coins have nothing to do with the White House, other than the White House ordering, distributing, and selling them:

Since 2003, White House Communications Agency (WHCA) members have ordered a limited number of commercially designed and manufactured souvenir travel coins for purchase. These coins are designed, manufactured and made by an American coin manufacturer. These souvenir coins are only ordered after a trip has been publicly announced. The White House did not have any input into the design and manufacture of the coin.

How to reconcile the White House’s statement that it “did not have any input into the design and manufacture of the coin” with the fact that these coins were, in fact, ordered, received, and distributed by unnamed White House Communications Agency staff? It seems like either the White House is powerless to stop Big Coin from forcing it into a distribution deal of a crappy memento that depicts Trump, a broken American flag, and the grandson of a “communist” rogue state as its “supreme leader”… or the White House is being disingenuous.

Yes, this is a stupid use of my reporting time. But it could be worse; I could be blowing my wad on an iffy summit engineered to legitimize the world’s thirstiest insecure nuclear-armed leader, and also Kim Jong-Un.

Update, 2:30 p.m. EDT: No, we have not heard from the White House on our media query. But Trump, speaking to reporters today, said the summit might not happen as scheduled, because of North Korea's recent belligerent statements, which he blamed on China. “If it doesn’t happen, maybe it will happen later,” he said. “Maybe it will happen at a different time. But we will see. But we are talking.”

Trump says he's got this: "In the end it will work out. I can't tell you how or why, but it always does."