Whatever prejudices you hold about officers vs. enlistees — or ground-pounding grunts vs. managerial fobbits, flyboys, and squids — you’re … Continued 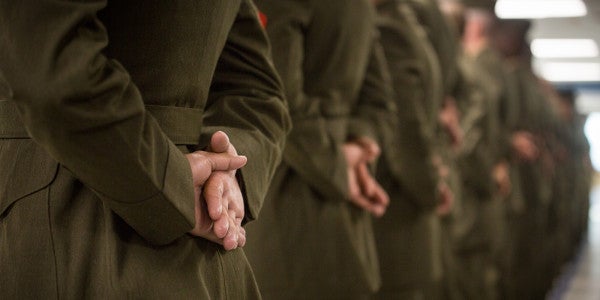 Whatever prejudices you hold about officers vs. enlistees — or ground-pounding grunts vs. managerial fobbits, flyboys, and squids — you’re probably about to cling to them a little tighter.

Among the many takeaways in Military Times’ far-ranging poll of service members’ attitudes toward President Donald Trump and his policies, the clearest may be these: The commander-in-chief’s strongest support within the armed forces comes from the uncommissioned, the Marine Corps, and the Army — and his biggest critics in the service come from the officers’ ranks, the Navy, and the Air Force. What service you’re in, and whether you’re enlisted or not, turn out to be the two biggest factors in your support for Trump.

It’s hard to overstate the significance of the paygrade divide. Nearly half (48%) of all enlisted service members approved of Trump, while fewer than a third (30%) of all officers shared that view. And a majority of officers (53%) viewed Trump unfavorably, suggesting his command style poses a bit of a headache for service members with greater responsibilities, education and status.

That split is unprecedented: The newspaper’s last military poll on attitudes towards then-President Barack Obama, conducted in January, found that officers and enlisteds liked him — and disliked him — in pretty equal proportions.

When only 30% of officers approve of the Commander in Chief, we have a serious problem https://t.co/UCQt7qymcj

One retired Air Force colonel called the Trump rank divide “shocking,” telling Military Times,“I never thought that you would have a disparity in the numbers like that.” He went on:

That colonel suspects that Trump’s unpredictability is both the source of enlisted troops’ attraction to him and officers’ reservations. “When you have a hierarchy like we have within the military, part of it is that there is respect for the chain of command,” he told Military Times. “What Trump may offer is, it doesn’t matter. He’s just going to say whatever he wants to say, regardless of what the expected norms are for that position.”

The service members Military Times interviewed sure seemed to confirm that disconnect. A retired sergeant first class told the newspaper: “Enlisted people like a man who says what he means and would like to see the job done, no frills, no questions asked. From the way President Trump has presented himself, he has been that kind of person.”

But a Navy lieutenant blasted Trump for “creating unnecessary division domestically and revisiting political battles that have already been settled and accepted… It causes so much upheaval, stress and wasted resources, and has a real impact on morale.”

The Trump service divide is concerning, too. Marines love the president, with nearly two-thirds approving of the commander-in-chief, and the Army loves him significantly more than they hate him, with 46% of soldiers approving and 38% disapproving. But the Air Force and Navy aren’t really sold on him at all, with a near-majority of sailors explicitly disapproving of the president.

How does the military feel about President Trump? A new poll has answers https://t.co/tPw4EhrHtd via @theblaze

But that service split is unsurprising to anyone who’s visited a military comment board since the dawn of the internet — oases of braggadocio and oneupsmanship where self-identifying grunts, operators, and hard-chargers tend to be proudly and provocatively conservative and take pains to distinguish themselves from service members they feel enjoy more creature comforts, resources to play with, and formal education.

In other words, those political differences track pretty strongly with traditional service and branch rivalries. They’re understandable — and not nearly as troubling as a deep, unprecedented split between American military officers and enlisted service members over whether their commander-in-chief is an erratic, self-absorbed wrecking ball or a refreshingly blunt standard-bearer.

It’s worth noting that Military Times’ poll was a small sample of a large, raucous, far-flung military population: 1,131 respondents to represent roughly 1.3 million active-duty service members, with a 3% margin of error. And even in that sample, Trump enjoys more support in the military than among the civilian voters — par for the course for most presidents, especially conservatives.

But remarkably, still fewer than half of the service members polled expressed support for Trump, a first-year president who has perhaps done more than any recent president to festoon his administration with military imagery and celebrations — and who campaigned against the legacy of Obama, a president with consistently low military support.

It’s unclear how these attitudes may change in the future: The Military Times poll was conducted in September, before the White House got into a messy media slugfest over whether Trump made a military widow cry in a condolence call. But if the past nine months have taught us anything, it’s that — love him or hate him — not much can make people change their minds about Donald Trump anymore.