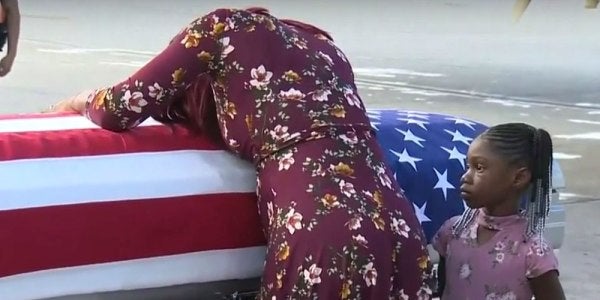 The 25-year-old South Florida native, had been assigned to the 2nd Battalion, 3rd Special Forces Group out of Fort Bragg, North Carolina. Johnson deployed to Niger as part of an “advise and assist” mission, to train Nigerien security personnel and assist French forces against al Qaeda-affiliated militants in neighboring Mali.

He was among the four soldiers killed in an ambush while on a reconnaissance patrol near the Niger-Mali border. A Delta flight bearing his casket arrived Tuesday at Miami International Airport, escorted by a member of his unit and greeted with a water-cannon salute, according to CBS News.

On the tarmac, Johnson was met by his widow, Myeshia. Pregnant with the couple’s third child and with their eldest in tow, Myeshia did what too many military spouses have done since the dawn of the Global War on Terror: She bent over her late husband’s casket and wept.

.@USArmy Sgt. La David Johnson, 1 of 4 Soldiers killed in Niger, returns home to #Florida with his pregnant widow & daughter by her side pic.twitter.com/IyGc8kBRSi

It’s a powerful scene, but it’s also an important reminder amid a toxic, tweet-fueled political firestorm over military deaths that threatens to overshadow the real story: those who serve and pay the ultimate price.

On Oct. 16, in response to criticism over his silence on the four Americans killed in Niger, President Donald Trump falsely claimed that previous presidents, including President Barack Obama, failed to call Gold Star families during their time of grief and mourning. The next day, Trump doubled down on his criticism, claiming Obama had failed to consoled White House Chief of Staff Gen. John Kelly after his son was killed in Afghanistan in 2010. Unnamed White House officials spread that message to reporters as a talking point. (In reality, Obama hosted a breakfast for Gold Star families on Memorial Day in 2011, where Kelly was seated next to then-First Lady Michelle Obama).

And while Trump did phone Myeshia Johnson just before her husband’s body arrived at Miami International Airport yesterday afternoon, the moment of respect and grief quickly devolved into a mudfight. Democratic Rep. Frederica Wilson, who was accompanying Myeshia when Trump called her, charged that Trump told the new widow that her husband “knew what he signed up for.” Trump disputed the claim until Johnson’s mother, Cowanda Jones-Johnson, affirmed Wilson’s account of the call. “President Trump did disrespect my son and my daughter and also me and my husband,” she told the Washington Post on Oct. 18.

As Washington Examiner’s Dave Brown points out, this is officially the third day of this sick political circus — and that’s three days too many. Overshadowed amid the sound and fury of the current commander-in-chief’s pathological fixation on the flawed U.S. media ecosystem are those four Army operators who gave their lives in a conflict far from home that few Americans know, or even seem to care, about.

But where’s the focus among politicians (and the journalists who cover them) on the life and service of Johnson, a husband and father known around his Miami Gardens neighborhood as the “Wheelie King” for his love of bicycles and cars, per Fox News? Johnson met Myeshia when he was six. Apparently, Trump didn’t even remember the fallen soldier’s name.

What about Dustin Wright, the 29-year-old North Carolina native who was the first casualty in a family with a military legacy reportedly dating back to the War of 1812? “To our records, we had not lost a single member until Dustin. That’s 205 years, that’s a good run,” his brother Will told WRAL-TV on Oct. 15. “So, it’s been great to hear that history and share that history and if once every 205 years this is a price we pay, then that’s what it takes.”

What about Bryan C. Black, the 35-year-old Puyallup, Washington, native remembered as a “competitive and strong-willed” child, who put his forceful personality to good use as a Green Beret medic in Niger? “The Army provided the challenges that Bryan craved throughout basic training, Ranger school, Special Forces, and related specialist courses, while excelling at medical studies during many late nights and weekends,” his family wrote in his obituary. “Bryan acted as a natural leader, helping his fellow soldiers where they struggled and maximizing their talents.”

What about 39-year-old Jeremiah Johnson from Springboro, Ohio, remembered by his friends and loved ones as “as a red, white and blue, rock-solid American with a great heart” who left behind a wife and two young daughters?

There are still unanswered questions surrounding the doomed mission in Niger, particularly around Johnson’s death. The Department of Defense initially withheld news of his death in “hopes he would be found alive,” per Stars and Stripes. Had he been captured? Were he and his comrades ambushed? If so, how? And anyway, why was a Special Forces detachment ostensibly on an “advise and assist” mission conducting a recon patrol near the Niger-Mali border? And what does the incident in Niger tell us about the future of those “advise and assist” operations that, according to Army Chief of Staff Mark A. Milley, are expected to mushroom globally for years to come?

The bluster and posturing that fills White House statements and cable news channels doesn’t just distract Americans from those troops and Gold Star families who bear the emotional burdens of sacrifice: It prevents us from both asking and answering the hard questions that help ensure their sacrifices weren’t in vain.

Both of these consequences bode ill for the entire American experiment; they are damaging symptoms of the “spurious nationalism” that Republican Sen. John McCain of Arizona, the former P.O.W., astutely criticized in pointed remarks about Trump on Oct. 17.

Gold Star families deserve better, and so do the American people — and it shouldn’t take a video of Myeshia Johnson in mourning to remind a population that.

You can watch CBS News' full video of Johnson's casket arriving in Miami below: