Only Trump Could ‘Open’ North Korea

The U.S. political establishment watched, shocked, as the unlikely socialism-hating Republican president boarded Air Force One for Asia, ready to... 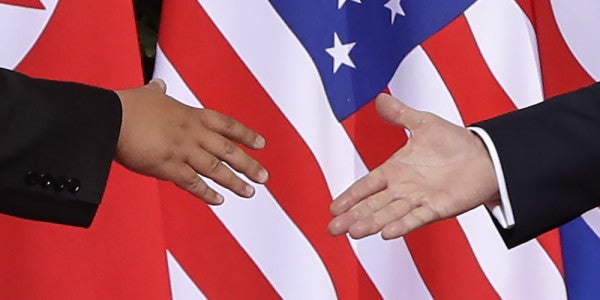 The U.S. political establishment watched, shocked, as the unlikely socialism-hating Republican president boarded Air Force One for Asia, ready to end 25 years of icy, sometimes openly antagonistic, relations with a brutal communist dictator across the Pacific. The year was 1972, and the occasion was President Richard Nixon’s historic summit with Chairman Mao Zedong, putting the United States and China on a path towards a relatively normal geopolitical equilibrium.

That meeting gave us the legend of Nixon “opening China” — and it also yielded one of the most telling quotes in American political history, from then-Sen. Mike Mansfield, a liberal who disagreed with Nixon on much, but not on the cause of Pacific peace. “Only a Republican,” Mansfield reflected, “perhaps only a Nixon, could have made this break and gotten away with it.”

Time is a flat circle, and President Donald Trump appears to have followed in Nixon’s footsteps with his historic courting of North Korean dictator Kim Jong Un in Singapore on Monday. The outcome of Trump’s meeting appears starkly different than the once-fraught Mao summit of 1972: Trump handed the God King of Pyongyang an insane propaganda victory, simultaneously making military concessions while ignoring his human rights abuses. But Trump’s historic visit to East Asia does have one big thing in common with Nixon’s: Only these two presidents could achieve them because only they were batshit insane enough to pull it off.

This isn’t (totally) ad hominem! Let’s remember that in the years ahead of his China visit, Nixon had deliberately embraced what he called “Madman Theory,” the threat that Nixon might just be nuts enough to use nuclear weapons to end the Vietnam War. “I want the North Vietnamese to believe I've reached the point where I might do anything to stop the war,” then-Chief of Staff (and future Watergate lackey) H.R. Haldeman later quoted POTUS as telling him. “We'll just slip the word to them that, ‘For God's sake, you know Nixon is obsessed about communism. We can't restrain him when he's angry—and he has his hand on the nuclear button.’”

Trump arguably subscribes to the same theory, especially given his propensity for showmanship and expert manipulation of the anemic U.S. media industry: Act fucking nuts and scare folks into submission. This has been the case since the moment Trump took office; who can forget the everlasting glory of “fire and fury,” delivered over a nice afternoon spread?

Very smart men have spent years doing mental backflips over the madman theory and its possible role in making nuclear holocaust less likely. According to the historian John Lewis Gaddis, hardnosed realists like Nixon’s right-hand diplomat, Henry Kissinger, saw the threat of mutually assured destruction, and its potential in deterring conventional conflicts, as the basic ground conditions for détente with communism. Some calculated craziness seems useful in that strategy. But the problem, is that, unlike Nixon, Trump’s tactical prowess is not some Samsonian extension of his jousting with the U.S. media at home: he might actually be fucking insane.

I mean, only a totally insane person would send a shockwave through the United States’ most important alliances with a petulant performance at the G-7 summit, ahead of a meeting with arguably the world’s most dangerous dictator; then hand that dictator essentially every piece of propaganda material he could possibly need; and then conclude the historic meeting by essentially writing off the American hostage that North Korea tortured to death on the one-year anniversary of his passing. This has been said frequently by many people, but Trump isn’t playing four-dimensional chess: He’s just eating chess pieces.

The parallels between Nixon’s and Trump’s East Asian diplomatic coups are striking, yes, but in the worst possible way: Nixon actually got concessions. Trump got punked into a celebrity endorsement deal.