Instead of sending service members out into the streets, President Donald Trump may want to consider helping homeless veterans off... 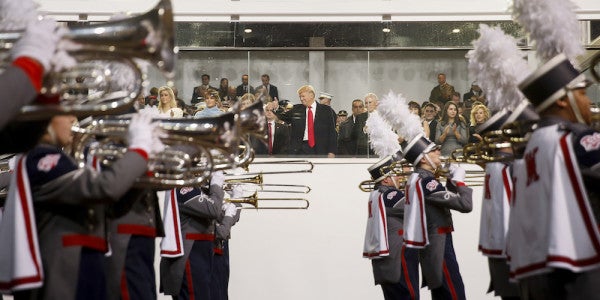 Instead of sending service members out into the streets, President Donald Trump may want to consider helping homeless veterans off of them.

A Department of Defense memo sent to Chairman of the Joint Chiefs of Staff Gen. Joseph Dunford of March 9 laid out the plans for a sprawling military parade in Washington, D.C. for Veterans Day on November 11th, 2018 — a triumphant parade, patterned after France’s annual Bastille Day march, that Trump has pushed for since February. In addition to requiring active-duty service-members to cram into their dress uniforms and stand by to stand by to stand by for hours on end, the parade would have a whopping price tag of somewhere between $10 and $30 million, according to the White House.

This is a puzzling proposition — and not just because the last time the U.S. enjoyed a military parade was after our last actual victory, following the conclusion of the Gulf War in 1991. Indeed, planning the big, fanfare-swaddled spend for Veterans Day seems like something of an insult to the estimated 40,056 veterans who are homeless on any given night, according to U.S. Department of Housing and Urban Development (HUD) estimates.

Even the parade’s uber-thrifty low-end price projection, $10 million, is enough to give thousands of struggling veterans a “thank you” that really means something. Here’s what else that marching-around money could do:

As Newsweek points out, the average cost of a single hot meal in the U.S. clocks in at $2.94 (although it can jump as high as $5.61, depending on where you live). That comes out to more than 3.4 million hot meals, or 84 square feasts for each homeless veteran in the U.S. — enough to feed each hungry ex-warfighter three times a day for 28.3 days. I’m not sure about you, but I’d take eating for a month over a dumb parade any day.

Give vets some goddamn rent money

Rental assistance currently helps more than 340,000 veterans to afford decent housing — and, according to a 2014 report, has reduced veteran homelessness by 33% since 2010. But that housing assistance has been imperiled in recent months: In December, Politico reported that the VA planned to divert $460 million specifically set aside for the HUD-Veterans Affairs Supportive Housing (HUD-VASH) program, which provides vets with housing vouchers. (The VA officially did an about-face on that plan in February after a public outcry, but the department’s initial thinking suggests those funds are negotiable.)

Forking over $10 million in erstwhile parade money could help. A landlord of a single HUD-VASH voucher recipient in, say, New York City, could expect to see $1,256 a month, with up to $1,500 in one-time incentives for choosing a vet over another Section 8 applicant. Heck, that’s enough to put roughly 3,600 vets up in the Big Apple for a month — long enough to get sweet jobs blogging with us!

There are a 30 VA-funded Community Resource and Referral Centers (CRRCs) across the country that offer services related to health and mental health care, housing support, career assistance, and access to benefits for homeless veterans. And they’re essential: 29,000 vets received assistance through CRRCs in 2015, according to VA data.

A nice fat $330,000 check for each facility could do a lot of long-term good — especially if the money, say, funds endowments to allow each center to further expand, regardless of future budget woes in Washington. Why the VA doesn’t have its own endowment boggles the goddamn mind, unless it’s because the next war will be fought by pointy-headed Harvard intellectuals. (Just kidding; they plan the wars; they don’t fight em.)

With shipping and handling, that’s eight Wild Tigers for each homeless veteran. I’m not saying it’s a good idea. It’s not. But it’s better than a fucking parade.