Peace On Earth. Purity Of Essence. 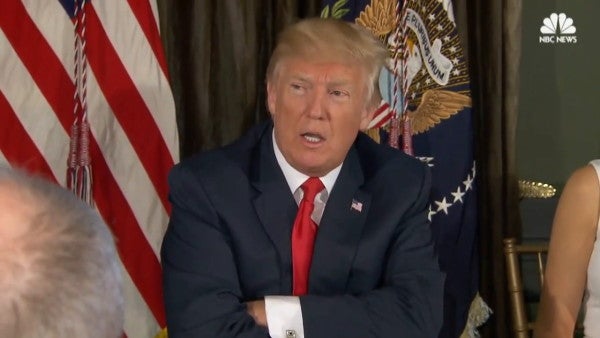 President Donald Trump has appeared to double down on his claim that the U.S. military's arsenal includes conventional weapons that are more powerful than nukes.

While commemorating the 18th anniversary of the Sept. 11 attacks Wednesday at the Pentagon, the president warned terrorists that they would be obliterated if they attacked the United States again.

“If, for any reason, they come back to our country, we will go wherever they are and use power the likes of which the United States has never used before,” Trump said. “And I'm not even talking about nuclear power. They will have never seen anything like what will happen to them.”

This is at least the second time in as many months that the president has asserted the U.S. military does not need to use nuclear weapons to wreak destruction on a scale not seen since God whacked Sodom and Gomorrah.

On Aug. 20, Trump repeated his talking point that the U.S. military could kill 10 million people in Afghanistan within a week, adding “this is not using nuclear .”

As of Wednesday, it was not immediately clear which super-weapons Trump referred to in both instances. Neither the White House nor the Pentagon provided a comment for this story.

Nuclear arms control expert Jon Wolfsthal, who served as a special assistant to former President Barack Obama from 2014 to 2017, raised the possibility that Trump does not know what he is talking about.

“Nuclear weapons remain the most powerful weapons in the US military arsenal,” Wolfsthal told Task & Purpose on Wednesday. “While we have a vast array of conventional military weapons and many means of delivery, none come even close to the explosive or destructive power associated with our nuclear arsenal.”

“I will assume that this is consistent with the president consistent effort to say anything he does is better, smarter, stronger, bigger than anyone else, but is not based on any facts or real world assessment,” Wolfstahl continued.

Trump has been known for making bellicose statements. Before his rapprochement with North Korean dictator Kim Jong Un, the president had threatened to subject the rogue communist regime to “fire and fury.”

More recently, the president has denied a story by Axios reporters Jonathan Swan and Margaret Talev that Trump suggested exploding a nuclear weapon inside a hurricane to dissipate the storm.

The Air Force is not currently exploring the feasibility of using nuclear bombs or missiles to destroy hurricanes, according to Military.com reporter Oriana Pawlyk.