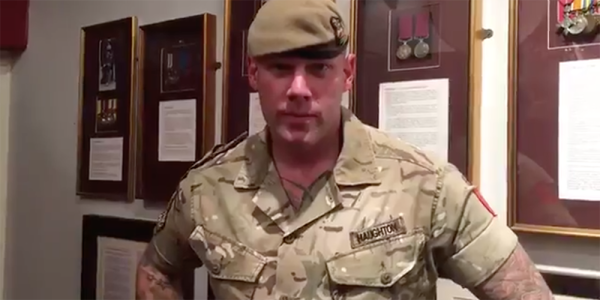 As race hate gains steam globally, Great Britain has been roiled by a few white-riot knuckleheads in its Army: Three of five men arrested last fall for membership in a neo-Nazi front were serving soldiers. Two of those service members were acquitted yesterday on terrorism charges, but one — Cpl. Mikko Vehvilainen — pled guilty to illegal possession of CS tear gas, which he'd held along with a shotgun, a crossbow with homemade projectiles, electrical wiring, custom body armor painted black, “a Hitler Youth knife and an SS ceremonial dagger,” a manifesto by the worst mass-shooter in history, and reams of violent anti-gay, anti-minority writings.

And Sgt. Maj. Glenn Haughton isn't fucking having it.

Haughton, the British Army's senior enlisted advisor — who actually was a warrant officer, but went back to the enlisted ranks specifically to take this job — cut a video message for the troops Friday morning, and it's fucking lit. The slightly street-accented, heavily tatted, perfectly bloused piledriver of an Iraq and Afghanistan veteran told his charges: If you're a dirty Nazi, get out fast. And if you know a dirty Nazi, you can help me nail him:

‘There is no place in the British Army for any form of racism’. Watch the video, retweet the video and spread the message 👍🏻 pic.twitter.com/igiVZ82mun

Here's the text of his message (emphasis added):

Alright, lots of you have been following the media coverage about a case in Birmingham Crown Court involving allegations of extreme racism against two British soldiers.

It’s good that they’ve been dealt with like this, in a civilian court, with a civilian jury. We might be soldiers, but we’re also citizens, and we’re bound by the law of the land. And I for one wouldn’t have it any other way.

The bottom line is this: There is no place in the British army whatsoever for any form of racism. That’s why one of our core values is respect for others. What’s difficult to understand about that?

If you’re a serving soldier or a would-be soldier, and you hold these intolerant and extremist views, as far as I’m concerned, there is no place for you in the British army. SO GET OUT.

I do not believe that right-wing extremism is an endemic problem in the British Army. But that doesn’t mean it doesn’t exist. Like any large organization, it might be there. It is the duty of every soldier if they see this behavior to have the moral courage to do something about it and report it up the chain of command.

Each of us has a responsibility to make sure that our great institution, the British Army, is a place where everybody can thrive, and an institution that our nation is proud of.

Bravo zulu to Haughton and the British Army. If this clip doesn't make you want to smash fascists, work on your sleeve rolls, and bang out more preacher curls, I can't help you.