US pilots’ close calls with Russian aircraft are likely to continue, experts say

"Given the unpredictability, you have to make sure that you maintain a safe distance and don't assume anything." 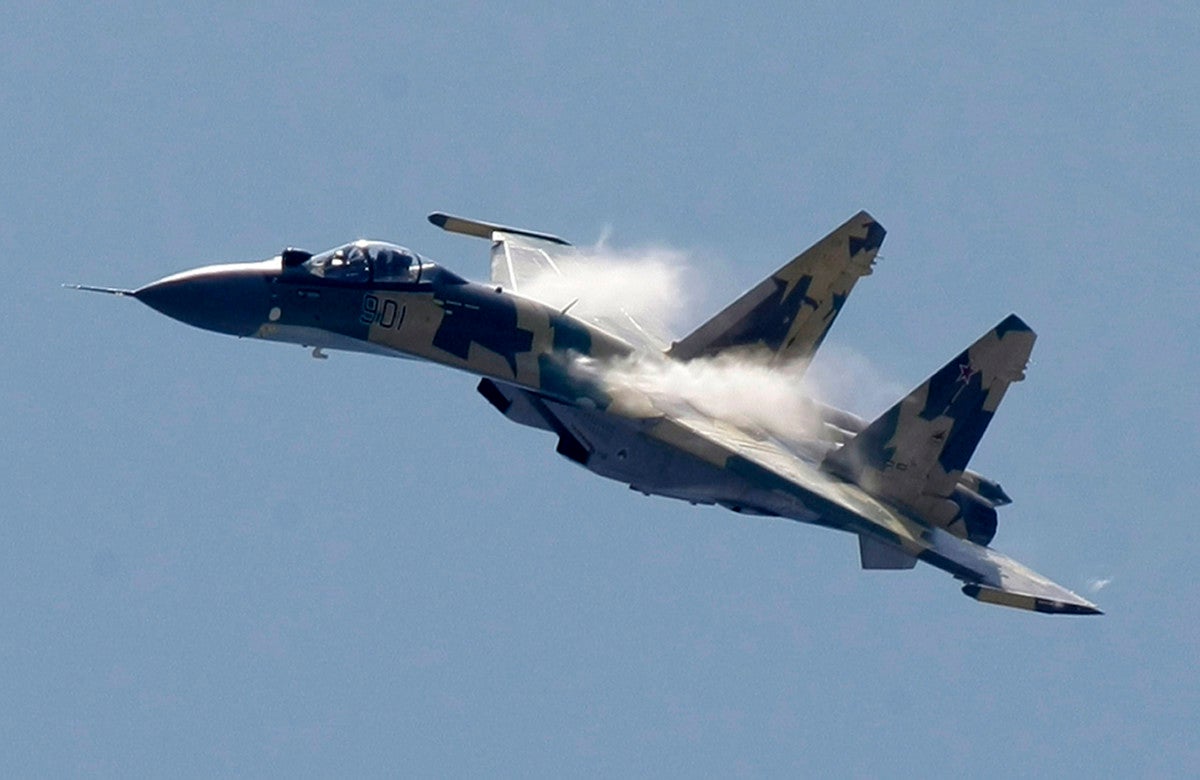 The U.S. Navy last week watched a single-seat Russian Sukhoi Su-35 Flanker-E come within 25 feet of a P-8A Poseidon reconnaissance aircraft while at high speed and inverted, causing wake turbulence and putting the U.S. “pilots and crew at risk” over the Mediterranean Sea.

Days later, another Flanker mimicked the move over the same waters, zooming in front of a P-8 and exposing the sub hunter aircraft to its jet exhaust.

Top U.S. officials in Europe and the Defense Department said the incidents involved Russian pilots behaving in an unsafe, unprofessional manner. Experts argue that, while the intercepts expose a pattern of behavior from the Russian military, they also show that Russia is willing to capitalize on the publicity the aerial maneuvers bring, even during a global pandemic.

Related: B-1 Returns to Pacific in 'Dynamic Force Employment'

The Russian military “feels as if it's necessary to let everybody know that they're still on the world stage, that they're still on the scene, and that they have pretty good military power,” said retired Gen. Frank Gorenc, the former commander of U.S. Air Forces in Europe. Gorenc, an F-15 Eagle pilot, headed the command during Russia's annexation of Crimea, when the U.S. sent sophisticated aircraft such as the F-22 Raptor to the theater in show-of-force missions to deter Russian aggression.

“It's not only the pandemic, which obviously is keeping the western countries occupied, but also the oil [crash] too,” he said in an interview this week.

In recent weeks, Russia, one of the world's leading oil exporters, was also hit by the unprecedented collapse in the market for crude oil.

“Declining powers have to do [something],” Gorenc said.

Unlike the Cold War, when pilots would return to their squadron and file a debrief of an aerial intercept, then simply move along to their next mission, being buzzed or barrel-rolled is gaining more visibility with the help of social media, said Doug Barrie, senior fellow for military aerospace for the International Institute for Strategic Studies, a London-based think tank.

“You know, it goes kind of viral,” Barrie said. “So you wonder if there's an element of that, of how it plays on social media and in wider Western media, whether or not if it's valuable.”

Notably, the recent incidents involved Russia's multi-role Su-35 fighter jet, which has received improvements over the last few years — a significant upgrade from other aircraft used in past intercepts, such as the Su-27 Flanker or the Su-24 Fencer, Barrie said.

“It's perhaps unsurprising that these aircraft have been bumped into [the rotation] more often than we've previously seen them; the imagery of the Flanker is great,” he said.

“The Su-35 is a highly capable airplane that they produce,” Gorenc added. “They're obviously … trying to sell it. And this is a good way to show it off.”

Gorenc stressed that, while these incidents tend to flare up once in a while, pilots need to stick to the rules of engagement and try to be as predictable as possible.

The 1972 bilateral Russia-U.S. agreement “Prevention of Incidents On and Over the High Seas,” followed by Incidents at Sea Agreement (INCSEA), are accords that establish basic “rules of the road” for both countries to safely navigate near one another.

Holding Russia accountable for its behavior in international airspace can be tricky, Barrie explained. “To some extent, these things are difficult to kind of legislate around because it really comes down to the units, the pilots [and their behavior],” he said.

More often than not, intercepts are conducted in a safe manner, but errors happen because of a loss of communication or a human or technical mistake, officials have said.

For example, then-Gen. Petr Pavel, the former chairman of the NATO Military Committee, told reporters in 2018 that most aerial scrambles are seen as “routine.”

“From time to time, we can see some measures as provocative, especially in the areas that we exercise … both to the ships and in the air,” he said. “But it's up to the captain [or pilot] to judge if it's dangerous or not.”

Last week, Air Force Gen. Tod Wolters, NATO supreme commander and head of U.S. European Command, described the first incident on April 15 as the result of “unprofessional” conduct by a Russian fighter pilot acting on his own, rather than a deliberate attempt by Moscow to provoke an incident.

“My conclusion at this point is that it was probably something more along the lines of unprofessional as opposed to deliberate,” Wolters said April 16.

“Given the unpredictability, you have to make sure that you maintain a safe distance and don't assume anything. Don't assume that they even see you, because they may not see you,” Gorenc said.

Like the U.S., it's unlikely that Russia will back down from what it sees as military priorities despite the pandemic, Barrie said.

“We're not completely dissimilar. … You can see the messaging coming out of these NATO nations, including the U.S., which says, 'OK, we recognize a pandemic is an enormous problem … but [we're still] taking care of the day-to-day national security needs,'” he said.

Air Force Gen. Terrence J. O'Shaughnessy, head of U.S. Northern Command, told reporters Tuesday that the U.S. military should be mindful that rivals like Russia will look to test any weaknesses among the U.S. and its allies during the coronavirus crisis.

“We are postured and maintain that ability to respond at a moment's notice,” he said.

On Friday, Defense Secretary Mark Esper renewed the message. “Our adversaries are not standing down,” he said. “We will continue to make sure that the [Defense Department] is ready to protect the USA.”

— Richard Sisk contributed to this report.